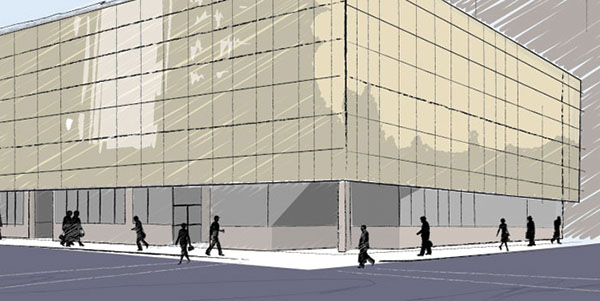 Gannon University’s School of Business and Engineering has had exciting changes in the recent months.

In addition to adding three new majors – healthcare management, supply chain management and industrial engineering – the college has also moved into a new building at 900 State St. along with the Erie Technology Incubator and the Small Business Development Center.

Previously, the Dahlkemper School of Business was located in Beyer Hall. The space the Erie Technology Incubator used to occupy will be renovated to house two engineering labs and offices for the department of mechanical engineering.

The new building at 900 State St., built in 1912, was used for Kresge’s Department Store before being turned into an office building.

William Scheller II, Ph. D., the dean of the college, said that about $7.1 million has been spent on the building in order to get it ready for staff and student use.

Scheller also said the building over the old building.

“Not only is it a better, overall environment than Beyer Hall, we have furnished the classrooms in such a way that it promotes active learning, group projects, things like that,” Scheller said. “Every classroom can be rapidly reconfigured to whatever the educational needs are for that particular class and then rapidly be put back.”

Scheller said that a special aspect of all of the conference rooms and classrooms is the whiteboard walls, which allow students or professors to write on the wall with a dry-erase marker and wipe it right off.

Conference rooms are placed throughout the building and are available for use by students and businesses.

Scheller also said one of the key concepts that he incorporated into the building was forced mixing of people. He said there are lounge areas and communal spaces throughout the building to encourage different types of people to mingle.

The main aspect of the new building is the innovative new Business Information Systems Laboratory. The lab is a one-of-a-kind learning space with the latest technology.

The lab is set up with six different groups of tables in the room, each of which has a 70-inch display monitor hanging on the wall for educational use. The display monitors can be used to project things from students’ personal devices, including smartphones, laptops and tablets.

Scheller said the lab is entirely unique to Gannon and is the “crown jewel” of the new building.

“One of the great challenges with this laboratory is nobody has this,” he said. “Gannon really does have a unique asset. Nobody has a space like this to learn in.”

In the lobby, a new, one-of-a-kind cross will hang above the stairwell. Scheller said he has commissioned an artist to design the cross, which will be an original piece of art.

Scheller said he is excited to see these changes happen for the College of Business and Engineering.

“This is what needs to happen,” Scheller said. “We need to have a college which addresses the needs of our students and our students’ eventual employers. And that means keeping up with technology and teaching students in a modern environment. This is a huge step forward for the college.”

However, Conrad Thibault, a senior sport marketing and management major, said the construction being done on the building is distracting.

“I wish the construction was done,” Thibault said. “It’s hard with power tools going off all day during class. That being said, I think it will be really nice when it’s done.

“The outside is really shiny; you can’t miss it. You’ll probably hear it before you see it.”

The new building is not finished yet, but is expected to be completed at the end of March.

The grand opening and blessing ceremony for the new building will take place at 11 a.m. on April 17.