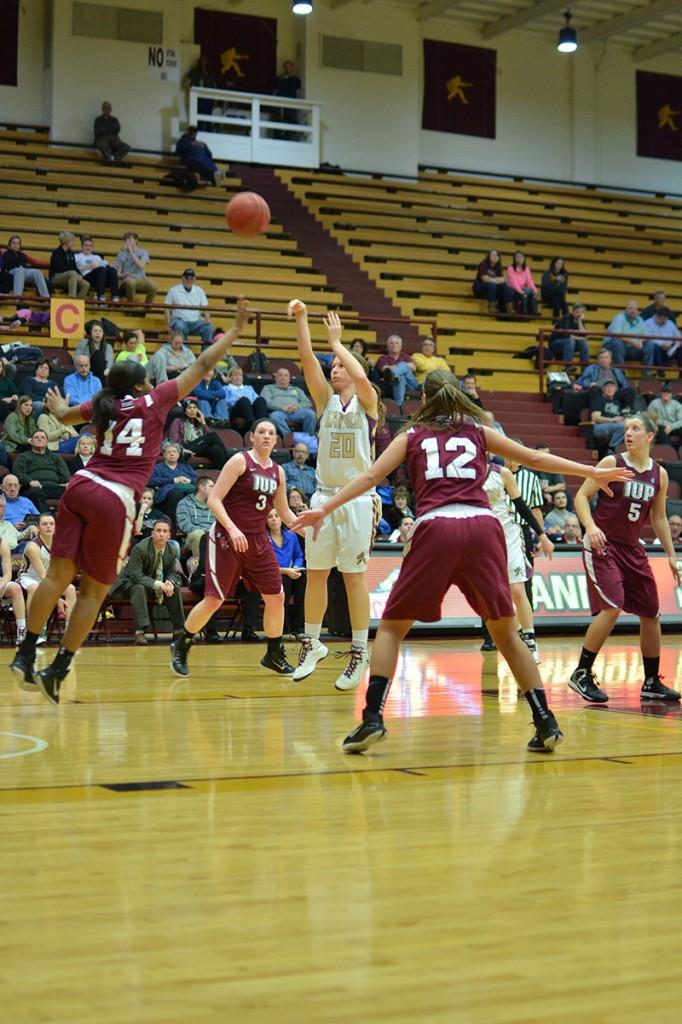 Wednesday’s contest against the Fighting Scots was the sixth time the teams have played in two years. Gannon edged Edinboro earlier in the year, 76-70, at the Hammermill Center, but did not prevail in overtime Wednesday.

Gannon shot 23 percent from the 3-point line and attempted five free throws the entire game. The Scots were also able to hold Nettie Blake to 11 points and seven rebounds.

Morgan Neighbors led the Knights with 13 points, as Blake and Neighbors were the only two players in double figures for Gannon.

The Knights looked to rebound Saturday in a game that matched the top two teams from the Pennsylvania State Athletic Conference Western Division. The game ended eerily similar to the two teams’ previous meeting in December, as IUP took Gannon down 74-51 in that contest.

Lindsay Stamp led the way for the Crimson Hawks with 25 points, 13 rebounds and three assists. IUP shot 45 percent on 10-for-22 shooting from the 3-point line, while Gannon shot 22 percent on 4-for-18 shooting. IUP also shot 43 percent from the field to Gannon’s 35 percent.

The Crimson Hawks also recorded 20 assists while only turning the ball over eight times, in comparison to Gannon’s 11 assists and 13 turnovers. The Crimson Hawks capitalized on turnovers, scoring 17 points off Gannon miscues.

Neighbors was the only Knight to score in double figures with 10 points and she added two assists and two rebounds. Blake also contributed seven points and seven rebounds.

Despite dropping two games in a row to conference foes, junior point guard Amanda Berchtold is confident the team will rebound.

“There is still plenty of basketball to be played, and anything can happen,” Berchtold said. “We hope to finish the season strong and get a good position for the playoffs.

“We’re not going to let those losses affect us – we just have to move on and get back to the way we were playing.”

Gannon, which is 15-6 overall, currently sits at in third place in the PSAC West with a 14-4 conference mark.

The Knights travel next to Clarion University to take on the Golden Eagles Wednesday, before returning home Saturday to host the University of Pittsburgh at Johnstown in the first game of the Gannon Athletics Hall of Fame doubleheader.

The Mountain Cats have the conference’s top-ranked scoring offense, but also have the worst scoring defense in the PSAC.

Pitt-Johnstown has two of the conference’s top four scorers in No. 3 Jasmine Harper at 16.6 points per game and No. 4 Kelsey Sleighter at 16.5 points per game.

Nettie Blake is the Knights’ top offensive threat and ranks No. 13 in the PSAC in scoring with 13.8 points per contest.