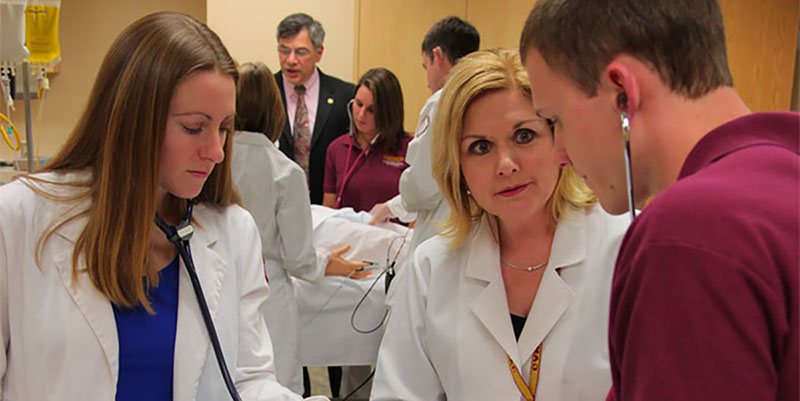 Gannon University’s Villa Maria School of Nursing can look into the future after it was granted full 10- year accreditation by the Commission on Collegiate Nursing Education (CCNE) of the American Association of Colleges of Nursing (AACN).

Each of the three certificates issued by the CCNE to Gannon University was for 10 years, the maximum time period for which accreditation is granted.

Certification was effective as of March 26, 2014 and will extend to December 31, 2024. The next site evaluation at Gannon for the purpose of accreditation will be in spring of 2024.

The Villa Maria School of Nursing belongs to the AACN, the institution that sets the standards for nursing education programs. CCNE is the accrediting body that visits schools on-site and evaluates whether schools of nursing fulfil the standards that the AACN sets.

The three-day accreditation process brought colleagues who looked at everything pertaining to the nursing programs, including files, records, curriculum and staff and student involvement.

The accreditors met with students, faculty, administration and also faculty in other departments, in addition to off-site visits to hospitals and nursing homes.

Accreditors also wanted to hear from the community about how Gannon’s nursing students are appreciated around town.

The Villa Maria School of Nursing originally belonged to the National League for Nursing, the accrediting body which focuses on associate and baccalaureate programs.

When the School of Nursing dissolved its associate degree program, it pursued the AACN, which enabled it to pursue accreditation for graduate degrees.

The Villa Maria School of Nursing is the biggest school and department in the Morosky College of Health Professions and Sciences in terms of faculty and divisions, with anywhere from 350 to 400 nursing students, most of whom are undergraduates.

The School of Nursing is very stringent in terms of its evaluation process.

In order to prepare for the accreditation, faculty, students and staff began organizing and evaluating curriculum, materials, and standards nearly a year and a half prior to the accreditation visit.

With specific traits such as the high level of student involvement and the high passing rates of the programs, the School of Nursing was awarded full accreditation without contingencies.

Director of Villa Maria School of Nursing Kathleen T. Patterson, Ph.D., said she is very confident that the high level of student involvement added an element of compassion to the evaluation of the programs.

“I think that the level of involvement of the faculty with the students is at a very high level,” Patterson said. “The students feel like they are being heard.”

Villa Maria School of Nursing’s newly reinstated accreditation will be a crucial piece of students’ education when they proceed to find a job.

Accreditation is important to employers because it lets them know that their employees were educated with the highest standards.

Patterson said her administrators and faculty were a large part of putting together an exceptional report to turn in to the CCNE.

“It was a substantial amount of time for the faculty because I firmly believe that they’re the people who draw the program,” Patterson said. “It’s not just me.”

Patterson also said the students involved in the program were a large part of the success as well because they volunteered their time to go to the meetings and reviews leading up to the accreditation.

Patterson said she would like to pursue accreditation of the doctorate program sometime around 2019. Patterson also wanted to formally acknowledge everyone who helped with the accreditation process.

“I would like to thank the students, the university, the faculty who came and met with our reviewers, as well as the community members who hosted visits from the reviewers,” Patterson said. “It was an overall gracious support.”