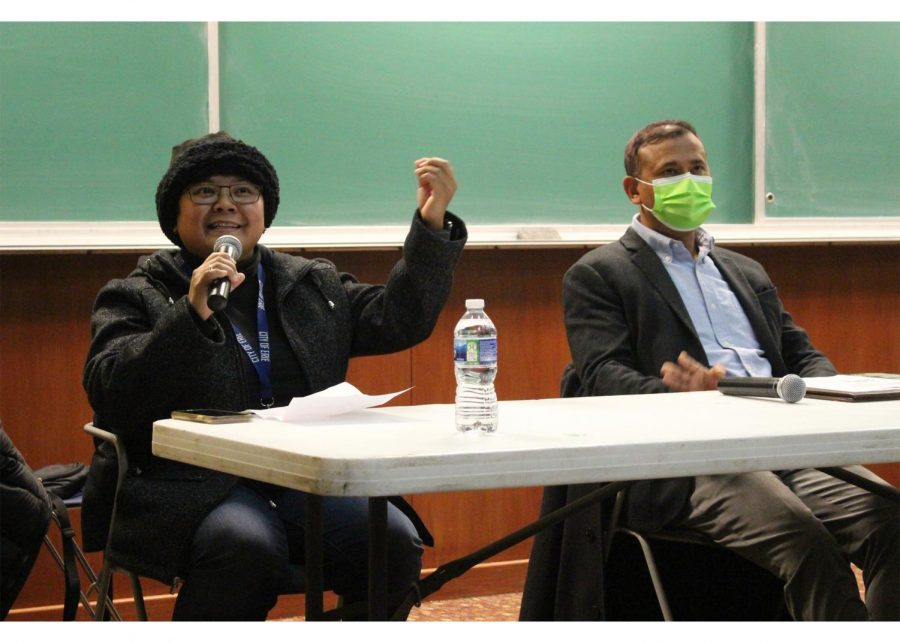 Erie is a city made up of people of all different backgrounds — people from different worlds, with different stories, all in one city.

“Erie’s Immigrant Stories,” a panel made up of prominent individuals from Erie’s immigrant community aiming to shed light on the multi-faceted immigrant experience in Erie, was held Monday in Room 104 of Gannon University’s Zurn Science Center.

Around 70 students and staff members were in attendance.

The event was the last installment for the semester of the CHESS Speaker Series “Reinventing Right Now.” The year-long series focuses on navigating a world that has been changed by the events of 2020 and 2021, and offers suggestions for how to begin unified healing.

Lori Lindley, Ph.D., dean of the College of Humanities, Education and Social Sciences, introduced the event.

Following Lindley was Kaustav Mukherjee, who holds a doctorate in philosophy and is an assistant professor in the English department at Gannon.

“What we have today is more than numbers — we have stories,” Mukherjee said.

Asif Shakoor, a doctor and native of Pakistan and one of the panelists, began by reciting “Wandering Spirit,” an original poem chronicling the sentiment of an American immigrant.

“I am a mosaic of many cultures that walk silently under the vastness of your spacious blue sky,” the poem said.

After that, Shakoor and the other three panelists — Syed Khalid Rizvi (who joined virtually), a native of India and a professor of criminal justice at Everest College and former police officer; Nanda Chuwan, a native of Bhutan and an employment specialist for the U.S. Committee for Refugees and Immigrants in Erie; and Niken Astari Carpenter, a native of Indonesia and New American Liason for the City of Erie, shared where they came from and their background stories.

Shakoor went on to describe his experience as a Sufi mystic. Sufism is a mystical Islamic tradition that emphasizes seeking the truth of divine love and knowledge through direct and personal experience with a higher power.

“You have to open the doors to your consciousness and let your imagination run wild,” Shakoor said.

Chuwan went on to describe his experience coming to America. He said the transition was very difficult and described it as “culture shock.” It was hard to navigate the many changes that come with immigration.

“There is a network across America,” Carpenter said. “I know what the community is doing here. We can make it.”

Rizvi went on to discuss the diversity of the Erie community.

“Erie stands out as a welcoming city,” Rizvi said. “This is a city of immigrants. This is a city that has always welcomed new people.”

However, Erie’s population is dwindling. Immigrants play a large role in regulating the population.

“The immigrant community has made a huge impact in controlling it and getting it back to balance,” Rizvi said.

Shakoor said that as an immigrant, it was difficult for him to excel in school. He failed all of his standardized tests because he couldn’t speak English, and even was placed in the special education program.

However, when his handball coach approached him and encouraged him to take an honors English course, Shakoor’s entire outlook on education shifted.

“When he put me in that class, the whole world changed,” Shakoor said. “It sparked something inside me that was always there.”

Shakoor went on to be the first in his family to go to college and attempt medical school. This was revolutionary in Pakistan.

“When you are poor you are treated worse than animals,” Shakoor said. “When you live in a caste system you can never be anything more than that.”

However, Shakoor said that Erie is a land of opportunity for immigrants.