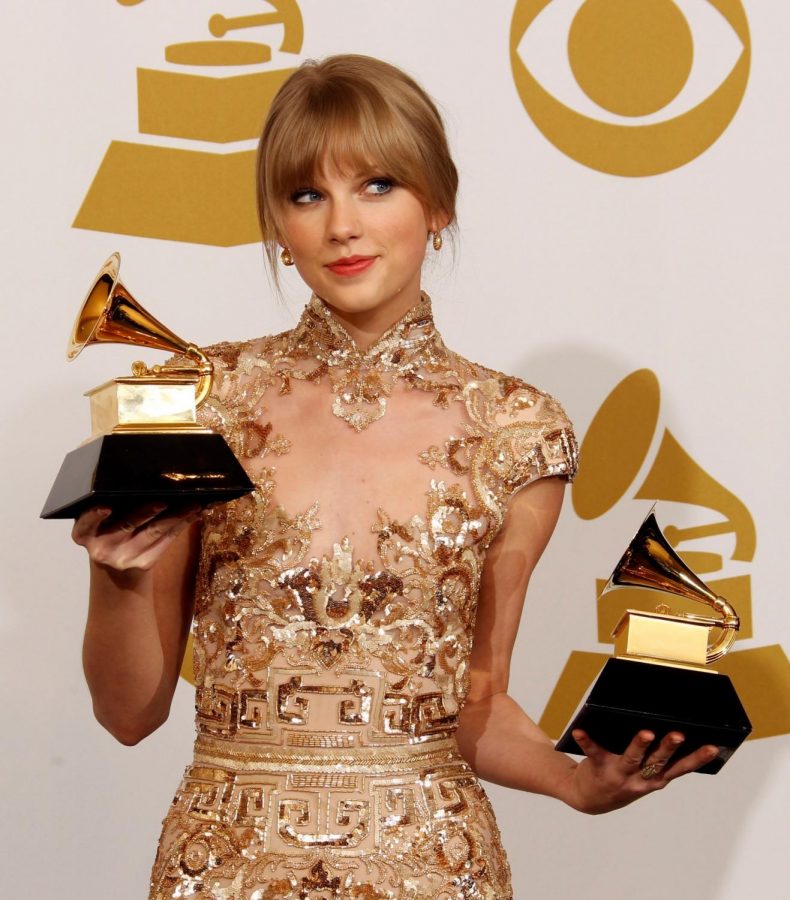 Swift pops off at the 2012 Grammys just eight months before releasing iconic first version of the “Red” album.

One may wonder why Swift has chosen to rerecord her albums. This is the result of conflict between the American singer, Scott Borchetta, and music industry mogul Scooter Braun.

Swift was faced with a decision: whether to stay with BMLG and by Borchetta’s terms, “earn” back each of her first six albums one at a time or walk away. Ultimately, Swift walked away from this deal to join Universal Music Group.

Swift announced the release of “Red (Taylor’s Version)” on Aug. 6. Since then, she has not released a lead single, further ramping up the anticipation for the album.

“Red” was Swift’s first real dabble into pop music, preceding the sensation of her fifth album, “1989.” Tracks like “I Knew You Were Trouble,” “We Are Never Ever Getting Back Together” and “22” all were huge hits for Swift.

This album masterfully showcases Swift’s songwriting when dealing with heartbreak. Lyrics of “Sad Beautiful Tragic,” “The Last Time” and “All Too Well” all demonstrate the artist’s lyrical, tear-jerking abilities.

Further, “All Too Well” is uniquely featured twice on Swift’s latest re-recording track-list preview. Its second appearance is a part of the vault tracks — additional songs that she had written for the album — in its original 10-minute form.

Swift posted to her social media accounts Thursday announcing a short film for this version of “All Too Well.” It stars Sadie Sink, known for her role in Netflix’s “Stranger Things,” and Dylan O’Brien, popularly known for “The Maze Runner” trilogy and “Teen Wolf” series.

Swift will also star; it is noteworthy that she wrote and directed the short film.

Beyond “All Too Well’s” 10-minute version, many Swifties are greatly looking forward to the other nine vault tracks.

For these titles, Swift has employed multiple features, including Phoebe Bridgers, Chris Stapleton and Ed Sheeran. Sheeran is also to appear on “Everything Has Changed (Taylor’s Version).”

Two of the songs from the vault are songs written by Swift that were given to other artists — “Better Man” to Little Big Town, and “Babe” to Sugarland.

There is one song that is genuinely special among the 30 songs on “Red (Taylor’s Version):” “Ronan.”

This song was written in remembrance of a 4-year-old fan who died of cancer. Co-writing credit on this song is given to Ronan’s mother, Maya Thompson.

It is a popular trend on the TikTok app for creators to rank artists albums. Swifties across the platform have been urging each other to not include “Ronan” in these rankings due to its origin and purpose.

This week, Swift is set to appear on “Late Night with Seth Meyers,” “The Tonight Show with Jimmy Fallon” and “Saturday Night Live” in anticipation of release of “Red (Taylor’s Version).”

All things considered, Swift and her dedicated fan base may not be getting much rest this week. But as the lyrics of “22” say, “It feels like one of those nights / We won’t be sleeping.”

Swift’s version of “Red” will be available to stream and purchase Friday.