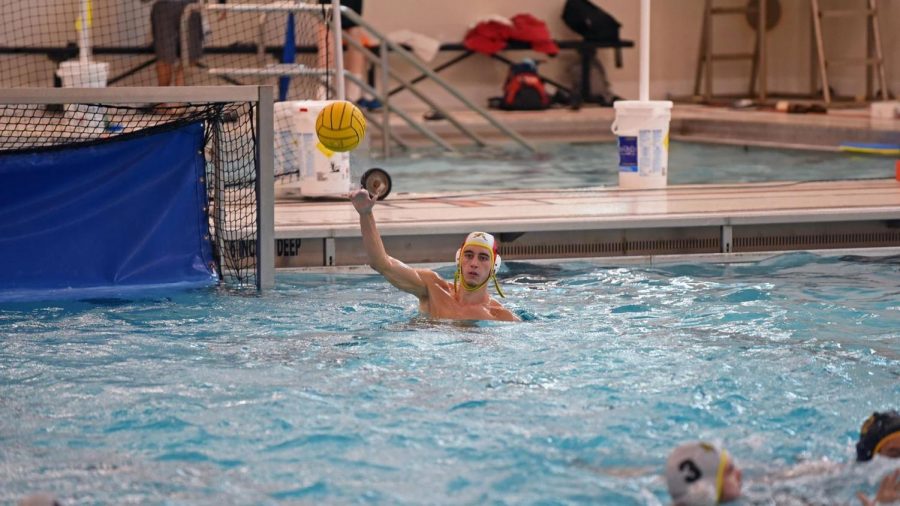 Gannon goalie Jacob Hollo makes a pass for the men’s water polo team this past weekend against Mercyhurst University. The Knights went 2-0 on the weekend, also beating Mount St. Mary’s.

Coming off an 18-4 season and a Mid-Atlantic Water Polo Conference (MAWPC)-West championship, the Gannon men’s water polo team has picked up right where it left off, starting this year 3-0.

Men’s water polo usually competes during the fall, but the pandemic has pushed Gannon’s season back to the spring.

Led by coach Shane Unger, in his third year coaching both the men’s and women’s team, Gannon has proven to be a powerhouse in the MAWPC-West. In his first year, Gannon had a 20-1 record and placed third in the MAWPC regional championship.

Last year, he led the team to an 18-4 record and a MAWPC-West championship, and this year the team is looking to replicate that success.

Beginning the year with a thumping of Mount St. Mary’s, Gannon broke the school record for most goals in a game with 26. That same game also set a Gannon record with a 21-goal differential.

The Knights’ dominance continued over the weekend at the Mount St. Mary’s tournament, beating the host, 22-10, and then defeating Mercyhurst in a lower-scoring matchup, 9-6. These two games marked the first MAWPC action for them this season.

They are currently in first place in the MAWPC-West with four points.

Sophomore Jacob Hollo has a 3-0 record for the team in goal and has a .700 save percentage while giving up only 5.57 goals per game.

Hollo was the 2019 MAWPC-West rookie of the year as well as being named to the MAWPC-West first team last year.

“I have seen many positive things that we can build on,” Unger said. “We have a deeper team this year, which means I can put more of the players off the bench into a game with confidence. We can always become better defensively. Offense wins games; defense wins championships.”

As far as an end-goal for the season, Unger has his eyes on the postseason.

“Our goal is to win the MAWPC West every year and make it to the overall MAWPC conference championship tournament,” Unger said. “This tournament includes high level Division-I teams, so being able to make consistent appearances at that tournament and move up the ladder against those teams will help elevate our program on the national scale.”

Senior Lucas Petzold, who has six goals on the year, thinks experience has helped lead this team to victories early on.

“One of the main factors to our success has been our experience,” says Petzold. “We have a lot of upperclassmen and have also played together a little bit this fall. The new additions to our team have also been huge.”

The Knights will look to continue their success Saturday at the Salem Invitational, where they will take on Salem and McKendree in more MAWPC-West action.