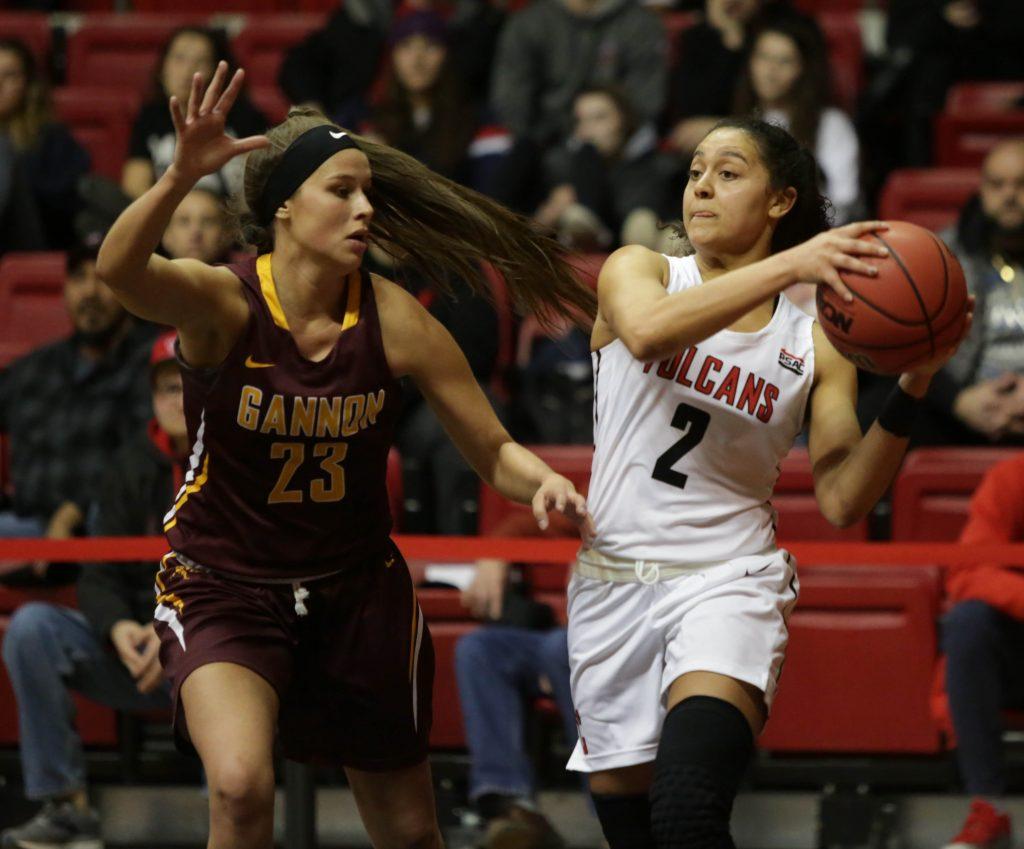 The 2019-20 season was a year to remember for the Gannon University women’s basketball team.

Despite being ranked sixth in the PSAC in the preseason polls, the Knights went 25-6 overall and 18-4 in PSAC play.

They defeated top-seeded Indiana University of Pennsylvania in the PSAC championship game in a defensive battle that ended 50-40.

Gannon was ranked as the second seed in the NCAA Atlantic Regional tournament before it was canceled due to COVID-19.

The Knights were led by a trio of seniors in Tori Obenrader, Chelsea Rourke and Haley Tewes.

Gannon will be forced to look elsewhere to make up for the lost production of those three seniors.

Gannon added two freshmen to its roster for this season, as well as a transfer student in Emma Wright from Grand Valley State University.

Although there are many people from the team to give credit to for its amazing run, coach Wright may deserve the most praise.

Wright came back to Gannon this past year for his second stint, and 13th year total coaching the team.

After moving on from Gannon, he went on to be the head coach at Miami University (Ohio) from 2013-17 and the associate head coach at Eastern Illinois for the next two seasons.

When he left Gannon in 2013, he was already the all-time winningest basketball coach in Gannon history, producing a 233-100 record in 11 seasons in Erie.

Looking forward to this season, the head coach of the Knights is keeping it simple and doing the little things to help his team stay prepared.

“This year’s team is taking everything one day at a time,” Wright said. “We don’t know what this season will look like. We just want to be ready for whatever this season has in store. We want to control the controllables — our attitude, effort, behavior and preparation.”

And although his impact on the court has been significant, he’s looking to make even more of a difference moving forward at Gannon.

This past season, he introduced three charitable games that the Knights took part in, the “Goals for Life” game, the SERVE game and the CARE game, which replaced the annual Pink-Zone game.

These games helped raise awareness and funding for cancer and youth poverty.

The SERVE Game focused on addressing youth poverty in Erie, and the inaugural outing made a great impact during its first year.

“We worked with the Erie Catholic School System to provide needed items for two local organizations who work with children in need: Kids Café’ and the Neighborhood Art House,” said Wright. “The event was well-received, and we raised over 32,000 items!

“This is a special game to me because it addresses a major need in the city of Erie, a chance to serve our community, and the opportunity to foster cooperation with other like organizations.”

These games are expected to be brought back this season.

The schedule for the women’s basketball team has not been released yet. It should be released soon, as the Knights’ season is supposed to start this winter.