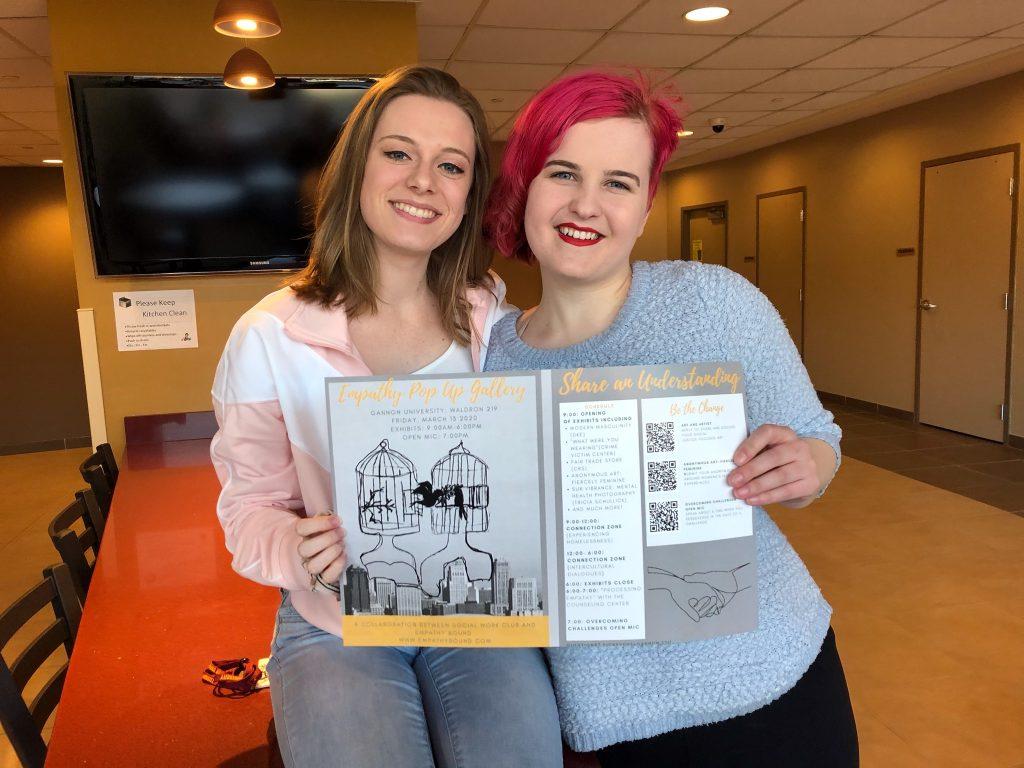 Due to unforeseen circumstances, the decision was made Wednesday morning, March 11, to postpone the Empathy Pop-Up Gallery scheduled for Friday of this week. Information will be disseminated once the event has been rescheduled. Questions can be directed to [email protected] The organizers appreciate your patience and flexibility, and look forward to bringing this powerful event to the student body at a later date.

This decision was made after our publication deadline. The following story ran in the March 11 print edition of The Knight:

A group of dedicated individuals and organizations, spearheaded by sophomore social work major Katie Dickey, are bringing an immersive, empathy-based experience to campus Friday.
Dickey’s vision for the event began developing back in high school, while she was a student at Our Lady of the Sacred Heart in suburban Pittsburgh.
Under the mentorship of Theresa Long, a beloved English teacher, Dickey became acutely aware of the need for empathy. The pair came together to form Empathy Unbound, a project dedicated to filling this need.
From the beginning, Dickey and Long aimed to host large-scale events to reach as many people as possible with the transformative power of connection. With the help of the Social Work Club and a litany of other partners, this vision is finally coming to fruition.
Dickey’s personal journey through mental illness has shaped her worldview significantly. She wound up in the inpatient mental health system at the age of 14, with periods of relapse and recovery coming in waves in the years since.
“We do not live in a linear fashion,” Dickey said. “We cannot pin people as just their suffering or just their triumphs – we are all a combination of experiences and moments.”
At the event, participants will be able to move from booth to booth and talk to people to learn about their experiences – individuals who have experienced homelessness, individuals who work with sexual assault survivors and global students will be represented, as well as organizations such as Delta Kappa Epsilon fraternity and the LGBTQ+ club.
Ryan Hamilton, a senior economics and finance double major, is helping to compile DKE’s exhibit on masculinity. Their exhibit will consist of a visual and written presentation on how the brothers’ ideas of manhood may differ from cultural norms.
Compiling the exhibit has given Hamilton pause to consider his own masculinity.
“Specifically, I think vulnerability is key to the human experience and something men subdue that part of themselves,’” Hamilton said.
“The exhibit will provide space to consider the culture of toxic masculinity that runs rampant in the college environment and how we are all challenged to not follow a single script.”
Another group making an appearance alongside DKE is Gannon’s LGBTQ+ club.
Jessica Belousov, a sophomore English major, is helping to curate the club’s exhibit.
Poems written and recorded by members of the group will be playing on a loop on Belousov’s laptop, and artwork will also be displayed.
“I think this event will remind people of the LGBTQ+ community that is thriving on campus,” Belousov said.
“I hope people enjoy the artwork and are reminded of the underlying human experiences they share with their LGBTQ+ friends, classmates, co-workers and neighbors.”
The Empathy Pop-Up Gallery takes place 9 a.m. to 6 p.m. Friday in Waldron 219. Participants will receive a ticket with prompts to take part in the experience. Admission is free and open to the community.
A one-hour debriefing will be held 6 p.m. to 7 p.m. in Gannon’s counseling center, and the Gallery will resume with an open mic session at 7 p.m. back in Waldron 219.
At the open mic, students will be able to tell stories, read poetry or share about their experiences overcoming challenges.
“Empathy grows out of organic moments of connection, so don’t expect a performance, but instead a comfortable and homey environment,” Dickey said. “Come willing to share and listen, and with an openness to understanding something you haven’t experienced yourself.”