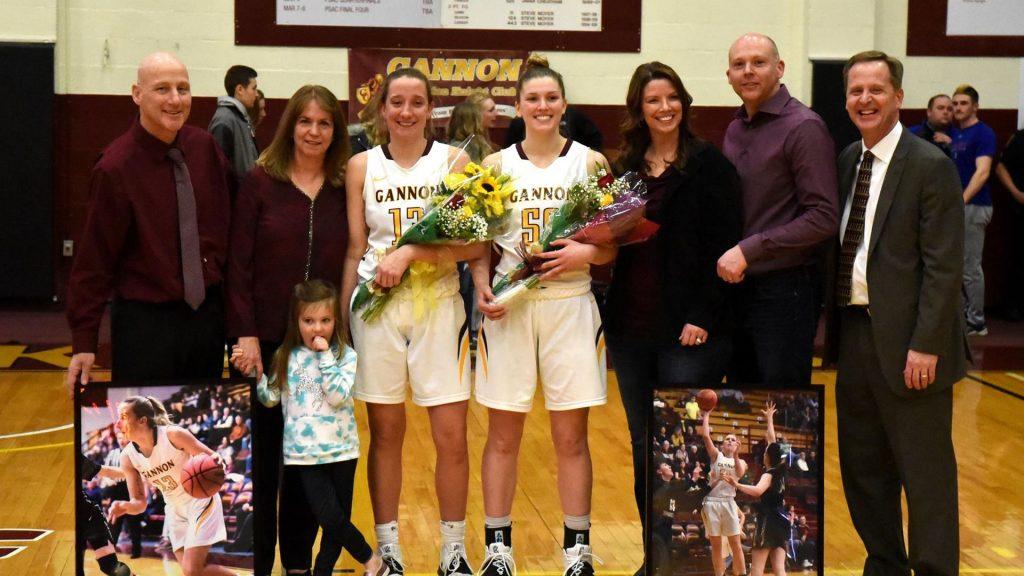 Gannon University’s women’s basketball team cruised to two blowout wins at the Hammermill Center this past week after debuting as the No. 5 team in the NCAA Atlantic Region’s rankings.
The Knights got the week started with an 88-61 win over Clarion on Feb. 19, a game in which 12 players registered points, and then followed with an 87-50 whipping of Slippery Rock Saturday.
Tori Obenrader led all scorers in the win over Clarion with 19 points and also paced the scoring with 18 against Slippery Rock.
The wins boosted Gannon’s overall record to 21-6 and put the Knights 17-4 in Pennsylvania State Athletic Conference play going into their final regular-season game of the season at 1 p.m. Saturday at California University of Pennsylvania.
Gannon will then move on to the PSAC Tournament, which begins Monday and runs through Sunday. The Knights already have wrapped up the No. 2 tournament seed, and they’ll host a quarterfinal game at 6 p.m. Wednesday, March 4.
Gannon used a 9-2 run to open its game against Clarion, taking control right away. The Knights outscored Clarion (4-22, 2-18) 27-12 in the first quarter, as six Gannon players were on the board in the first quarter alone.
Two straight layups from Chelsea Rourke and a three from Sydney Mitchell sparked a 9-0 Knights run to match a 5-0 Golden Eagle run. Daria-Hanna Koul, Ali Benim and Emily Poling also all scored before the end of the half to help Gannon build a 46-26 lead going into the break.
Clarion used an 8-1 run to spark a bit of momentum coming out of the locker room, cutting into the Gannon lead. However, Poling knocked down a 3-pointer at the 2:52 mark of the third to spark another Knights run, this one being 9-2, to close out the quarter.
Gannon didn’t let up going into the fourth quarter, as it mounted an 18-4 run to put this contest away and come out with an impressive 27-point win. Haley Tewes tallied her third double-double of the year with 14 points and 10 rebounds, while Rourke also added 12 points, five rebounds and four assists. Delaney Dogan also chipped in a career-high 10 points in the winning effort.
The Knights did not let their foot off the gas against PSAC West foe Slippery Rock on Saturday, as they rolled to a 37-point win to complete their fourth sweep of conference opponents this season on Senior Night at the Hammermill Center.
Led by Obenrader’s 18 points and 10 rebounds, Gannon tallied 85 or more points for the second time in as many games.
The Rock (8-18, 6-14) jumped out to an early lead, 8-3, at the first media timeout. However, the Knights came out of the timeout and rattled off eight straight points of their own, six of which came from the foul line.
Rourke, one of two seniors on the team, nailed a three to end the quarter and give Gannon a 20-12 lead.
After a 5-0 Rock run, Dogan tallied four straight points, Rourke scored on a driving layup and Boston McKinney forced a steal and connected with a layup on the other end, forcing a Slippery Rock timeout. A three from Rourke sparked another Gannon run, this one 12-4, and gave Gannon a 20-point lead heading into halftime.
The Knights came out of the locker room after halftime and picked up right where they left off with a 9-0 run that included 3-pointers from Obenrader and Mitchell. Obenrader then connected on another three out of a Slippery Rock timeout to give Gannon a 30-point lead.
The Knights picked up in the fourth quarter right where they left off in the first three, as they went on a 12-0 run, holding the Rock scoreless for four minutes and 26 seconds of game time.
This run would help to solidify the 37-point win for Gannon in its last home game of the year.
In addition to Obenrader’s team-leading 18 points, Rourke and Mitchell both had 16.
Tewes also contributed six points, as she was honored as the other Gannon senior.
The Knights improved to 21-0 on the year when at least three players score in double-figures.