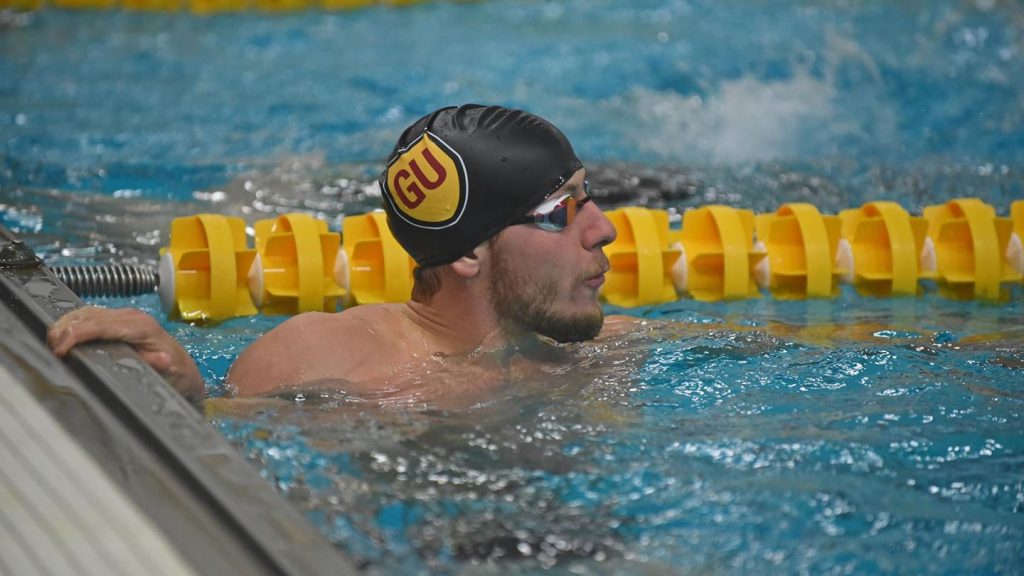 The Gannon University men’s swim team was very successful over the weekend, finishing third overall at the 2020 Pennsylvania State Athletic Conference Championships, which started Feb. 19 and ended Sunday at the Graham Aquatic Center in York.
Besides finishing third as a team, Gannon had numerous podium appearances by its talented squad.
During the first day, the Knights’ 200 medley relay of Justin Decheck, David Gallion, Luke Engel and Clark Eason finished third with a time of 1 minute, 32.40 seconds.
Continuing Gannon’s success was Erie native and McDowell grad Robert Bolmanski, who finished third in the 1,000 freestyle with a time of 9:35.76. Teammate Alex Deemer finished fifth in 9:39.41.
Brent Benedict provided a highlight for the Knights, winning the 50 free in 20.07. With that time Benedict made the NCAA B cut. Also making the NCAA B cut was Eason with a 20.75, which was good for fourth place.
Finishing right behind Eason was Engel in 21.05.
Finally finishing the night in a spectacular way was the Knights’ 800 freestyle relay group of Bolmanski, Joey Deemer, Alex Deemer and Benedict, which finished first with a school-record time of 6:46.17.
Day 2 was just as successful – if not more so – for Gannon. For starters, the Knights’ 200 freestyle relay team of Benedict, Andrew Mahoney, Engel and Eason finished second with a time of 1:22.25.
Benedict once again destroyed the competition in an individual event, as he won the 100 butterfly in 47.31. In the process, Benedict broke the Gannon record and the PSAC record, and also made the NCAA B cut.
Bolmanski also earned the title of PSAC champion, winning the 200 free in 1:40.43. And the 400 medley relay quartet of Decheck, Gallion, Engel and Eason capped the night by finishing third with a time of 3:25.91.
The third day of competition featured more impressive – and record-breaking – performances. Bolmanski finished second in the 500 free with a time of 4:32.14, making the NCAA B cut. Benedict dominated again, breaking yet another school mark and a PSAC record and making the NCAA B cut while winning the 100 backstroke with a time of 48.01.
Swimming against Benedict and also making the podium was Decheck, who finished fourth with a time of 51.06. Gallion took fifth place in the 200 butterfly with a time of 1:52.02.
The final day for the men’s team also saw some solid performances.
Alex Deemer finished third in the 1,650 free in 16:09.75 and Joey Deemer placed seventh in the same event in 16:21.66.
Benedict shattered yet another Gannon and PSAC mark by winning the 100 free in an NCAA B cut time of 44.72.
Freshman Andrew Beyer finished fifth overall in the 200 backstroke with a 1:54.06. Finishing the meet in style, the 400 freestyle relay team of Engel, Eason, Bolmanski and Benedict captured first place with a time of 3:02.54.
The Gannon women’s team wound up sixth and had its moments of success as well.
Zoe Snyder finished fourth in the 50 free with a 23.72, qualifying for the NCAA B cut. Silvija Taraska placed third in the 200 free with another NCAA B cut time of 1:52.43.
Taraska later broke a school record with a 1:04.02 to finish fourth in the 100 breaststroke, qualifying for the NCAA B cut. She earned yet another B cut by finishing fourth in the 100 free in 52.12.
The 400 freestyle relay team of Allison Ahl, Snyder, Celia Kottakis and Taraska finished second with a time of 3:30.77.