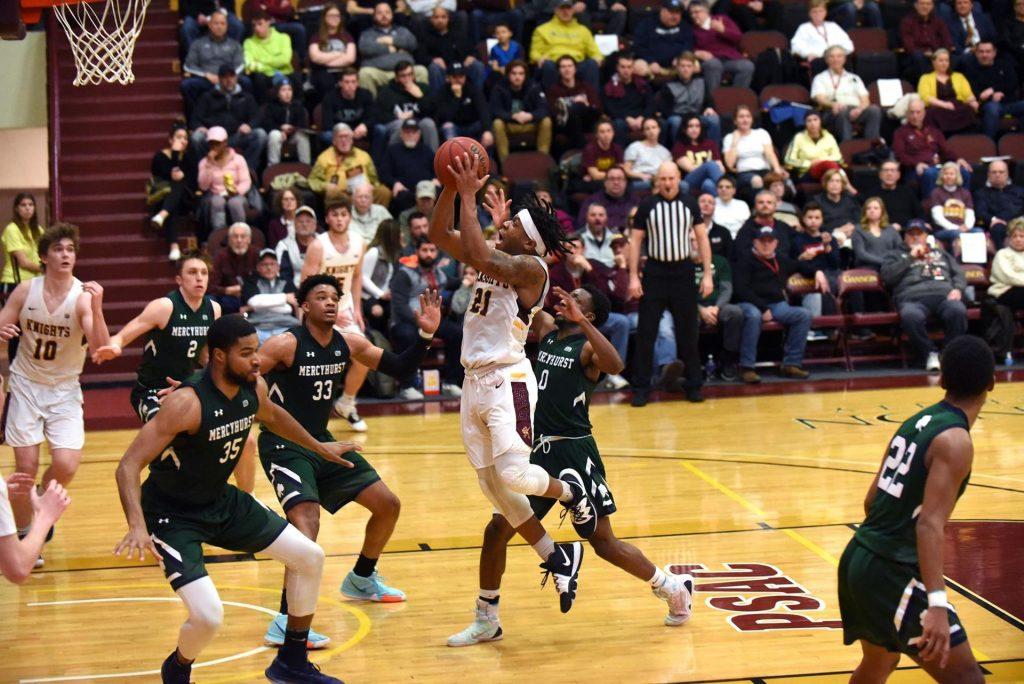 The Gannon University men’s basketball team saw its five-game winning streak come to a painful halt last week, as it lost at home to crosstown rival Mercyhurst, 56-51, on Feb. 12 and then came up just two points short to highly ranked Indiana University of Pennsylvania Saturday on the road.
The back-to-back setbacks left the Knights with an overall record of 12-11 and an 11-8 mark in Pennsylvania State Athletic Conference action going into Wednesday’s 7:30 p.m. matchup with Clarion at the Hammermill Center.
Gannon got off to a good start against Mercyhurst at the Hammermill Center, jumping out to a 13-3 lead four minutes into the game due in part to a pair of quick threes from freshman shooting guard Chris Clancy.
But the Lakers tied the game at 16-16 10 minutes into the half with a three from Zach McIntire, and the next possession gave Mercyhurst a three-point lead with another deep ball from Michael Bradley.
The rivals exchanged leads four more times before Steve Cannady hit a three to put the Lakers up five points going into the half.
Gannon opened the second half with a 12-3 run fueled by DeAnte Cisero’s five consecutive field goals.
Cisero would end the game with 13 points and five boards.
The Lakers ended the run by nailing another triple to cut the Knights’ lead to one with 13:25 left to play. The game remained tight the rest of the way, and with 26 seconds left on the clock the teams were tied at 51-51. Mercyhurst hit five free throws down the stretch to take the Porreco Cup and finish the regular season sweep of Gannon.
Matt Johnson led the Knights in scoring with 15 to go along with eight rebounds and a game-high seven assists. Mercyhurst’s MiyKah McIntosh led all scorers with 16 points.
The competition didn’t get any easier for the Knights, as they traveled to Indiana, Pa., Saturday evening to face the highly regarded Crimson Hawks, who had to battle to come away with an 85-83 win at Kovalchick Complex.
The PSAC West-leading Hawks, ranked No. 9 among all Division II schools, traded blows with Gannon while both teams got off to a slow start, tied at 6-6 after four minutes of play.
IUP was able to break away to a lead as high as 12 though in the first half, thanks to Armoni Foster’s 20-point first-half performance.
Gannon snuck back into contention with a run of its own, taking the lead at one point and entering halftime down two.
The Knights kept the game close in the second half and even took a 76-75 lead with less than 2½ minutes to play.
But back-to-back triples and free throws from the Hawks’ Malik Miller put IUP up five with only 18 seconds to play. The deficit proved too large for Gannon.
Miller finished with 30 points and Foster with 26 for the streaking Hawks. Erie native Dave Morris ended the night with 11 points.
Gannon had five double digit scorers: Cisero led the way with 18, followed by Frank Webb Jr. with 17, Maximiliano Andreatta with 13, Johnson with 10 and Victor Olawoye with 10.
The Knights, who have already secured a spot in the PSAC Tournament, will close out their home season at 7:30 p.m. Saturday against Slippery Rock.
Gannon will play its final regular-season game Saturday, Feb. 29, at California University of Pennsylvania.