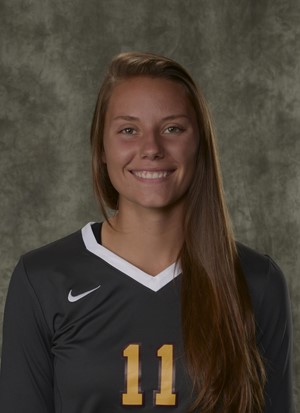 For many athletes, just being able to play with their teammates and have their support is one of the greatest experiences they have playing on a collegiate sports team.
This is true for one of the senior women’s volleyball players here at Gannon University, Ally Smith.
Smith is from Penfield, N.Y., and attended high school at Webster Schroeder High School in Webster, N.Y.
Her interest in volleyball began when she was just a young girl, from watching her brother play to peppering at home with her sister. She then began playing for a club team when she was in third grade. Her love for the sport grew from that point on and ultimately brought her to coach Matt Darling’s Gannon Knights.
In Smith’s freshman year at Gannon she was named a Pennsylvania State Athletic Conference Scholar-Athlete.
In her sophomore year, she received the NCAA Division II Athletics Directors Association (ADA) Academic Achievement Award and was ranked second among the Knights in kills (351) and second in points (414).
Smith was also named to the All-PSAC second team, was PSAC Northwest Division Player of the Week four times and Eastern College Athletic Conference (ECAC) Offensive Player of the Week twice.
Smith started in all 29 matches she played in her junior year and was named PSAC Northwest Volleyball Athlete of the Week twice. She enters her senior year 11th all-time since 2002 in career kills/set and is 11th in career service aces/set.
“Playing for the Gannon volleyball team is the best experience I could have asked for,” Smith said of her time with the Knights.
“I get to play alongside amazing players and people. We have a supportive coach who can push us and help us reach our full potential. The chemistry we have with one another is one of the strongest parts of our team.
“We play for each other and truly love one another other. We would do anything for each other on and off the court.”
For Smith, her team has been her biggest motivators and supporters.
One of her top moments as a player was the Knights making the NCAA Final Four tournament in 2017 and being able to go so far and represent Gannon. Smith said that the team had so much support from the school as well along the way.
Smith did face a setback her sophomore year, and that was spraining her ankle. She said it was hard because she needed to wait for it to heal before she could continue to do what she loves, but also said with the help of her teammates, coaches and trainers she was able to get back onto the court in no time.
Smith admitted that she has mixed emotions regarding her final season with the Knights.
“Senior seasons are always bittersweet,” she said. “I am excited for another year with this team but also sad to leave it behind.
“Even though I am moving on to new things, I will cherish the memories I have made on the Gannon volleyball team forever.”
Smith, who is also a member of the Kappa Delta Pi fraternity of Education, said that after graduation she hopes to take her education major into teaching, as well as further her sports career in becoming a volleyball coach. But she has one more goal on the court before graduation – returning to the NCAA tournament as a team. There’s a long way to go before that is determined, as the Knights are just eight matches into their 2019 season.
So far, Gannon – a unanimous preseason pick to win the PSAC Northwest — has split those eight matches and last weekend went 2-2 at the UIndy Invitational in Indianapolis.
Gannon lost to Illinois-Springfield and Northern Michigan by identical 3-0 scores while beating Indianapolis, 3-2, and sweeping Minnesota State-Moorhead 3-0.
Lauren Sampson and Ashley McClung led the way in the win over Minnesota State-Moorhead with 16 and 10 kills, respectively, while Smith contributed nine kills of her own.
Smith also registered nine kills in the Knights’ victorious effort over Indianapolis. Sampson paced all players with 14 kills while McClung and Maggie Greenfield matched Smith with nine kills.
The Knights will finally make their home debut this weekend, taking on St. Rose and Walsh at 3 p.m. and 6 p.m., respectively, Friday at the Hammermill Center in the Gannon-Edinboro Tournament.
Gannon also will be in action once Saturday – at noon against St. Rose.