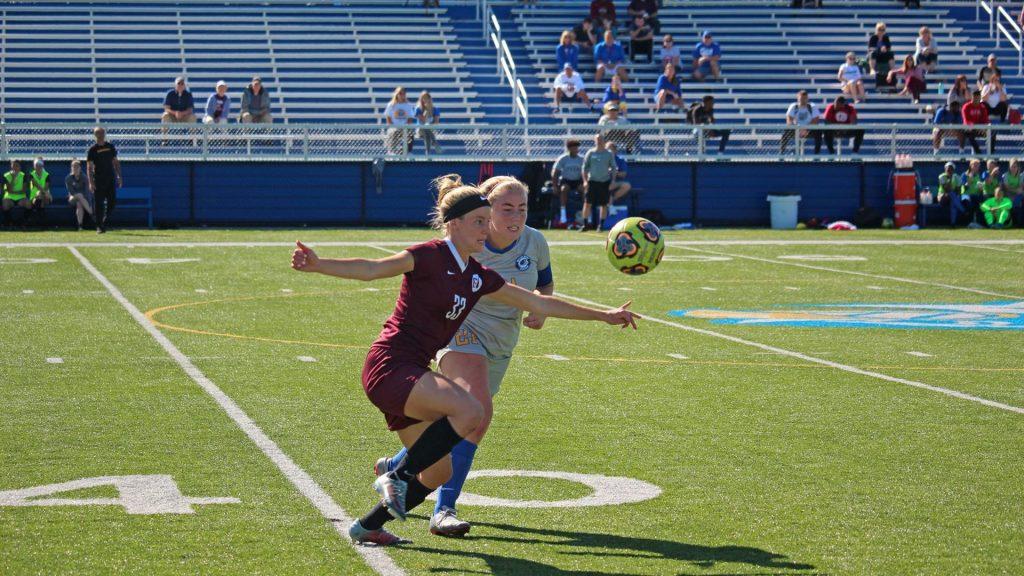 The Gannon University women’s soccer team started its season with a 1-0 win at Notre Dame College Thursday, and the Knights will look to make it two in a row when they host Pitt-Johnstown at 3 p.m. Wednesday at McConnell Family Stadium.
The only score in Thursday’s season-opening win occurred in the second half, when Gannon finally broke Notre Dame’s defense.
Kayla Bevacqua started the game with a pair of shots that merely missed the goal. Her shots were the only shots on goal in the first 37 minutes of the game for both teams.
Notre Dame had the disadvantage in possession time and almost gave up a goal at the end of the first half.
In the 38th minute, Gannon’s Maddie North passed to Emily Cekella, who was in the middle of the box, but Notre Dame keeper Kyra McDowell blocked the shot.
Early in the second half, Gannon’s Megan McCartney won a battle for the ball and buried her strike for the first goal of the season, and the second game-winning goal of her career.
Cekella almost doubled the lead 10 minutes later; however, the shot found the hands of keeper McDowell.
Notre Dame got its first shot of the game on the next possession. Knights goalkeeper Kennedy Solymosi was pulled 20 yards out of the goal to snag the shot, keeping Gannon’s lead at 1-0.
A few offside calls put the Falcons at a disadvantage, but they were not going down without a fight. In the final 90 seconds of the game, Notre Dame gave Gannon a run for its money.
A wide shot gave the hosts a chance with a corner, as the shot bounced around the box without anyone getting their foot on it. A deflection bounced off the post to Notre Dame’s Kady Cushing, who had a shot on a wide-open net.
The chance of tying the game was at its peak with only seconds left in the game. Brigid Casey saved the day, blocking the shot on the line to preserve Gannon’s win.
This victory adds to a remarkable run for the Knights, who haven’t lost a season opener since 2007. Gannon is now 11-0-1 in its last 12 starts, including three consecutive shutouts.
Solymosi was able to shut down the Falcons for the second shutout of her career. Last season, she had a 110-minute scoreless game against Seton Hill, which resulted in a draw.
Following Wednesday’s Pennsylvania State Athletic Conference opener against Pitt-Johnstown, the Knights will travel to Greensburg to meet Seton Hill at 2:30 p.m. Saturday.
Gannon owns a 6-1 edge in the all-time series with Pitt-Johnstown.
The Knights return to Erie to visit rival Mercyhurst at 7:30 p.m. Wednesday, Sept. 18.