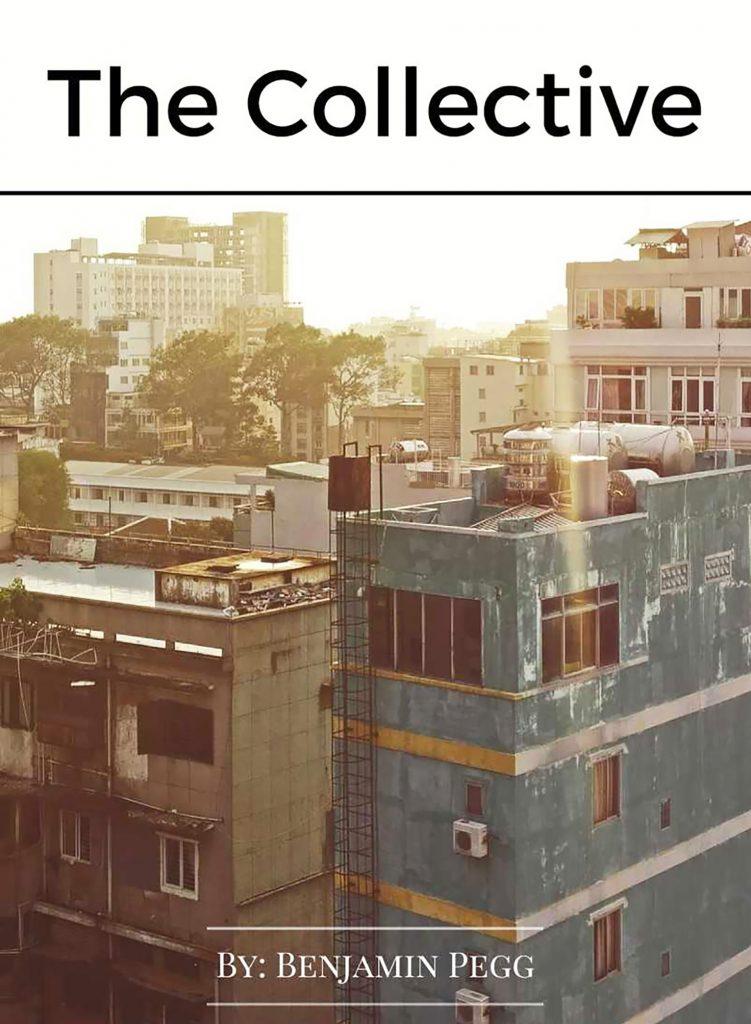 A student at Gannon University is in the final stages of completing his first novel, “The Collective.”
Ben Pegg, a senior mechanical engineering major, has been working on the book for over four years. He said that while he’s always enjoyed writing to some extent, it was contributing to his high school’s literary magazine that motivated him to take it a little more seriously.
Soon after publishing a piece of humorous prose about a man who is always late to everything because he never gets around to buying an alarm clock and a piece of poetry about the relationship between man and nature, Pegg participated in National Novel Writing Month in November of his senior year and began writing his dystopian novel.
Pegg said the initial inspiration for the subject of the novel came to him after thinking about current events and how, many times in society, things that are blatantly wrong sometimes go unchallenged because of people’s unwillingness to break the status quo. He wanted to explore the possibilities of the extreme consequences this might have and why it is so difficult to stand up for what is right in these situations.
He also cited books from the dystopian fiction genre he had read prior to coming up with the plot’s initial concept, most notably those from “The Hunger Games” and “Divergent” series. However, unlike the heroines of those stories, Pegg wanted to focus his novel on characters that had no special traits or any easy way of escaping the oppressive society they were a part of.
“The Collective” focuses on Alex Ryang, a young man who lives in a city-state called The Compound. After many years of violence on both a national and global scale, a group of leaders took advantage of a war-torn United States and founded The Authority, which governs The Compound’s eight urban-like quadrants and some of its outlying areas.
Based on a citizen’s skills, the working class is divided into collectives that provide them a job they’d be the most productive at in order to optimize the economy. Having recently turned 18, Ryang has just been assessed and placed in the electrical collective and given a job at a hydroelectric dam. There, while most of his co-workers appear content, he has experiences that make him question the government and his place in society. Eventually, he is coerced into joining the Insurgency, a rebel group that wishes to restore democracy and a free society, and commits to their cause.
Pegg said that once the initial rough draft was completed in December of his sophomore year at Gannon, he began to entertain the idea of having it published after putting so much time into it. He knew that the first step would be to have the story edited for plot holes and grammar by beta readers, so he reached out to members of a few amateur writer groups he was a part of on Facebook. He participated in an editing exchange with two members, critiquing their work as they critiqued his.
“It’s been great,” Pegg said. “It kind of stings because they’re basically ripping your work to shreds, saying ‘Hey, look, here’s all the stuff [that is] wrong,’ but it really is helpful because when I’m writing something and then re-reading my own work a half-dozen times, I get to the point where I don’t see any problems.”
After the first round of edits, he spent six months restructuring the storyline so that “The Collective” would be the first novel in a trilogy, realizing there was simply too much information he wished to include to fit into one novel.
Now that he is currently on his third draft, Pegg is looking further into the methods of publication he could use. While he could go through a traditional publishing company like Harper Collins, he said that the process would be time-consuming and may not be worth the extra exposure he would get by publishing commercially.
Instead, he is leaning toward publishing through a smaller independent company like Ingram Spark. Although self-publishing would require that he pays out-of-pocket for things like the book’s formatting and ISBN number, Pegg said that the advantage of easily publishing both physically and electronically as well as avoiding requests for edits to the plot from a major publisher are what appeal to him.
Pegg said that if he decides to go that route, he hopes to have the book published by the end of the year. Readers who are interested in learning more about the book and keeping up with its progress can check out Pegg’s website at www.authorbenjamindpegg.wixsite.com/website.
After spending a lot of downtime working on the book throughout his college career, Pegg reflected on the contrasts between his field of study and his love for writing.
“I know there is some creativity in engineering, like doing design and stuff, but there is still a lot of ‘You have to do this,’ or, ‘You can’t do that,’ because people can get hurt when things go wrong,” Pegg said. “With my writing, it can have terrible grammar or a really stupid plot and it doesn’t matter because I wrote it and that’s really the only thing that’s important about it.
“I also like that I can still use the analytical side of [engineering] because I try to keep things as realistic as I can, so I do a lot of research into the setting and the demographics.”
As someone who has had a couple years’ worth of experience at this point, he also had advice for young writers who wish to publish their own work someday.
“Make something that you want people to read and something that you can be proud of — don’t just publish something because you want to publish something,” Pegg said. “There are also people who will say that you’ll never make any money writing, but if you’re just writing to make money, you’re doing it for the wrong reason.
“Do it because you like doing it.”