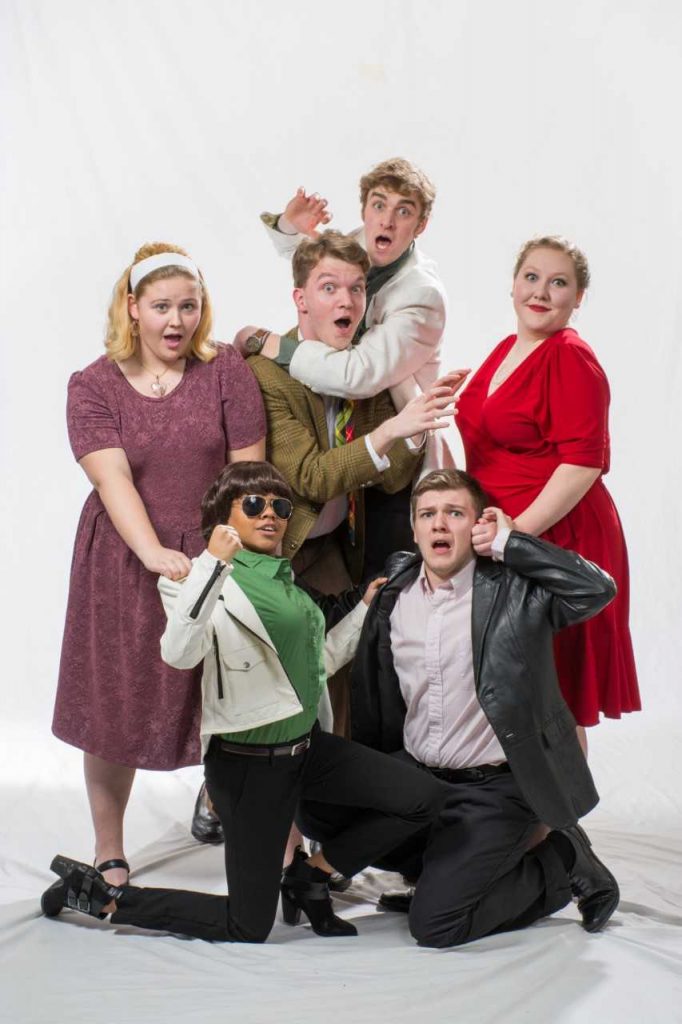 Travel back to 1963 England, where the English accents are thick, the fashion is wild and Francis Henshall is living two lives.
Gannon University’s Schuster Theatre is concluding its season with “One Man, Two Guvnors,” a farce based in ‘60s England that includes very stereotypical character types and improbable situations.
Written by Richard Bean, the comedy received five-star reviews from every London newspaper and was the hit of the 2012 Broadway season.
This show is a first time main stage performance for most of the cast, including freshman journalism communication major Amy Benkovich.
“I had heard of the show before and thought it was hilarious, so I wanted to be involved,” Benkovich said.
“My granddad’s accent has that southern England cockney slang, making me feel a lot more confident performing on stage.”
Francis Henshall is employed by small-time gangster Roscoe Crabbe and high-class Stanley Stubbers.
Unknowing to Francis, Roscoe is really Rachel Crabbe, posing as her dead brother who was killed by Stanley.
That, however, didn’t end her deep love for Stanley.
In the mix of confusion, Francis goes out of his way to serve both bosses but is distracted by the lovely and intelligent Dolly, a bookkeeper for Charlie and Pauline.
Pauline was originally betrothed to Roscoe, but upon his death her father, Charlie, arranged for her to marry an over-the-top actor, Alan Dangle.
Take a deep breath, and read that description over again to make sure you fully understand the crazy connections between each character.
“One Man, Two Guvnors” is the first farce the Schuster Theatre has brought to the stage in the past two seasons.
Molly Cooke, the stage manager and a junior theater communictions major, said that despite the confusion, “One Man, Two Guvnors” is a ridiculously funny British show.
“It’s been very enjoyable to watch actors over exaggerate everything,” said Cooke, “whereas the Schuster Theatre usually focuses on realism making for a more calmer production.”
“One Man Two Guvnors” opens Thursday, April 19, with the Patron of the Arts reception at 6 p.m. with free food and cast members meet-and-greet.
The production will be performed at 8 p.m. April 19-21 and again April 26-28 with one additional 2 p.m. performance on Sunday, April 29.