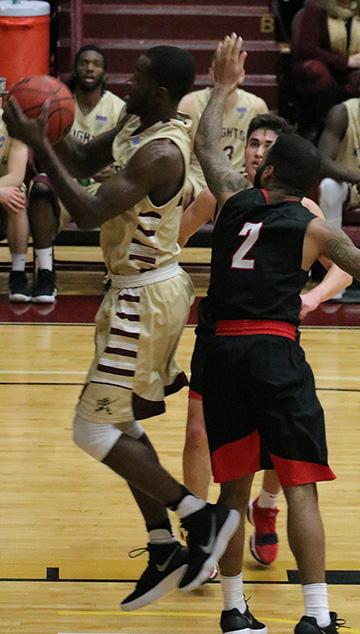 The Gannon University men’s basketball team will get a shot at the big prize, as the Knights secured a bid to the NCAA Division II Atlantic Regional Tournament, and will face East Stroudsburg Saturday at 2:30 p.m. at Virginia State University.
Gannon, the regional’s No. 7 seed, will take on second-seeded East Stroudsburg in a rematch of Sunday’s Pennsylvania State Athletic Conference Tournament championship game, which the host Warriors won by an 89-67 count.
This will mark the 25th appearance in the NCAA Division II Tournament for Gannon but the first since 2015 for coach John T. Reilly’s team. The Knights have reached the Division II Elite Eight five times.
The tipoff time for Saturday’s game against East Stroudsburg had not been set as of press time.
The Knights, who will take a 22-9 record into Saturday’s regional tournament, reached the PSAC finals by defeating Slippery Rock, 77-70, and Shippensburg, 81-70, on Wednesday and Saturday, respectively.
In Sunday’s tournament championship game, Gannon saw victory slip away as East Stroudsburg went on a 23-9 run in the final eight minutes.
The Warriors also came out strong early, building a 12-2 lead in the first four minutes and widening that margin to 34-16 with three minutes to play in the half. East Stroudsburg used a 14-2 run to help boost its lead.
Ending the half with a buzzer-beater layup, the Warriors went into the locker room up 43-23, and the Knights were unable to bring the deficit closer than 15 points during the second half.
Jair Green led Gannon in scoring for the second consecutive game and 10th time this season with 25 points. Evan Phoenix achieved his 11th double-double of the season with 13 points and 14 rebounds. Zay Jackson was the last double-digit scorer with 13 points and four rebounds.
Green also totaled 25 points — a career high — in Saturday’s tournament semifinal win over Shippensburg. Gannon showed its strength on the boards, outrebounding the Raiders, 47-30.
Neither team could assume control in the first eight minutes with eight lead changes and six ties. Gannon found its first significant lead with eight minutes remaining after Frank Webb Jr.’s layup and two free throws by Green put the Knights up, 21-16.
The Raiders regained the lead after scoring six consecutive points with 66 seconds left to play in the half. Gannon took a five-point lead in the last minute as Phoenix sparked the run with a dunk followed by a three-pointer and two free throws from Green.
Opening the second half with a 38-34 lead, Gannon had five different players score to create a 12-0 run. Webb Jr. and Jackson scored back-to-back three-pointers to end the run and give the Knights a 50-38 lead.
Gannon maintained a seven-to 12-point buffer against the Raiders for the remainder of the game.
In addition to Green’s 25, Phoenix scored 16 points, Jackson chipped in with 14 and Webb Jr. finished with 12 for Gannon, which enjoyed a 47-30 edge on the boards.
After beating Slippery Rock to close the regular season, the two teams had a rematch in the quarterfinals of the PSAC Tournament at the Hammermill Center.
The opening seven minutes saw five ties and four lead changes as the two teams traded punches. Down 11-9, the Knights sparked a 10-0 run to gain control and put themselves up 19-11 with 12 minutes remaining.
Toward the end of the half the Rock narrowed the gap to eight at 29-21 until freshman Cyril Ogbuagu found a layup in traffic at the buzzer.
Slippery Rock came out on fire at the start of the second half, going on a 10-2 run during the first three minutes. Gannon countered with two points each from Jackson, Webb Jr. and Phoenix to bring the score to 45-35.
The Rock hit five consecutive three-pointers in the final minutes to bring them within four points with 30 seconds left to play. But Gannon went 15-for-16 at the free-throw line in the final two minutes to fend off the Rock’s rally and claim a 77-70 victory.
Jackson led four players in double figures with 20 points while Phoenix contributed 17, Webb Jr. added 14 and Damon Miraud totaled 10 to go with a game-high 15 rebounds.
As it did in the final regular-season game, Gannon outrebounded what had been the nation’s No. 2 rebounding team, 42-34. The Knights also took care of the ball, committing just nine turnovers to Slippery Rock’s 17.
Miraud was named the PSAC Western Division Defensive Player of the Year and second-team All-PSAC while Jackson was named first-team All-PSAC.