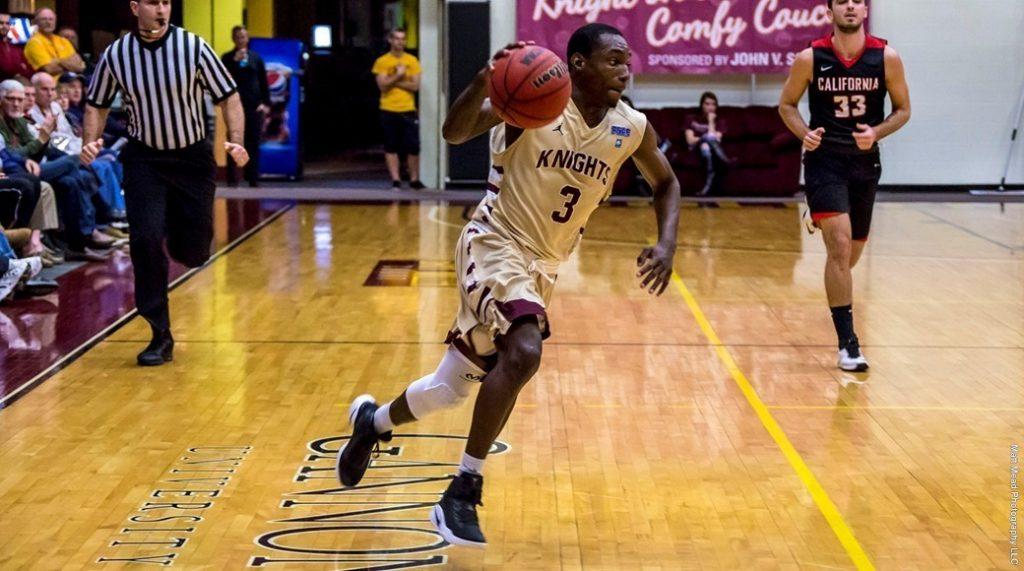 The Gannon University men’s basketball team kicked off its season over the weekend by splitting a pair of games in the Clarion Hotel Conference Challenge, hosted by Shepherd University, in Shepherdstown, W. Va.
The Knights lost to Wheeling Jesuit University, 81-74, in overtime Friday and then came back and defeated Shepherd University the next day, 79-69.
The Cardinals of Wheeling Jesuit and the Knights were neck-and-neck for the majority of Friday’s game. It came down to the final seconds as Gannon trailed 66-64 that senior Zay Jackson was fouled attempting a three-pointer.
Jackson went to the line and with one second left in regulation missed the first free throw, but rebounded to sink the next two and send the game into overtime.
Minutes into OT, the two teams exchanged free throws to tie it up for the ninth time in the evening. However, WJU made four more to put the game at 70-67 and held a lead the whole time en route to the win.
Jackson acknowledged that he had a chance to close things out at the free-throw line against Wheeling Jesuit, but thought the game gave Gannon a chance to display its character.
“It’s all right though because it showed that we could fight back,” he said. “It’s early in the season and we’ve got a couple new guys and they showed that they could come in and do some things.
“It’s a learning lesson but we also got some great things out of that game.”
Jackson led the Knights with 23 points while Evan Phoenix added 19 and Jair Green contributed 17. Phoenix paced all rebounders with nine.
The Knights bounced back with a win the next day over host Shepherd.
After multiple lead changes and ties, Jackson’s three-pointer with 45 seconds left in the half gave Gannon a 35-34 lead, and Green’s two free throws enabled the Knights to trot into the locker room with a 37-34 lead.
Unlike the first half, it was clear who had the upper hand in the second half as Gannon ripped off 12 consecutive points with a 41-38 lead.
Another three from Jackson got the ball rolling. Senior Damon Miraud added a nice and-one and Phoenix, the junior big man, Jackson and senior Gerrell Williams all joined in the fun with field goals of their own.
Gannon held Shepherd scoreless for the 3-minute, 28-second scoring parade and that gave Gannon a 53-38 edge with just under 16 minutes left to play in the half.
Shepherd was able to put up 10 more points, but it was not enough as Gannon had its biggest lead of the game at 66-48 with a three-pointer from Green.
The Knights held a double-digit lead the rest of the way and sailed to their first win of the 2017-2018 season.
Jackson once again led Gannon in scoring with 21 while Green checked in with 18 and Phoenix added 16 points and 10 rebounds.
Jackson said he thinks the season going forward will be positive for the team and sees nothing but improvement with each practice. He also said he thinks things will come together once the team comes closer as a squad.
“It [the chemistry] is there, but it’s a long season and we still have a long way to go,” Jackson said. “We’ve got a pretty good group of guys, and we all love playing and we all love playing with each other.”
The Knights waste no time getting into Pennsylvania State Athletic Conference (PSAC) action as they host West Chester and Cheney Saturday and Sunday, respectively, at the Hammermill Center. Tipoff for both games is at 3 p.m.