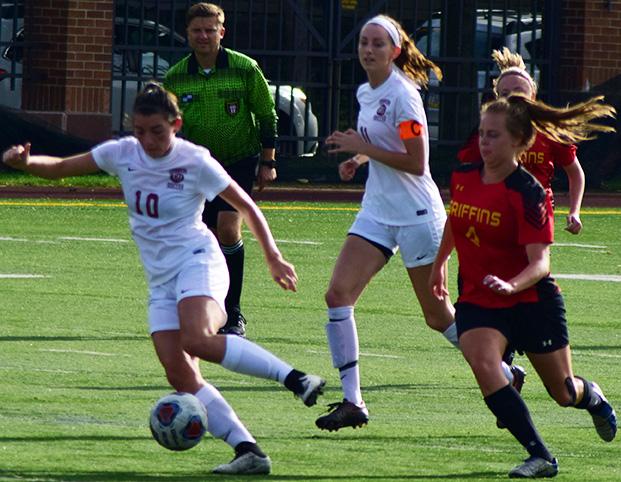 The Gannon University women’s soccer team fell short in the opening round of NCAA Division II tournament play, losing 2-0 to 14th-ranked West Virginia Wesleyan College Friday at East Stroudsburg.
The Atlantic Regional tournament loss ended the Knights’ season with a 13-5-2 record. West Virginia Wesleyan improved to 18-2-1 with the win, but the Bobcats fell in an overtime shootout the following day to host East Stroudsburg in the regional finals.
Gannon enjoyed a large advantage in shots, 16-7, and corner kicks, 6-1, against West Virginia Wesleyan, but the Knights were unable to rebound from the Bobcats’ offensive pursuit.
Taylor Lewis and Emily Cekella kicked off the match for the Knights with two shots in the 15th minute. The shots were blocked by Bobcat goaltender Ashlee Schumacher.
The Bobcats took their first shot in the 21st minute with a ringer off the post by Natalie Prater. Prater returned three minutes later to score the match’s first goal.
West Virginia Wesleyan continued to attack at 29 and 33 minutes with two shots on goal saved by senior Danitza Indacochea. Trailing at halftime, 1-0, the Knights remained competitive on offense with five shots.
Gannon fired two shots wide in the opening nine minutes of the second half, but the Bobcats fired back with a goal in the 56th minute. Kelsie Hibbs scored the goal off a midfield pass from Carolyn Saulle.
The Knights had a chance to come back just three minutes after the Bobcats’ second goal, but West Virginia Wesleyan goalkeeper Chelsea Hubner — who had come on in the second half — blocked a Gannon penalty kick.
Despite outshooting the Bobcats 9-0 after the second goal, the Knights were unable to get the ball past Hubner, who recorded four saves in the half.
The Knights had an impressive 11-2 edge on shots during the second half.
Gannon senior Hannah Manczka led the team in shots with six while Lewis took four.
Gannon entered the match ranked No.6 in the NCAA Atlantic Region while Wesleyan stood at No. 3.
This was the Knights’ second appearance in the NCAA tournament in the last three years.
Gannon concluded its season with several noteworthy individual accomplishments. Manczka finished her career No. 7 all-time in assists with 12, and 25th in points with 26.
Lewis finished the season with 36 points, the fourth-highest single-season point total in school history, and her 14 goals this year puts her fifth in the all-time single-season goals mark. Her eight assists this season also stands as the fifth-highest mark in school history for a season.
Indacochea ends her Gannon career ranked third all-time in shutouts at seven, fifth in goals against average with 95 percent and 17th in saves at 76. She is also seventh all-time in goalkeeper victories with 16.