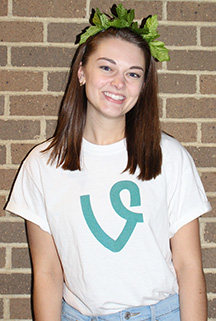 My taste in music has always been a little whack.
I got a lot of guff in high school for having a “weird” taste in music — aka anything that wasn’t country or played on Star 104.
But my time spent at Gannon has taught me that my taste in music still isn’t good enough and that I’m actually too basic for real music critics.
The stuff I listen to isn’t mainstream enough to be accepted by basic people but isn’t indie enough to be accepted by the misfits, so basically I’m stuck in the middle and no one understands my music preferences.
That’s not entirely true because I actually am fortunate enough to have a small group of friends who share my tastes and travel to concerts with me.
But for the most part, most of my friends usually avoid handing me the aux cord because they know that what I play will have them wanting to crash into a wall or drive off a bridge.
A vast majority of my music is what most people would consider depressing, melancholy, emo, etc., but I actually like a very diverse range of genres like indie rock, alternative, pop punk, R&B, rap, some top 40 songs and even ‘80s pop.
I’ve got everything from Prince to Drake on vinyl and I have an extensively organized online music library for all my tastes and moods of music.
I definitely got my taste in ‘80s music from my parents. I’ve listened to my fair share of Pat Benatar and Journey in car rides throughout my lifetime and every time the family is in the car together we listen to Sirius XM’s ‘80s on 8 because it’s the only thing we can agree on.
I think I acquired my emo and punk tastes from my friends during my angsty junior high years, and I can remember spending numerous slumber party evenings discussing Fall Out Boy, Panic! at the Disco and My Chemical Romance.
I became more interested in rap music during high school because that was what was considered “cool” to listen to, but I’m glad I exposed myself to the genre because I sincerely like a lot of rap artists like Childish Gambino, A$AP Rocky and of course Chance the Rapper.
Although I like all these genres, I know that nothing tops the sad melancholy tunes that I always turn to.
My favorite subgenre would be something called sadcore, which the ever reliably and accurate Wikipedia defines as, “a type of alternative rock characterized by bleak lyrics, downbeat melodies and slower tempos.”
I realize this isn’t everyone’s cup of tea, but for me, I love this stuff.
Nothing is more relaxing or relatable than listening to Lana Del Rey, Melanie Martinez, Lorde, Banks and more sing about their depressingly troubled love lives.
My particular musical niche is female sadcore because no one makes more powerful music than sad, angry, powerful women.
There’s something so beautiful about connecting to a female artist who is going through something that you can relate to and having the lyrics and melody parallel things you can’t express in words yourself.
Some people don’t understand the concept of listening to sad music when you’re already sad, but for me it’s definitely something that helps because it lets me know that I’m not alone. Someone somewhere at some point in time was feeling the same thing I’m feeling, and the lyrics we share are enough to let me know that everything is OK.
Music keeps me going. I think it keeps us all going — and it doesn’t really matter what genre of music you like, as long as it keeps you doing just that.