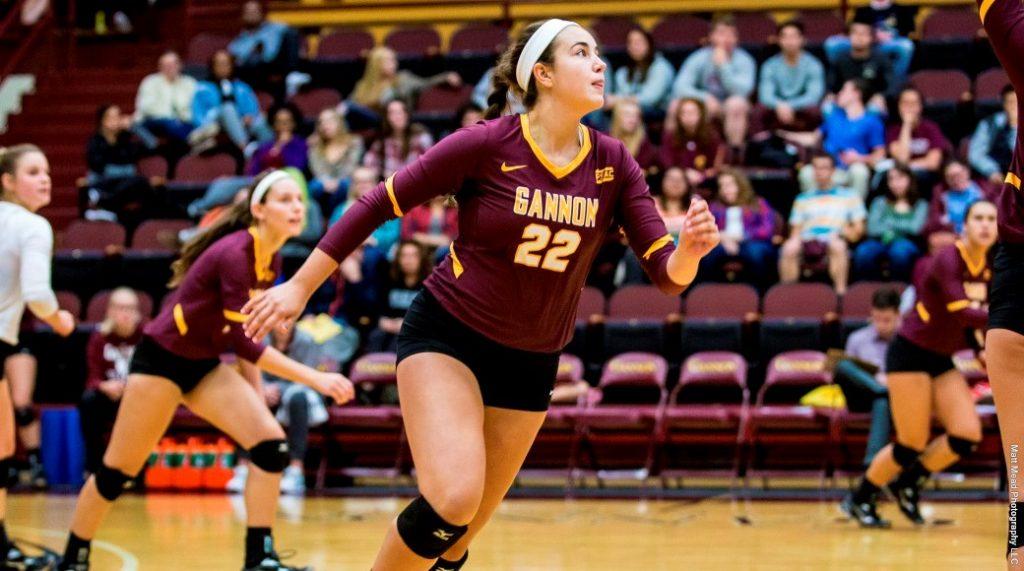 The Gannon University volleyball team split a pair of matches against Pennsylvania State Athletic Conference opponents last week, falling to Shippensburg in five sets before resuming its usual winning ways against Millersville.
On Friday, the Knights looked to be in good shape against Shippensburg, taking the first two sets, 25-23 and 25-22, but the Raiders stormed back to win the last three straight, 25-22, 25-23 and 18-16.
Gannon bounced back against Millersville the next day despite some early difficulty, defeating the Marauders in straight sets, 28-26, 25-23 and 25-15.
In the match with Shippensburg, the Raiders took an early 8-5 lead in the first set before Gannon rallied for the win. The Knights led 13-7 early in the second set before Shippensburg rallied to get within four at 23-13, but the Knights put the set away at 25-22 on an Ashley Kerestes kill.
Gannon used a 7-0 run to help stay close in the third set before falling, and the Knights were up 14-10 in the fourth set, thanks in part to back-to-back-to-back kills by Kerestes. But Shippensburg would outscore Gannon 15-9 in the back-half of the set to win the set 25-23.
The rubber match of a fifth set went to the Raiders in a dogfight. Gannon would tally three straight points to tie the set at 9-9, but the Raiders clinched the set with a service ace, 18-16.
Gannon coach Matt Darling said it is important for the team to bounce back from a loss and find a way to win. Darling said the Knights hoped to start well in conference play “and that didn’t happen, clearly, as we are very fortunate that we won even one match this weekend.”
“However, the matches at the beginning of the season are less important to me than those that come later,” Darling added. “We’ll see how we respond.”
Ally Smith led the Knights with a double-double, collecting 14 kills and 19 digs. Kerestes posted a career-high 11 kills, and Sara Crandall led the Knights with 28 digs.
The next day was a much different story as Gannon clawed its way to its first PSAC victory of the season by blanking Millersville.
The Knights found themselves in a hole early as Millersville led off the first set with eight straight points. Maggie Wilhelm issued the first kill for Gannon and sparked a comeback that saw the Knights score nine of 13 points to pull within 15-11.
A Millersville timeout spurred three straight points to get the lead back to 18-11, but the Knights would eventually take a 21-20 lead after Ally and Rebekah Smith killed back-to-back volleys to spark an eight-point rally. Gannon would eventually take the set 28-26.
Millersville once again came out firing in set two, taking a 6-0 lead before a Gannon timeout. The Knights wouldn’t get even until they were knotted at 21-21 with a Lexi Johnson kill. Kelsey Ansec and Rebekah Smith delivered kills to take the set, 25-23.
Gannon, looking like a new team, handled the final set with ease thanks to a seven-of-eight point run to take the set, 25-15. Ally Smith led Gannon with her fourth — and third-straight — double-double of the season. Carolyn Knollman led Gannon in both digs (17) and assists (36).
Darling applauded the play of Knollman. “She is learning how to deal with increased pressure,” he said of the junior, “and I’m looking forward to helping her with that.”
Gannon improved to 11-3 (1-1 PSAC) on the season and will return to battle Pitt-Johnstown at 7 p.m. Friday at the Hammermill Center. The last time the Mountain Cats and Knights met was in last year’s PSAC championship, which Gannon won, 3-0.
“Pitt-Johnstown is the best team in the league, so our match Friday should give local fans a chance to see the best talent in the PSAC,” Darling said. “I hope people come to watch.”
The Knights also will host Lock Haven at 2 p.m. Saturday.