Football comes up short in search of second win 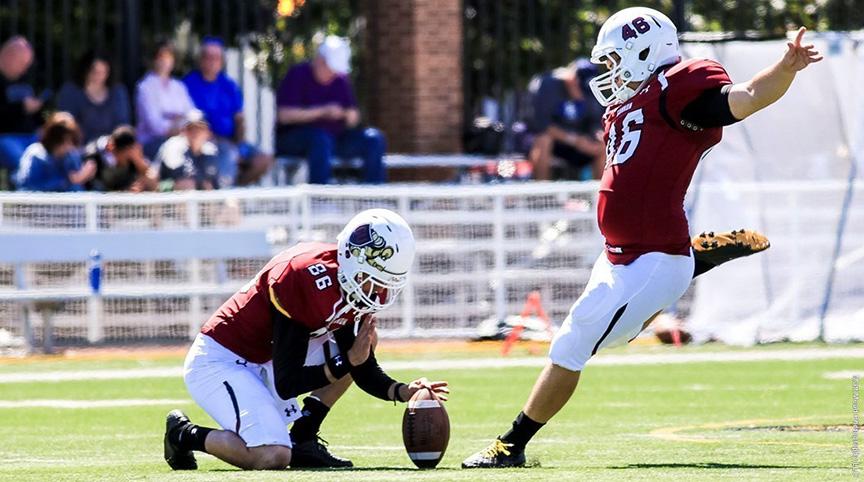 The Gannon University football team was looking to claim its second win of the season over Bloomsburg Saturday, but the Knights came up on the short end of a 27-10 decision at Redman Stadium in Bloomsburg.
The loss dropped the Knights to 1-2 heading into their PSAC Western Division opener at noon Saturday against Slippery Rock at McConnell Family Stadium.
Bloomsburg came into last week’s action with a very high-powered offense that stayed active throughout the game, outgaining Gannon 334-321.
Still, the Knights had their share of bright spots, not the least of whom was redshirt junior running back Marc Jones, who posted a career-high rushing output of 173 yards, including Gannon’s lone touchdown on a 6-yard run late in the third quarter.
Jones also caught two passes for 13 yards.
Jones has rushed for more than 100 yards in the Knights’ first three games, becoming only the third player in school history to start a campaign with three straight 100-yard rushing games.
Jones has already surpassed his statistics for the 2016 season and is currently leading the PSAC in rushing yards with 524 yards.
Kicker Karch Holland also deserves an honorable mention as he took over second place on Gannon’s all-time leading scorer list.
Holland had an extra-point conversion as well a 30-yard field goal that cleared the uprights with ease.
The senior already has a hold of the first-place spot on Gannon’s extra points made list at 119 and is second in field goals made with 27 in his career.
The Knights started off slow against Bloomsburg and did not score until midway through the second quarter on Holland’s field goal.
That capped an eight-play, 59-yard drive that was sparked by a 47-yard pass completion from Jimmy Keefe to Tyler Palka.
Holland’s field goal cut the margin to 10-3, and the Knights’ defense held on the ensuing possession, forcing a punt.
Gannon moved into Bloomsburg territory on a 30-yard run by Jones, but on the very next play, Bloomsburg’s Chris Gary returned a fumble 55 yards for a touchdown to boost the Huskies’ lead to 17-3 with 5 minutes, 10 seconds remaining in the first half.
A lot of pressure was placed on Keefe, the redshirt freshman who was making his first career start in place of junior Zach Phillips, who missed the game due to injury.
Keefe finished the game by completing 15 of 27 passes for 169 yards and two interceptions. He also was sacked five times.
Palka was his top receiver with six catches for 90 yards.
Gannon’s defense stayed strong in its battle with Bloomsburg.
Linebackers Geremy Paige and James Simms each recorded seven tackles.
The Knights will have their hands full Saturday with Slippery Rock, which comes in 3-0 and has been featured twice on ESPN’s SportsCenter for spectacular plays.