SAVE hosts Take Back the Night to recognize sexual assault 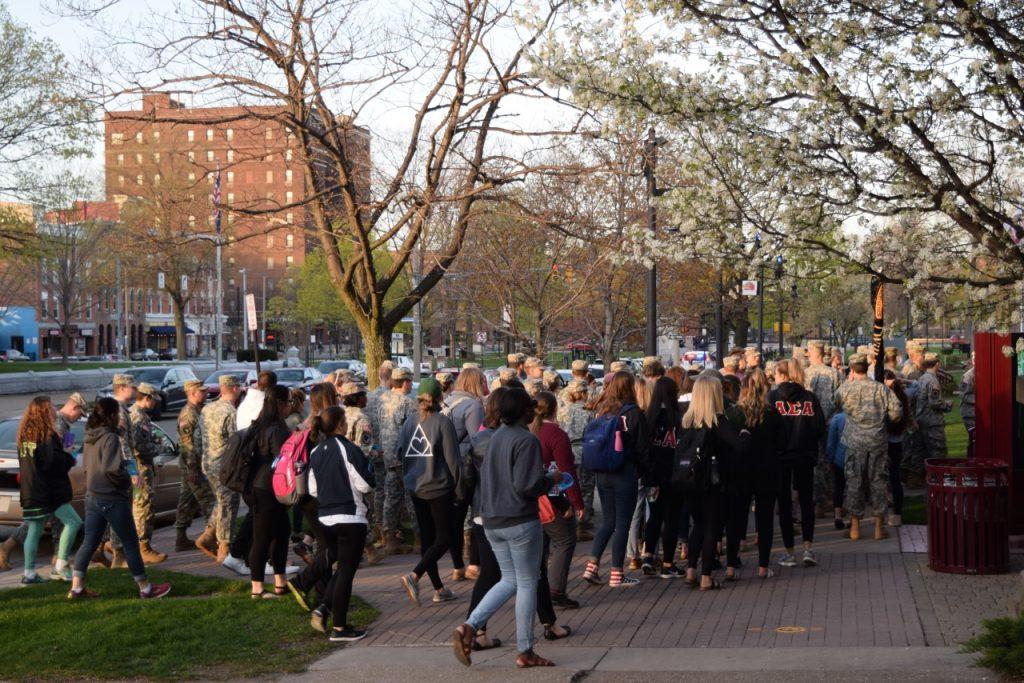 About 11 percent of all college students experience rape or sexual assault through physical force, violence or incapacitation, totaling over 2 million victims each year.
To raise awareness of this issue, Students Against Violence Everywhere (SAVE) hosted an event called Take Back the Night Monday evening.
Katie Allison, Gannon University’s assistant director of sexual assault and violence education, said SAVE is a campus organization that uses the positive power of peer influence to promote respect and civility at Gannon and in their personal lives.
“It is a group of students representing all members of the student body who care about the personal safety of the students and all members of the Gannon community,” Allison said.
Violence of any kind does not just affect one gender. Although women are more commonly sexually victimized, men too are affected by this. Approximately 1 in 5 men experience some form of sexual violence in their lifetime in the U.S. and about 1 in 4 college women are victimized.
Kat Unger, a student SAVE member, was one of many who were affected by a form of sexual abuse. She was not personally assaulted; however, her brother and few close friends, who attended Gannon, were.
Unger said she joined SAVE because she was looking for an organization that really reached out to the community about pertinent topics in society, such as violence everywhere – domestic violence, sexual assault and cyber bullying.
“This is a topic in society that people try to be hush-hush about, but that needs spoken about and prevented,” Unger said.
Around 7 p.m., a large crowd of community members and students met at Perry Square and marched through the city. During the march, the group of supporters made a few stops as a speaker stepped forward to talk to the group.
When the group made its way back to campus, they headed up to the Yehl Ballroom, which was decorated with several T-shirts.
These plain white shirts were decorated by students to support those affected by sexual abuse during SAVE’s Clothesline Project. SAVE also offered blank shirts and markers so that community members could add their inspirational words to the decor.
Once the group made it to the ballroom, the lights were dimmed and the room was lit with nearly one hundred lanterns, which were made using purple and green plastic cups with artificial candles.
This signaled the beginning of the second part of the event – the Speak Out and candlelight vigil.
The group formed a circle in the middle of the quiet, darkened ballroom. After about five minutes, the silence was broken. Several people gained the courage to share why they attended the event and how this issue has personally affected them.
Katie Walters, the president of SAVE, said she loved the Clothesline Project and Take Back the Night because of the opportunity that is given to the university to become part of SAVE’s mission.
“I think the personal invitation into our heart’s work is the key to others empowering students,” Walters said.
Walters said several community partners participated in the event including Gannon’s ROTC, Mercyhurst University, the Woman’s Caring Place, Safe Net and Crime Victims Center.
Allison said that as a confidential reporter, she is able to assist students who are seeking resources and advice around issues related to sexual trauma, relationship abuse or stalking.
“I will help to connect them with the appropriate campus or community resource,” she said. Allison can be contacted at [email protected]