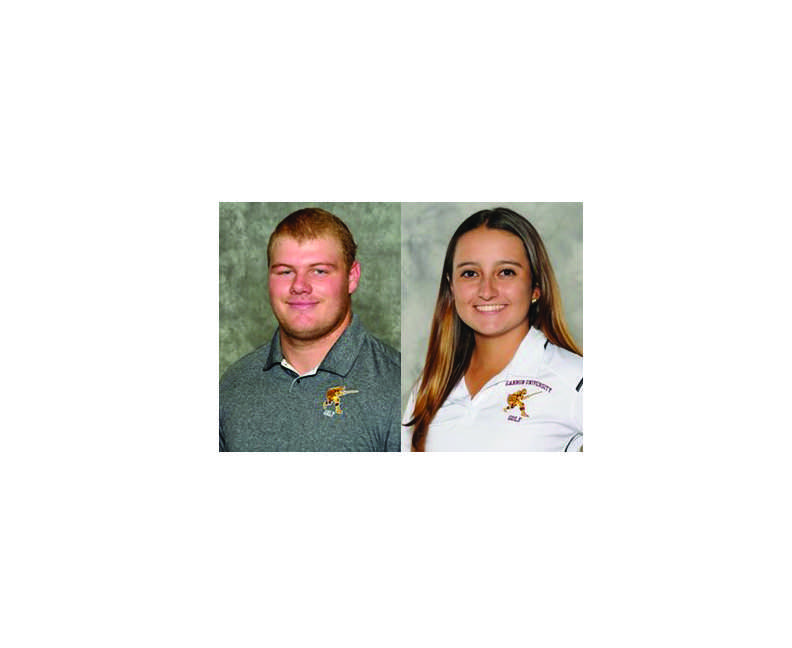 Sergio Garcia might have won the Masters but step aside Mr. Garcia — there are two new sheriffs in town: Manuela Quevedo and Daegan Wall.
Over the weekend Gannon University’s men’s and women’s golf teams competed in a couple invitationals. The women’s team placed first among six teams at the Mercyhurst Invitational, with junior Quevedo capturing the top spot.
The men fought in the Maroon and Gold Invitational, or as it is formally dubbed the Gannon Spring Invitational. As a unit the lads tied for third out of eight but Wall came out of the wickets and was crowned the individual victor.
*Insert golf clap here*
Now let’s send it down to Brandon at the women’s tees.
Thanks Brendan. I’m here with Manuela Quevedo of Gannon, who just captured her third title of the season after shooting a 76 at the Mercyhurst Invitational. Along with this invitational, she has also won the LeMoyne Invitational and the Battle at the Bay Tournament in Rising Sun, Md.
“It felt great to be able to play one of the best golf rounds of my life, especially when we knew that we had to play well to be able to qualify for regionals,” Quevedo said. “I was nervous at the beginning of my round and I think that’s why I had a rough start. However, on the back nine I was able to relax and have five birdies in a row, which is something that I have never done before.
“I think I didn’t realize it was my third title as an individual because I was more focused on winning as a team and lowering our scoring average to qualify for regionals.”
One stroke behind Quevedo was senior Diana Munoz, who shot a 77, and sophomore Rebecca Red Horse placed sixth with an 85. The Gannon “B” team also competed and freshman Ilena Calderon came in seventh with a score of 86.
After that both teams headed to the Gannon Spring Invitational at Lake Shore Country Club in Erie, where they took second out of six teams.
Quevedo took second individually with a two-day score of 150 behind California University of Pennsylvania senior Carla Maestre, who won the event with a 147.
On the B team, freshman Samantha Gaffney led the way by taking eighth place with a score of 162.
That concluded the regular season for the Knights and they will now head into postseason action in Canton, Ohio, for the NCAA Division II Super East Regional on May 8-10. Back to you, Brendan.
Thanks Brandon. Now we are going to send it over to Brenon at the Gannon Spring Invitational with winner Daegan Wall.
All right — thank you Brendan. I’m here with senior Daegan Wall, who just won his first individual title at none other than Gannon’s Spring Invitational. Daegan, how’s it feel?
“It’s a feeling I never thought would happen; I didn’t expect to win in one of my last two tournaments. Even though I was playing well it is extremely difficult to win in college and I really never thought I would win because of the amount of good players we play against. I couldn’t be more excited to end my career that way.”
Wall finished the tournament Saturday shooting a 72, placing him above the competition and landing him in first place.
The next Knights behind Wall were freshman Jordan Henry and fellow senior Billy Clark, who tied for 18th with a score of 79.
While Gannon didn’t win the tournament, the Knights did tie for third with Roberts Wesleyan and Humber College, each with a score of 311. California University of Pennsylvania took first with a score of 308 and Mercyhurst tied the Vulcans.
After that the men moved on to the Mercyhurst Invitational, where they placed fifth of nine teams to conclude their regular season. Wall placed high again as he was seventh individually out of 51 golfers .
Well, that concludes this week’s edition of Gannon Golf. Up next the women’s team will head into the postseason alongside the men’s team, which will head to Daniels, W. Va., for its NCAA Division II Atlantic/East Regional on May 8-10.
Keep track of the Knights’ progress through postseason on the Gannon athletics website: at www.gannonsports.com.