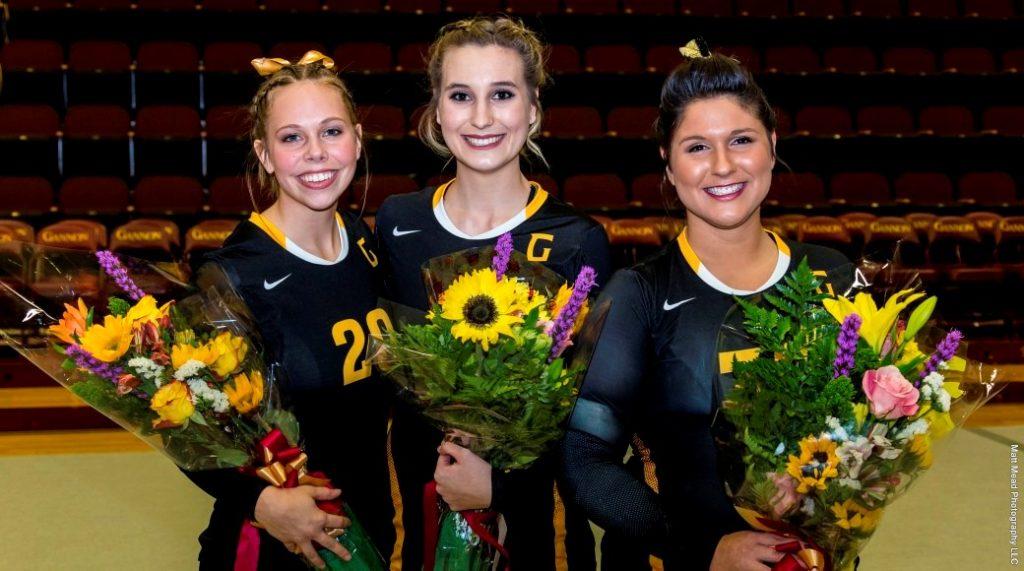 Gannon University’s acrobatics and tumbling team won its first Eastern College Athletic Conference (ECAC) contest Saturday, defeating King University in a nail-biter, 272.765-268.255, on Senior Day at the Hammermill Center.
The Knights, ranked No. 8 in the National Collegiate Acrobatics and Tumbling Association (NCATA) coaches’ poll, improved to 3-1 overall and 1-1 in ECAC action with the victory. King, ranked No. 9, fell to 1-2 overall and 0-2 in the ECAC.
Gannon is one of four founding members of the ECAC acrobatics and tumbling league, which is in its first year of competition, along with Alderson Broaddus (West Virginia), Quinnipiac (Connecticut) and King (Tennessee).
The Knights, who won 10 of 19 heats and three of the six events on the day, recognized three seniors on Senior Day prior to the match in Ciara Rand, Jessica Page and Angelina Grandinetti.
Rand reflected on the emotions she felt. “It was a little surreal standing on the mat and being recognized as a senior,” she said.
In the compulsory event, Gannon’s only heat win was in tumbling, but the difference in that heat (9.20-7.80) was enough to push the team to an overall win, 37.80-36.80.
Although King squeaked out two victories in the next two events, acrobatics and Pyramid, 29.20-29.25 and 29.15-29.25, respectively, Gannon took a narrow 96.15-95.30 lead into halftime.
Gannon fell by yet another slim margin in the Toss event to open the second half, 28.45-29.55, but rebounded well winning the tumbling portion of the match — the final non-team event — 56.525-54.025. The Knights won all six heats.
Rand later touched on the importance of the Tumbling event this season.
“It’s where we shine and have been able to pull ahead of our opponents,” she said.
And they did just that.
In the Tumbling event, Gina Pergolizzi recorded a 9.90 out of 10 possible points in the 6 Element Pass to mark the highest scoring heat of the day.
In the team event, Gannon sealed the win by posting a 91.64 out of a possible 105.84 while King tallied a 90.13 out of a possible 105.23 to put the total score at 272.765-268.255 out of a possible 300 points.
Rand also added memories of her freshman year.
“It’s crazy to look back and remember only having a team of 14 girls,” she said, noting that the team now has 30.
“So much has changed over these four years, and I feel very blessed to be a part of it.”
Up next, Gannon will head to Waco, Texas, on March 26 to battle NCAA Division I Baylor University at 2 p.m.
Rand ended with appreciation for the crowd.
“It feels amazing to have people come support the acro team here at Gannon,” she said.
“Because it is such a new sport, it’s hard for people to fully understand what is going on and how it works, but our team feeds off the energy of the crowd and it really does help all of our performances.”