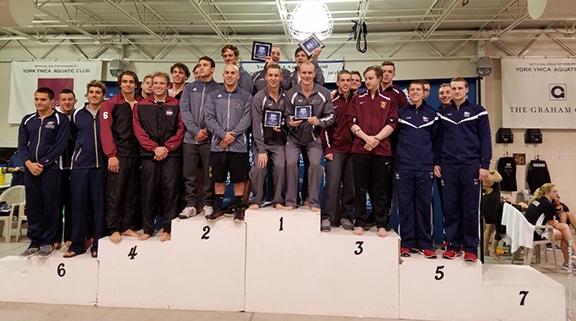 The Gannon University men’s swim team wrapped up its season by finishing fifth among seven schools at this year’s Pennsylvania State Athletic Conference Championships, held at the Graham Aquatic Center in York.
The highlight of the four-day meet, which began Thursday and ended Sunday, was the Knights’ 200-yard freestyle relay contingent’s bronze finish on Friday.
The quartet of Michael Weiser, Allan Collins, Bryce Ebel and Clark Eason clocked a time of 1 minute, 24.91 seconds, good for third place — the Knights’ highest finish of the meet.
Several Gannon individuals finished among the top 10, but only one of them – Maciej Skrzypczak – cracked the top eight in their respective event.
Skrzypczak finished seventh in the 100 backstroke with a time of 1:54.99. He also placed 10th in the 200 back in 1:54.99, one spot behind teammate Collins, who came in at 1:54.13.
Weiser also placed ninth in the 50 freestyle in 21.23 seconds while Thomas Marshall placed ninth in the 500 freestyle.
The Knights entered the season-ending event as one unit. But once in the water they were on their own and tested their hard work for months upon months, seasons upon seasons, of training.
“By far the best part of the sport is accomplishing your goal,” Austin Hancock said.
“Unlike most sports, swimming is primarily an individual action. Yes, teammates pushing and supporting you is key, but when you’re in the water it is all you out there. When all of the early morning training and constant focus pays off, there is truly no greater pleasure.”
Hancock said the conference meet is a major thrill for all competitors.
“When there are multiple teams competing for the same goal it becomes such a rush for everyone, including the spectators,” Hancock said.
Others finishing in the top 10 were Cole Davis, who finished 10th in the 200 butterfly in 1:54.78, while Eric Booth was 10th in the 400 individual medley (4:12.50) and Marshall was 10th in the 1,000 freestyle (9:50.84).
“PSACs was the best part of the season,” Booth said. “It was awesome watching everyone, not only from Gannon but the other competing schools.”
As the Knights reflect on their expectations and performances, the team is looking forward to succeeding and beating their expectations.
“Personally, I was focused on dropping time,” Hancock said. “When it comes down to it, however, not everyone achieves their expectations — in fact most don’t. It is the rage you feel when your goal isn’t achieved that only fuels you to work harder and come back stronger and better.”
As team members look ahead to the future, they realize they need to work even harder to keep up with the competition, Booth said.
“It keeps getting faster so individually and as a team we need to get faster ourselves,” he said.
“As a freshman, getting my first PSACs under my belt will surely help in the future because now I know what to expect and what worked for me training wise.
“For now, we will just keep working hard and maintain a healthy shape until next season.”
Other PSAC results included James Fox, who was 14th in the 1,650 free; Drew Wolter, 11th in the 200 free, 12th in the 1,000 freestyle and 13th in the 100 and 500 free; Booth, 12th in the 200 breaststroke and 15th in the 200 IM; Ebel, 11th in the 500 freestyle and 14th in the 100 butterfly; Marshall, 12th in the 1,650 free; Noah Donovan, 14th in the 200 butterfly; and Collins, 14th in the 200 freestyle.