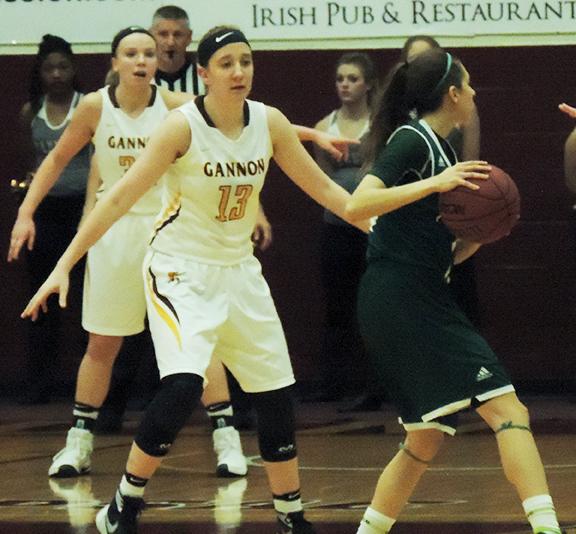 The Gannon University women’s basketball team continues to make strides in the right direction as it split a pair of Pennsylvania State Athletic Conference games last week.
The Knights fell, 88-68, on the road to the nation’s fourth-ranked team, California University of Pennsylvania, on Feb. 8 but rebounded to edge Clarion, 73-68, on the road in overtime Saturday.
The split gives Gannon an overall record of 8-17 and an 8-11 mark in PSAC action going into Wednesday’s 5:30 p.m. home game against Edinboro at the Hammermill Center.
The Knights’ win over Clarion featured an exciting finish, as Maggie Mitchell connected on a jump shot to tie the game at 60-60 with three seconds left in regulation play and send it to overtime.
Clarion had taken a 60-58 lead with 13 seconds left on Tyra Polite’s two free throws, but Mitchell – who finished with 26 points to lead Gannon – made good on her shot to tie the game.
In the extra period, Kelsey Herbert sparked the Knights with six of their 13 points to help them secure the victory.
Herbert finished with 12 points and eight rebounds in just 22 minutes of action.
Lauren Tewes delivered her first career double-double, as she also contributed 12 points and had a game-high 10 rebounds for the Knights, who outrebounded the Eagles 49-43.
Mitchell, who scored at least 25 points in three straight games, added eight rebounds as well.
Chelsea Rourke finished with nine points while Lanise Saunders added eight. Julia Braungart dished out five assists and had just three turnovers while playing all 45 minutes.
Gannon led by 10 at 53-43 with just under 6 minutes to play in regulation, only to see the host Eagles reel off 13 straight points to take a 56-53 lead with 1 minute, 26 seconds to play.
That set the stage for Mitchell’s game-tying shot in the closing seconds, which forced the game into overtime.
Three nights earlier, the Knights ran into a buzz saw in the form of No. 4 CalU, as the Vulcans sprinted to a 20-2 first-quarter lead.
But Gannon clawed its way back into the game and trailed 45-36 at halftime. The Knights pulled to within six points at 47-41 with 8 minutes, 33 seconds remaining in the third quarter, only to see the Vulcans regain control and pull away for the win.
CalU used a 15-0 run to extend its lead to 21 points and that sealed its victory.
Mitchell scored 27 points to lead Gannon while Tewes added 12.
Gannon shot an outstanding 51 percent from the floor, including 54 percent from three-point range, but committed 31 turnovers to just 11 for the Vulcans. CalU leads the nation in forced turnovers with an average of more than 28 per game.
Following Wednesday’s home game with Edinboro, the Knights will return to action at 1 p.m. Saturday on the road against Slippery Rock.