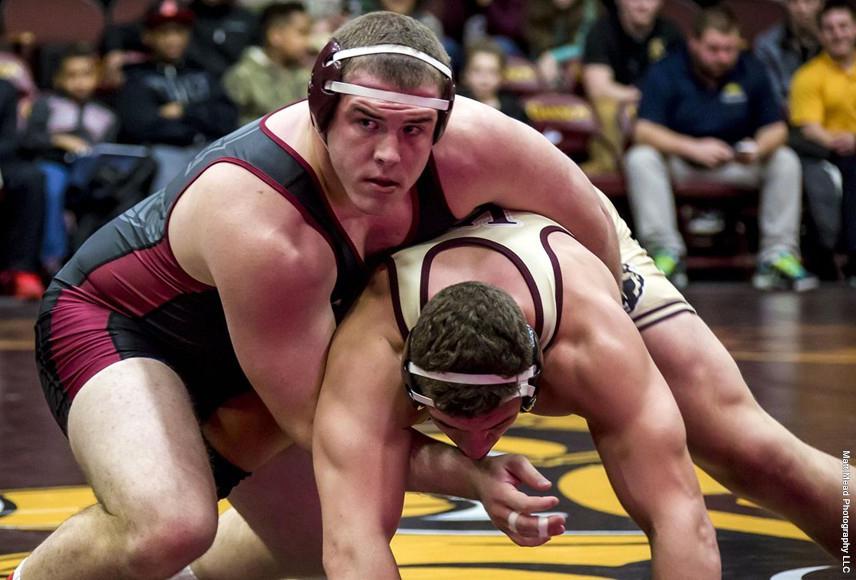 The Gannon University wrestling team had a huge weekend, overpowering Kutztown — the nation’s 25th-ranked Division II team — 32-7 at the Hammermill Center Saturday.
The Pennsylvania State Athletic Conference victory moved Gannon’s record in conference dual meets to 4-2 and left the Knights 5-2 overall going into Wednesday’s 7 p.m. meet against rival Mercyhurst at the Hammermill Center.
Gannon’s meet with Kutztown — ranked No. 6 in Super Region One — opened with Johnny Marotto posting a close 4-3 decision over Mikey O’Brien. Marotto, ranked No. 7 in the region, evened his record on the season at 9-9.
At 149 pounds, Gannon freshman Justo Hernandez made his dual meet debut against Chad Haegele, who is ranked third in the region. Haegele came into the match injured and learned early that he would not be able to compete the match and called for the injury default 19 seconds into it.
At 157 pounds, Gannon’s Eric Lewandowski — ranked No. 12 nationally and No. 3 in the region — continued to show his dominance with a 13-1 major decision win over Bill Manley.
A big matchup was set at 165 pounds, where Gannon’s Garret Smith took on nationally ranked T.C. Warner, but Warner — ranked No. 6 in the nation and No. 4 in the region — used a big third period to pull away to a 13-3 victory.
Gannon would get its momentum right back, thanks to junior Jake Stratton, who picked up a big pin of Joe Balboni. Stratton, ranked third in the region, stopped Balboni, the region’s fourth-ranked competitor, with just one second remaining in the first period.
Stratton was pleased with the win and said it’s nice to see the team become the group that coach Don Henry is trying to get them to be.
“We aren’t close to done yet though; Mercyhurst should be a good match for us,” Stratton said.
“I’m excited to wrestle again in front of a home crowd too, so that should be fun.”
The momentum after Stratton’s pin would continue with decision victories from Nick Costa at 184 pounds and Ethan Budd at 197.
The heavyweight matchup ended up being the match of the night, though, as redshirt junior Nick Budd, who is ranked sixth regionally, decisioned Ryan Appleby — ranked No. 10 in all of Division II — 6-3.
Budd started the match with a great takedown, but Appleby responded with a quick escape, leaving it 2-1 at the end of the first.
Budd’s escape accounted for the only point in the second period and Appleby got his own escape at the start of the third period.
But Budd countered with a tremendous takedown and finished the match by adding to his riding time. After receiving the riding-time point, Budd took the win 6-3.
The last win of the day came at 133, where freshman Carmine Ciotti claimed his 19th win of the season with a 10-1 major decision.
Gannon will have its hands full with rival Mercyhurst, as the Lakers are ranked fourth regionally and eighth in Division II.
Mercyhurst also has three nationally ranked wrestlers at 125, 165 and heavyweight, including the nation’s No. 1 competitor at 165 in Francis Mizia.