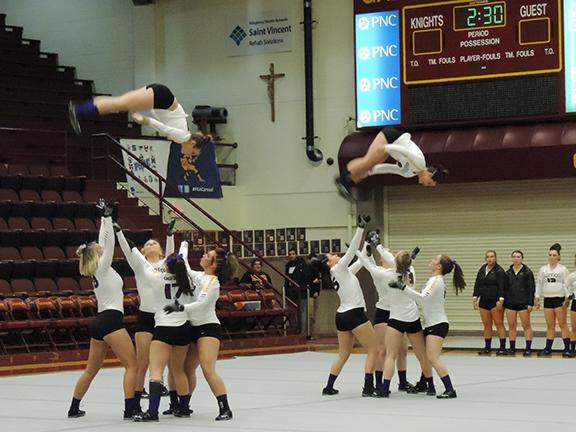 Prior to the season, Gannon University became a founding father of the Eastern College Athletic Conference’s acrobatics and tumbling league — the nation’s first intercollegiate league for the sport.
In its first campaign, four schools will make up the league, with Alderson Broaddus (West Virginia), Quinnipiac (Connecticut) and King (Tennessee) universities being the other three schools involved.
The Knights’ first ECAC meet won’t take place until Feb. 26, but their season got off on the right foot Saturday, as they started 2-0 for the second straight year.
Gannon defeated 11th-ranked Glennville State, 270.705-251.925, and 13th-ranked Adrian, 270.705-138.875, at the Hammermill Center.
The Knights’ second 2-0 start in the program’s four-year history came by way of winning 16 of the 19 heats on the day.
Sydney Pouliopoulos said afterward that opening with a pair of victories is a big confidence booster.
“Hopefully we can take all the good things we did this past meet and take them with us throughout the season,” she said.
Team members like Mikayla Vecchio are excited to be involved in the new ECAC league.
“It’s such an honor to be a part of such a fast-growing sport like acrobatics and tumbling,” Vecchio said.
The new league, she added, “really shows how much this sport has grown within the past few years.”
An ECAC league champion will be crowned based on head-to-head regular season competition and as the league grows, a postseason may become a reality.
The new conference will give student-athletes the opportunity to be crowned player of the week, a spot on all-academic teams and all-conference awards.
Gannon got off to a strong start in Saturday’s season-opener, winning the compulsory event, 38.30-35.45-27.95. Glenville State took second and Adrian placed third.
In the toss heat, the team of Chelsea Cowan, Nikki Pizzi, Elizabeth Martin, Cassidy Jelen, Hayley Nejman, Meghan Hughes, Jessica Page, Michaela Soper, Ashley Barrish, Brittney McNiff and Ciara Rand scored a near perfect score, tallying a 9.95 — the highest heat of the match.
Carrying the momentum of the first event, Gannon went on to top Glenville State, 28.45-27.95, and Adrian, 28.45-24.10, in the acrobatics event.
The Knights took a close 28.85-28.40-28.30 win in the pyramid event into halftime with an overall 95.60-88.95-76.75 first-half lead.
Often in this sport, after a long break, teams tend to come out flat in the second half. But that wasn’t the case for Gannon as the Knights continued to show their dominance, winning all three heats of the toss event on their way to a 28.00-27.30-23.45 overall victory.
Gannon capped the non-team events with a 53.375-48.025-38.675 win in the tumbling event, only losing one (aerial pass) of the six heats.
In the team event, Gannon put the match away for good, scoring a 93.73 out of a possible 105.84. Glenville State posted an 87.65 out of a possible 101.95, and Adrian did not participate due to not having enough members to meet the 18-member minimum for the team event.
Vecchio later added, “It felt as if we just picked back up from last year and our progression has been great thus far.”
The Knights reached the national quarterfinals before being eliminated from last year’s National Collegiate Acrobatics & Tumbling Association National Championships.
Gannon will head on the road for the second competition of the season, traveling to take on Alderson-Broadus at 2 p.m. Sunday, Feb. 26, in the first ECAC matchup for the Knights.