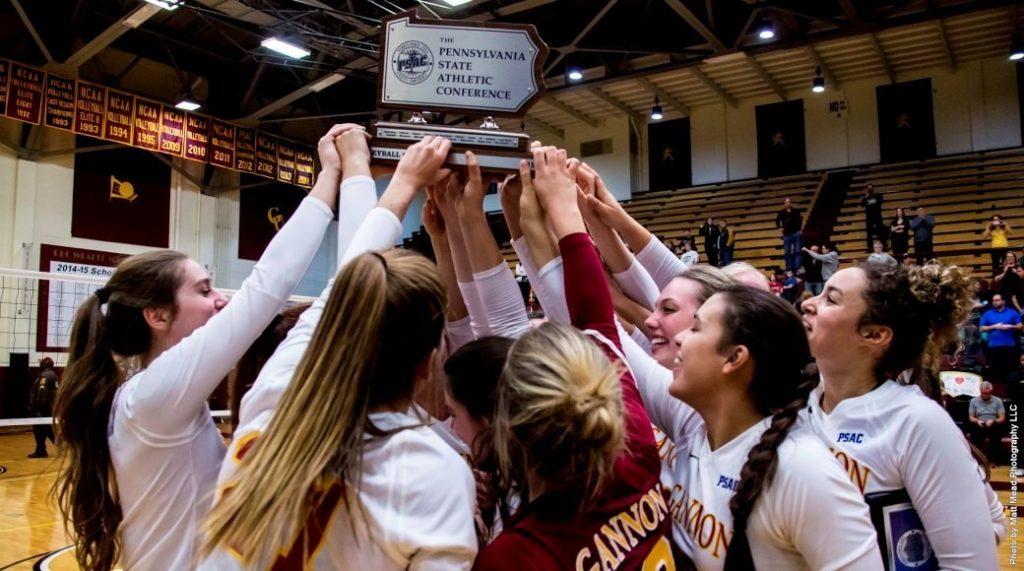 The Gannon University women’s volleyball team saw its run in the NCAA Tournament come to an end Saturday in a second-round loss to PSAC rival Edinboro, 3-0, in Wheeling, W. Va.
The 25-22, 25-22, 25-22 defeat brought an end to an historic season for the Knights, who were making their eighth straight appearance in the NCAA Tournament and went into the weekend event as the No. 2 seed in the Atlantic Region.
Gannon won the PSAC championship for the second time in the last five years and concluded play with a 31-4 record – the most wins since the 1992 season when the Knights reached the NCAA Division II Elite Eight and finished with a 40-2 record.
Gannon’s 31 wins are the fourth-most in program history.
The Knights had defeated Edinboro twice during the regular season, but could not complete the winning trifecta Saturday night in Wheeling. Coach Matt Darling attributes Edinboro’s win to its ability to capitalize on mistakes made by the Knights.
“I don’t think that Edinboro did anything different in the match on Saturday night,” Darling said.
“We were uncharacteristically error-prone and didn’t execute the game plan very well, and this combination of failures on our part opened the door for an energized, opportunistic Edinboro team to beat us and to their credit, they took advantage of it.”
Darling will always have fond memories of the season after winning the PSAC championship and he loved coaching the hard-working players. However, he isn’t fully satisfied with the season.
“It is a season that ended before it should have, so I also feel responsible to make improvements to the program so we can be better next year.” Darling said.
Gannon trailed just 20-19 in the opening set, but could not pull even and Edinboro held on for the win. The Knights were in a 20-20 tie in the second set but committed two straight miscues to open the door for a second Fighting Scots’ victory.Gannon used a 14-3 run in the third set to overcome a huge deficit and tie the score at 21-21, but Edinboro answered with three straight points and finished off the Knights with the third straight set score of 25-22.
Junior Kelsey Ansec led Gannon in kills with 11, Lauren Beck had five blocks and Carolyn Knollman had 29 assists. Knollman and Hannah Kren tied for the most digs with 16 and Sara Crandall had 12.
Edinboro, meanwhile, fell to top-seeded Wheeling Jesuit, 3-0, in Sunday’s regional final.
Gannon’s opening game in the NCAA Atlantic Regional tournament resulted in a 3-2 win over Fairmont State Friday in Wheeling in a match that saw 34 ties and 22 lead changes.
The Knights dropped the first set, 25-21, came back to win the second at 27-25, lost the third, 25-23, and then won the fourth 25-23 before advancing with a 15-10 win in the final set.
Sophomore middle blocker Lexy Johnson had a career-high 12 kills and a season-high 15.5 points, with a .333 hitting percentage, six blocks and two digs.
Kren posted her 13th double-double of the season with 13 kills and 11 digs. Crandall also contributed 27 digs to the team’s effort. Beka Smith helped the Knights with 10 kills and three blocks and Beck contributed seven kills and six blocks.
Kren said she feels blessed and she is incredibly thankful that she had the chance to be a member of the Gannon volleyball program for the last four years.
“Being a senior and captain of this team really put into perspective that we had something special on and off the court; we are family,” Kren said. “I would not have wanted to play with any other girls for my last season.”