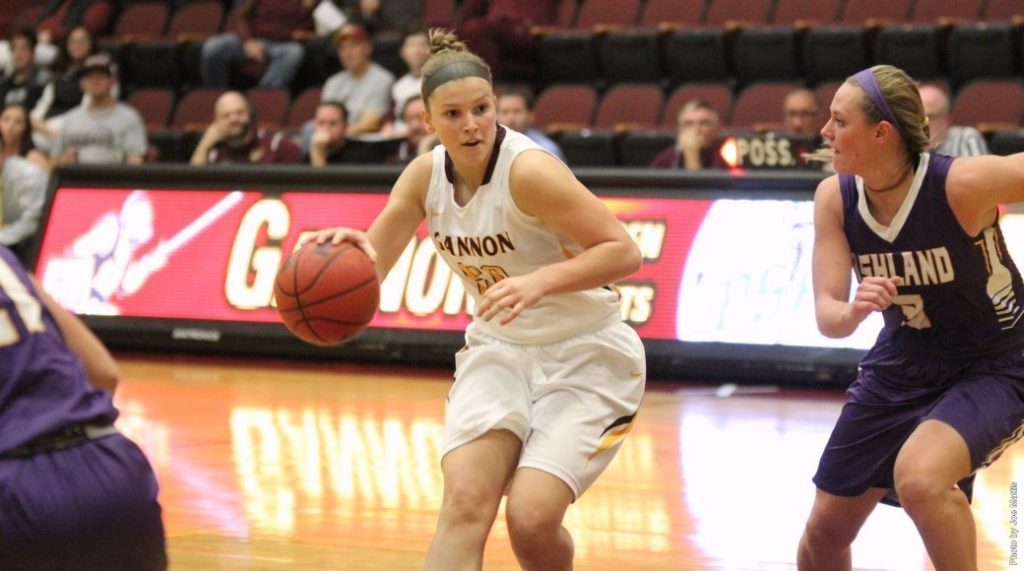 The Gannon University women’s basketball team split a pair of PSAC matchups over the weekend, falling to Lock Haven, 67-64, Saturday and then coming back to force overtime and ultimately defeat Bloomsburg, 71-63, Sunday at the Hammermill Center.
The Knights, who improved to 2-7 overall and 2-2 in PSAC play after the weekend split, trailed much of the way Sunday against Bloomsburg before moving ahead 45-39 early in the fourth quarter.
But Bloomsburg came back to get within one at 45-44 with 6 minutes, 36 seconds to play in regulation, and the Huskies eventually went up by one.
Gannon’s Lanise Saunders hit two free throws with 1:36 remaining but Bloomsburg’s Taylor Montana nailed a jumper and the Huskies converted two free throws to lead by three points with just 21 seconds left.
After a Knights’ timeout, Gannon’s Maggie Mitchell found Julia Braungart, who nailed a 3-pointer with 11 seconds to play, and the two teams went into overtime tied at 56-56.
Mitchell buried a 3-pointer with a little under 3 minutes to play in overtime and Nicole LaCava’s basket and two free throws helped the Knights extend their lead to 67-60, and Bloomsburg never threatened from that point on.
Sanders finished with 20 points – the first time in her career she reached that total – while Mitchell and LaCava each contributed 11 points.
Gannon shot 37 percent from the floor and converted 27-of-35 free-throw attempts — the second-most free throws made by a PSAC team this season.
Saturday’s matchup against Lock Haven looked like it would have a better outcome, at least based on the opening stages of the game when Gannon scored the first 10 points.
Lock Haven did not score a point until nearly 8 minutes had elapsed in the game, but that triggered an 11-0 run that gave the visiting Eagles a 13-11 lead after one quarter.
Gannon trailed by as much as eight at 40-32 with 7:41 left in the third quarter, but the Knights eventually clawed their way back into a 62-59 lead on Mitchell’s layup with a little less than 2 minutes to play in the game.
But Gannon went 0-for-3 from the field and missed 2-of-4 free-throw attempts in the final 83 seconds, enabling Lock Haven to move in front at 63-62, and a turnover led to two Bald Eagle free throws and a 65-62 lead for Lock Haven.
Mitchell converted two free throws with 8 seconds remaining to pull Gannon within a point but Lock Haven held on for the win.
Mitchell finished with 22 points while Braungart added 12 and Sanders added 10 points and 11 rebounds in a losing cause.
The Knights return to PSAC action at 1 p.m. Saturday in the Hammermill Center against East Stroudsburg.