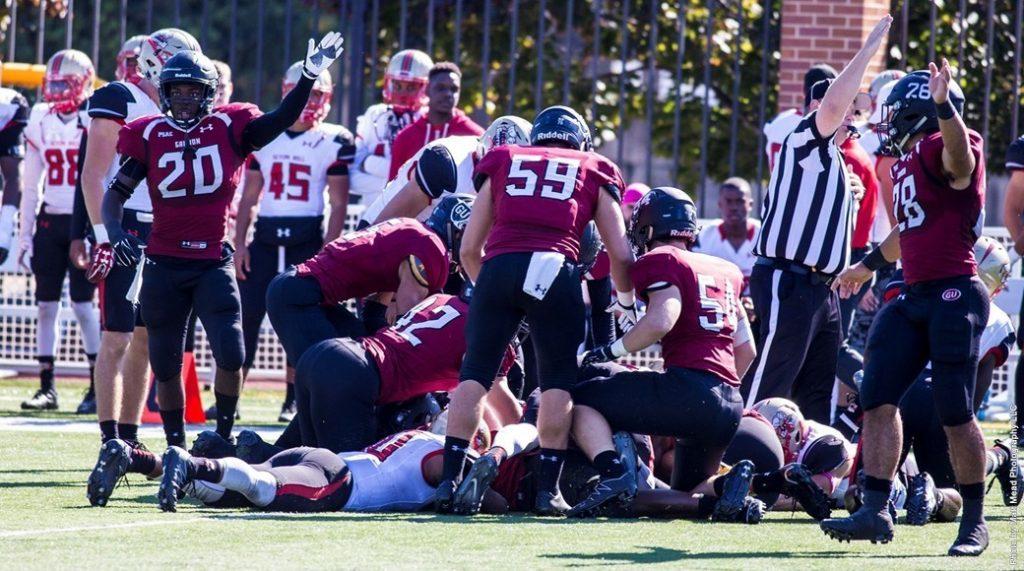 The Gannon University football team got off to a strong start but could not sustain it and lost its third straight game, 41-35, Saturday at Clarion in its final PSAC West matchup of the season.
The loss, the sixth in the last seven starts, left the Knights with an overall record of 4-6 and a 1-6 mark in PSAC West action. Gannon will conclude its season with a noon matchup against Millersville at McConnell Family Stadium.
Gannon drew first blood in Saturday’s loss to Clarion, with Tyler Johnson scoring the first of his two touchdowns — a 2-yard run — to put the Knights on top 7-0 less than three minutes into the game.
After the Knights gave up a field goal, Chris Carpenter picked off a pass and returned it 33 yards for a touchdown, giving Gannon a 14-3 lead. The Knights fell behind 17-14 but scored with less than a minute left in the second quarter when Zach Phillips hit Quad Law on a 17-yard touchdown pass to take a 21-17 halftime lead.
Clarion used two third-quarter touchdown passes from Connor Simmons to Kevin Genevro to build a 10-point lead and Gannon could get no closer than six points the rest of the way.
Although the Knights came out on the short end against Clarion, the game came with many highlights, a number of them from seniors who will be making their final career appearances Saturday against Millersville.
Senior defensive back Mike Zanders II passed K.J. Heider (1989-92) on Gannon’s all-time tackles list while fellow senior Matthew Gawlik moved into the school’s all-time top five in career sacks with 16.
Zanders surpassed Heider on the career tackles list during the second quarter and finished the game with 345 career tackles. Heider completed his career with 341 stops at Gannon.
Zanders acknowledged the accomplishment later.
“It’s a blessing,” said Zanders, who will have one more game to add to his total.
“I couldn’t have done it without my teammates fighting with me every Saturday and my coaches, of course, who set up the scheme that gave us the best chance to win every weekend.”
Fellow defensive back Carpenter also had an outstanding game against Clarion as he led the Knights with 10 total tackles to go with his perfectly timed interception that resulted in his 33-yard pick-six.
Going on the offensive side of the ball, Gannon had two players posting 100-yard rushing games.
Johnson, the senior, finished with 127 yards rushing and two touchdowns while sophomore Marcus Jones racked up 112 rushing yards and 170 all-purpose yards.
Another senior showing off his four years of experience was Law, who had 90 yards receiving, including his 19-yard touchdown reception.
Law, who added 110 kickoff yards, surpassed Gannon Hall of Famer Darmel Whitfield (2001-04) to move into seventh place all-time in all-purpose yards with 3,384.
In Millersville, Gannon will see a team that has been scuffling, as the Marauders hold a 2-8 record and have been outscored 344-163 so far this season.
Saturday’s game is designated as Senior Day to recognize the hard work put into this program by 10 senior or redshirt senior student-athletes on the team.
In addition to Senior Day, this will also be Military Appreciation Day. Gannon will have many different activities going on that day and all veterans and their families will be admitted to the game free of charge.