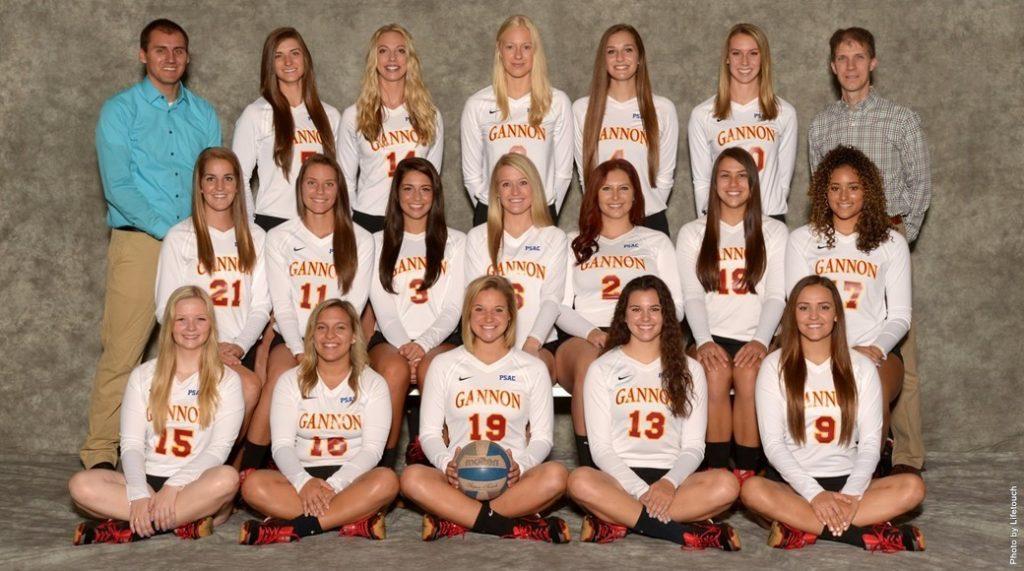 The Gannon University women’s volleyball team has hit the ground running, opening its season with a sweep of the Tony Banner Invitational at Clarion University over the weekend.

Senior outside hitter Hannah Kren led the team with 18 kills and 23 digs in game one, tallying a 0.349 hitting percentage.

Junior Kelsey Ansec also contributed 14 kills, three digs and four blocks. Four of her kills came in the final set, which helped the Knights secure a win in the 15-13 victory.

In game two, Gannon met the Storm of Lake Erie College. The Knights took the first two sets to put themselves up 2-0, but the Storm answered that by taking the next two sets to create a 2-2 tie.

But with the help of redshirt junior Beka Smith and her 13 kills, four digs and one block, the Knights were able to win the final set and take home a 3-2 win over Lake Erie.

Ansec felt as though it was a great weekend for Gannon volleyball.

“The whole team connected well, which created a positive atmosphere and contributed to our wins,” Ansec said. “We’re excited to start playing games at home and have the support of our Gannon family,” she added.

On Saturday, Gannon followed up with two more victories, this time over Merrimack and Hillsdale College.

In game one of the second day, the Knights came out strong and beat Merrimack 25-19 in the first set but then dropped the second set, 25-23.

In the final two sets, Gannon crushed Merrimack 25-13 in both, giving the Knights a 3-1 win and making them 3-0 in the invitational up to that point.

Ansec again came up big with 17 kills and three blocks in the game.

Game four of the invitational was a big one for both teams because Gannon and Hillsdale each could potentially get its first loss of the season.

However, Gannon came out on top with a 3-0 shutout victory.

The first match was a nail-biter as Gannon slid by with a 27-25 win, which provided the Knights with enough horsepower to keep it up in the next two sets.

Set two proved to be another close one. With the score 5-5, the Knights took off on a 9-2 run, which put them up 14-7. Once there, Gannon maintained its position and won the second set 25-17.

The Knights then followed that victory up in similar fashion with a 25-18, win giving them a 3-0 victory.

Ansec again was a key player in the game with nine kills and junior Anne-Mari Kaur, the Estonian powerhouse, had a career-high nine block assists to help Gannon seal the victory.

Junior Sara Crandall thinks the team is off to a good start and thought it was a great team effort this weekend.

“Moving forward, we have high expectations for the season and we are all excited to continue working hard to achieve our goals,” Crandall said.

Coach Matt Darling was overall happy with the weekend, the team showed confidence and the win over Hillsdale was huge because the Chargers are known as one of the better programs in the country.

“It’s a long season, and we will be playing some very tough teams this year,” Darling said. “Our approach is to take things one match at a time, making sure that we’re keeping our focus on the fundamentals. If we can stick to that plan, I think we’ll be where we want to be.”

So far, the Knights are 4-0 on the season. Up next, they will play host to a crossover tournament between the PSAC and Mountain East Conference (MEC) Friday and Saturday at the Hammermill Center.

Gannon’s first action will come at 1 p.m. Friday against Concord University, and tournament play will continue through Saturday.