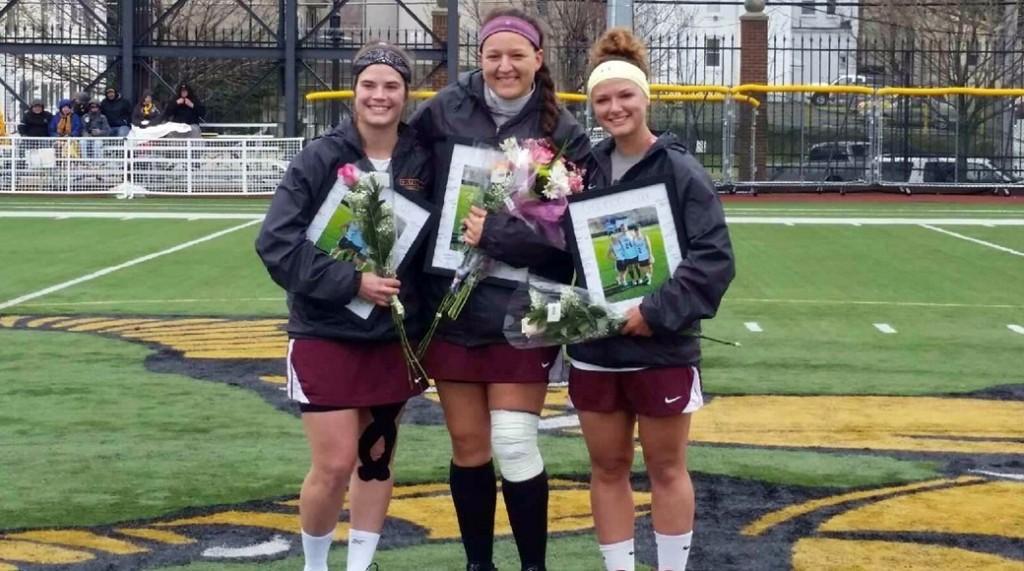 With its final game of the season Saturday, the Gannon University lacrosse team had to take on a team that was fighting for a spot in the PSAC Tournament — Millersville.
The Knights came up short, falling 14-10 to the Marauders on Senior Day at McConnell Family Stadium.
The loss left Gannon with an overall record of 6-11 on the season and 3-9 in PSAC play.
The team took time to honor its three seniors – Kelsey Bright, Paige Darby and Becky Hilker — during the pregame festivities.
All three of the players came to Gannon for the 2013 season, and each spent all four years playing for the Knights. Though injury has kept each limited in her own way, each still has a full stat sheet of impressive numbers.
Saturday’s matchup was a hard-fought battle, with Millersville – in sixth place in the PSAC heading into the game – needing a win to earn a berth in the conference tournament.
Gannon, meanwhile, was looking to end its season with a win and a victory at home for its seniors and to keep its consecutive win streak against Millersville alive.
Gannon had beaten the Marauders nine straight times, including all six previous PSAC matchups between the two teams.
The game started with nearly eight minutes of scoreless action before Millersville broke out on top and scored four unanswered goals in a 10-minute span.
The Knights finally got on the scoreboard when Bright assisted on Tessa Mitchell’s goal with a little less than 10 minutes to play in the first half.
That sparked a new light into the team for the rest of the half, with Gannon scoring four more unanswered goals to take a 5-4 lead with 4 minutes, 13 seconds remaining in the half.
Bright scored on the first of two assists from Ashley Mozingo, Ashley Bower followed with the first of her three goals, getting help from Mozingo, and Mozingo notched back-to-back goals – one unassisted and one on a free position shot – to make it 5-4.
But Millersville would respond with two goals of its own in the final three minutes of the first half to put the halftime score at 6-5 in favor of the Marauders.
The second half started basically the same way as the first with Millersville scoring the first five goals to widen its advantage to 11-5 10 minutes into the half.
Gannon sophomore Leilani King was able to snap the hot streak with an unassisted goal to make it 11-6, but Millersville answered with two more to make it 13-6.
Bower led the charge for Gannon, scoring two more goals to give her the hat trick. Hilker was able to score her own goal and with the clock winding down King scored one more.
After literally a last-second goal by Millersville’s Bridget Hufnagel, the game ended 14-10.
Gannon finished with a 24-21 edge in shots and a 16-13 advantage on ground balls. Ali Owczarzak led the defense with four ground balls and Kat Martinelli recorded three saves in goal for the Knights.