Theology on Tap more than just beers with Jesus 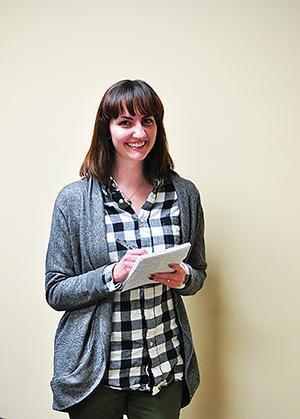 Gannon University’s Campus Ministry scheduled the final Theology on Tap event for Monday night.  I was ecstatic.  Usually, it’s held on a Tuesday night, which is always out for me while I’m working as part of the Knight staff beyond last call.

Since I was able to go this week, I took my wallet and my reluctant roommate, Holly, to meet the other students attending at Waldron.  I was surprised to see the hallway normally filled up with fundraising tables filled up with students of all majors interested in “having a beer with Jesus.”

That wasn’t exactly the point of the night, but I think it’s a good way to describe it.  The crowd of 30 followed Chris Beran, the director of the Bishop Donald W. Trautman House, to Lavery Brewery on 12th Street.

It was literally a hole in the wall, since Beran missed the turn initially and we back-tracked through a seemingly empty parking lot into the bar.  Lavery specializes in craft beer, and brews its own drafts in house.

That was evident as we walked through the front door and were greeted by metal vats and brewing equipment caged off as if someone would take off running with it.  The theme of the event was trivia, since it was the last feature of the year.

Usually, Theology on Tap focuses on a particular issue or question in theology and brings students and faculty in to talk about it.  This time, we were asked to form groups and answer questions about culture, the Bible, sports and Beran’s life in Campus Ministry.

Holly asked me why Catholics could “condone” drinking, and I tried to explain how temperance is a Protestant idea, saying that enjoying food and drink is part of God’s plan for us.

“When you are gorging yourself, that’s bad,” I told her.  “But enjoying a piece of chocolate cake that you made is what God wants.”

Granted, my example isn’t the best, because we can’t exactly enjoy things like chocolate cake every day.  But there’s no harm in enjoying a few drinks, as long as you’re not doing it in excess.

G.K. Chesterton, considered a theologian and philosopher for his 20th century writings, said, “In Catholicism, the pint, the pipe and the cross all fit together.”  Catholic tradition tells us we are allowed to take pleasure in earthly things, and focuses more on the context.

That’s enough on my two cents of theology.  We sipped Lavery’s Dixon’s Cider, a tart take on apple ale, and found our team knew more about current events like the Panama Papers than we did about rules for Catholic priests.  I don’t think that’s a necessarily a bad thing.

We were all able to quote John 3:16 and list the Synoptic Gospels, standard fare for a 14-year veteran of Catholic schools like me.  Holly joked I should be ashamed for not knowing the name of the encyclical Pope Francis just released, “Amoris Laetita.”  Francis wrote the document to start dialogue between parishes and people of “irregular” marriages, including divorced and gay couples.

Considering Francis’ demeanors, the subject was no surprise to me.  I can’t help but thinking maybe I should read up on church news as often as I do secular news, though.  So if you’ll excuse me, I have an encyclical to read.