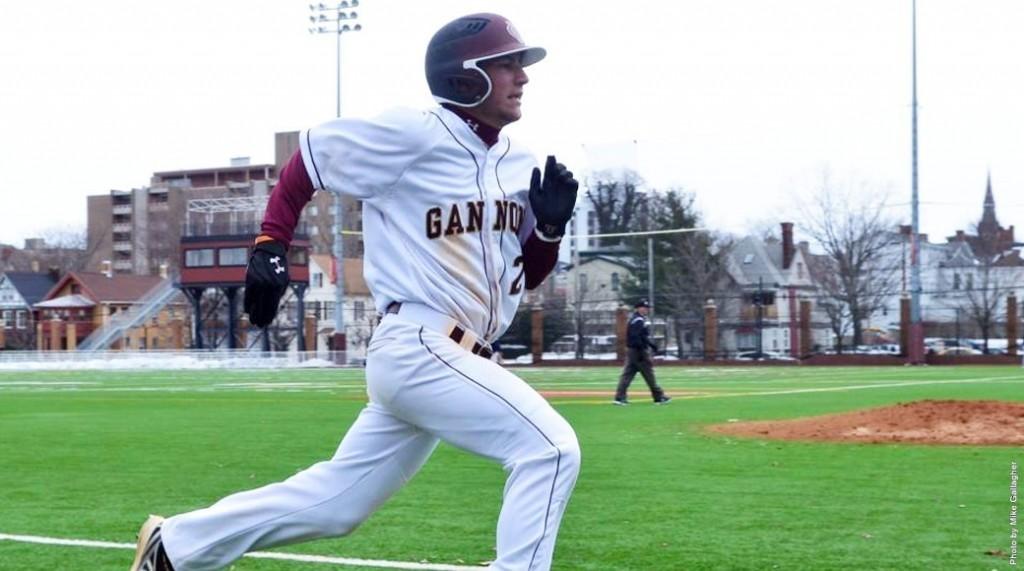 he Gannon University baseball team will battle rival Mercyhurst this weekend with a piece of first place in the PSAC West on the line.
The Knights, 21-8 overall, are 9-3 in PSAC play as are the Lakers and California University of Pennsylvania heading into weekend action.
Gannon will travel to Mercyhurst for a 1 p.m. Saturday doubleheader before returning to McConnell Family Stadium to host the Lakers in a 1 p.m. Sunday twinbill.
The Knights are ranked eighth in the Atlantic Region while Mercyhurst is No. 4.
Gannon whipped Pitt-Johnstown, 16-1 and 16-6, on March 26, then dropped three of four to California (Pa.), losing 9-7, 13-0 and 9-1 and winning 8-3 last weekend.
Nick Restuccia had a monster game in the 16-1 win over Pitt-Johnstown, going 3 for 4 with six RBIs. Kyle Cox had three hits and scored three times while Nate Cardy added two hits and drove in three.
Matt Oruch also scored three runs and had a pair of hits while Jared Wiesen had two hits and scored twice.
The Knights pounded out 17 hits while Gannon starter Santiago Mendez, who improved to 5-0, limited Pitt-Johnstown to five hits and a run in six innings of work. The hit parade continued in the second game, as the Knights collected 20 hits in the 16-6 win. Mark DeVita and Oruch each had four hits, with Oruch scoring three times and DeVita driving in four runs.
Cardy added four RBIs, Wiesen had three RBIs and scored three times and Anthony Grimone had two hits, drove in three and scored twice.
Gannon relievers Matthew Yough and Nico DiPaolo combined to work 3 2/3 innings of shutout relief to clinch the win.
In the Knights’ only win in their four-game series with CalU, Gannon jumped to a 4-0 lead in the first inning. Charles Benack contributed an RBI single in the rally and also scored on Cox’s single.
Benack finished with two hits, as did Wiesen and Cox, with Cox driving in a pair of runs.
Joey Colosi earned the victory on the mound, working the first 4 1/3 innings and yielding six hits and three runs. Yough and DiPaolo combined for 2 2/3 more innings of shutout relief.
Benack, who contributed to the Knights’ cause, said he is feeling very positive about where his team is at this point.
“As long as we continue playing the way we know we can, and take a couple games against Mercyhurst and Seton Hill, I think that we have a really good chance to make the playoffs,” he said.
Following this weekend’s series with Mercyhurst, the Knights will take on Slippery Rock in a four-game series Friday and Saturday, April 15-16.