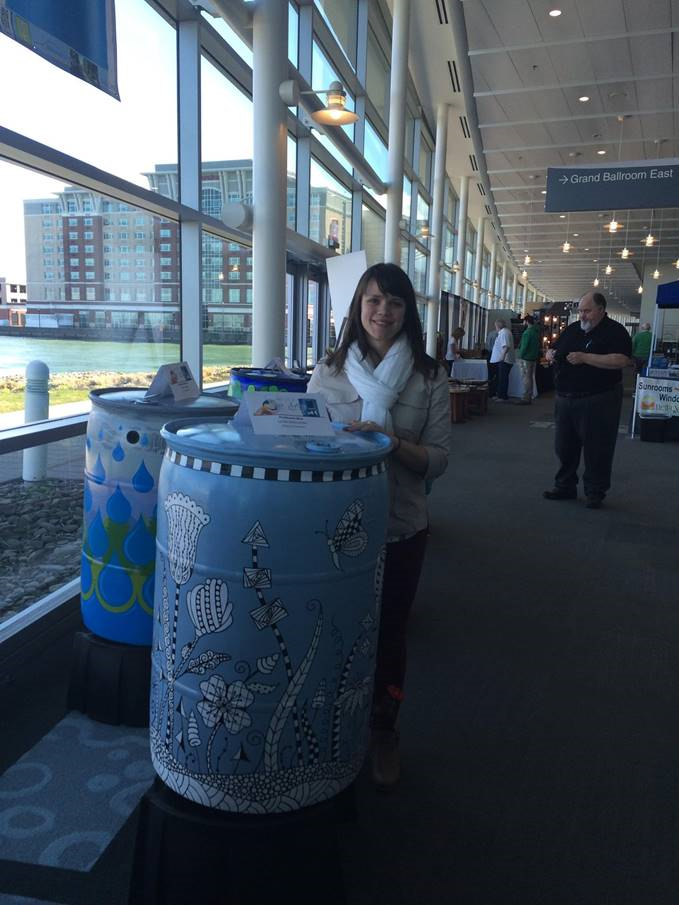 Robins aren’t the only ones ready for spring at Gannon University. The Gannon Goodwill Garden is starting a new composting plan with Metz Culinary Management, receiving honeybees for pollination purposes and soon installing a rain barrel as part of the “Don’t Give up the Drip” program.

“Don’t Give up the Drip” is a cooperative between Erie County Conservation District, local artists and businesses. The barrel designated for the Goodwill Garden is one of 50 rain barrels to be used in the community.

LeAnn Krysiak, an Americorps VISTA member and director of the garden, said the barrel will be useful in promoting community involvement in the garden as a source of water beside West Hall.

“There could be more community gardening because they would have the autonomy to do these things themselves,” Krysiak said.

Krysiak said the fact that the rain barrels are painted promotes sustainability and heightens their visibility. The garden’s barrel will be used primarily to water the garden, but Krysiak said students and the community are welcome to use the collected water for other creative solutions.

The garden received two new composters built by engineering-focused first year seminar students and will use food scraps from Metz to fertilize the garden.

Krysiak said Metz requested the food be used in the garden rather than sending to a landfill, and the project will weigh the amount of food sent to the garden. It will then be carried to the garden in a wheeled garbage can that Krysiak said will eventually become a student-run job.

“Sustainability is sometimes tied to corporate responsibility,” Krysiak said of composting. “It lets them use waste for something else, so it’s not just sitting there in a landfill.”

Krysiak said this project helps Metz as well as students, who will learn about sustainable ways to reduce waste and aspects of healthy composting.

“Hopefully it’s something they will adopt after graduation and use in their own lives,” Krysiak said.

Vince Paczkoski, a sophomore history major, said he thinks the garden has good ideas with the rain barrels and composting, but it might be easier for students to use compost from West Hall rather than Metz, considering the distance between the cafeteria and the garden.

“You have to remember this is Erie,” Paczkoski said. “This was a mild winter, but if we have anything like last winter, they’re not going to get it done.”

Preassembled composting kits can run from $60-$100, but there are cheaper ways to keep organic disposables out of landfill.

One option is open air composting, a no-cost system where you add compost to your garden by keeping the pile outside without keeping it in a separate container beforehand. Erie offers a composting class, called Black is the New Gold, where participants receive a composter upon completion. Or you can keep compost material in an airtight container outside until it is ready to use.

The garden will soon receive a beehive as part of a grant from the Honeybee Conservatory. Krysiak said she is excited to use the bees, but many people have a negative initial reaction because they are afraid of bees.

“We talk about bee stings, but not about their significance,” Krysiak said.

In order to combat this, Krysiak said she is working with Becky Perry at West Hall to hold a bee-friendly workshop to introduce the beehive to the community and teach them how to interact or not interact with the bees.

Krysiak said the bees used in the garden are less aggressive than honeybees, which people associate with bee stings.

An introduction and orientation to the garden will be held at 5 p.m. in the garden Wednesday to go over needs and logistics. It is free and open to the public.

A seed planting night will be held April 27 to get plants started for the garden and 20 students will replace 10 plant beds in the garden for Day of Caring.

“One thing that is exciting about Day of Caring is I will have students from the Detroit ABST,” Krysiak said. She joined students in Detroit over spring break to serve people in the inner city.