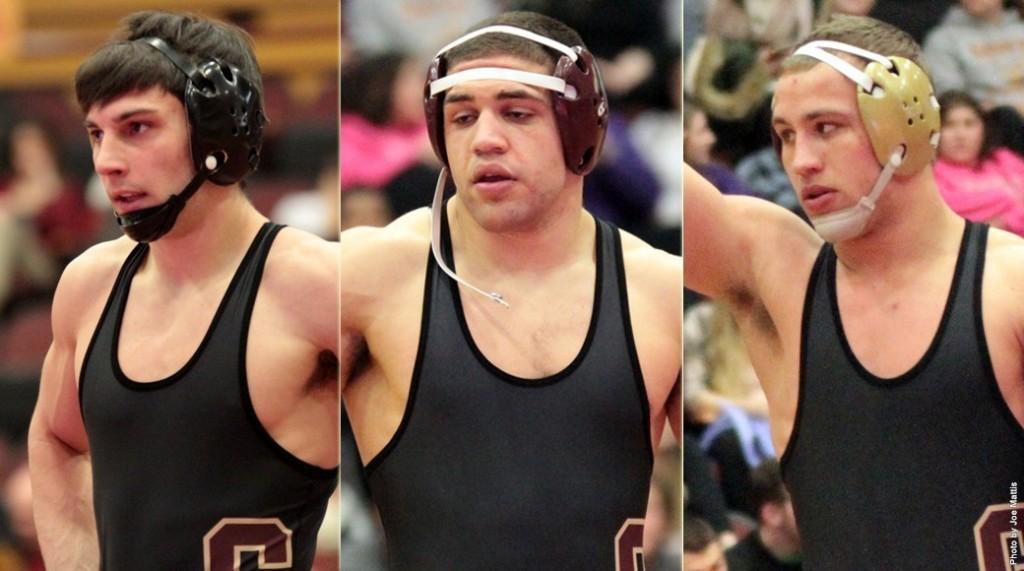 Each of these wrestlers was making their first appearance in the national tournament.

Starting at the lightest wrestler on the team in the tournament, the 141-pound Marotto put a full shock into the arena when he defeated fourth-ranked Pernevlon Sheppard of Wisconsin-Parkside.

Marotto ended up giving away two penalty points to stall calls, but it wouldn’t change the end result with him getting his hand raised when it was all said and done.

That would Marotto’s only victory of the tournament, as he fell by pin to fifth-ranked Darren Wynn of McKendree 31 seconds into the second period of the championship quarterfinals, and then dropped a 3-0 decision to returning All-American Corbin Bennetts of Western State in the second consolation round.

Marotto finished his season at 17-13.

At 165 pounds, team captain Ross was eager to show his high-paced offense at the national level.

After taking a tough loss from Lake Erie College’s Matthew Vandermeer, 2-0, Ross showed his skills with a 14-3 major decision against Zak Benitz of Upper Iowa in the first consolation round.

Ross was eliminated in the second round of consolations by Tyler Mclean of Simon Fraser. The 6-1 decision loss came from Mclean scoring a pair of takedowns against Ross.

Matthews, at 174 pounds, had a tough task in front of him from the start, with his first match coming against second-ranked Zeb Wahle of Maryville (Mo.). Matthews was able to stun his opponent with the first takedown at the start of the bout. That would be Matthews’ only points of the match, however.

Matthews would go on to take his second loss of the tournament, 12-2 to Colorado State Pueblo’s Tarrence Williams in the consolation first round, and was eliminated the first day.

Gannon coach Don Henry said later that he was pleased with his wrestlers’ performances.

“They didn’t wrestle perfect, but they wrestled intensely and they didn’t give up or any breakdowns.” Henry noted that it was a rough season with the injury setbacks to the team.

“It was the toughest season I have had to coach in 30 years,” he said. “Losing Nate Reckner for the season, Nick Costa and George McGuire at the end of the season — that affected our lineup along with other injuries.”

On the other hand, the injuries gave opportunities for some of Gannon’s younger wrestlers to step up and take on the challenges. Henry noted that freshman 125-pounder Casey Vollmer, for example, had to wrestle some of the top competitors in the country.

“There were no easy matches for him,” Henry said of Vollmer. “But he did his job every match, which is what we asked of him.”

Henry said he’s already envisioning his future teams and adding to the mix.

“We are looking for the guys who are going to be the best fit for the roster and not necessarily the best overall guy,” he said.

Henry said that the Knights should have a list of committed future members of the roster within the next few weeks.