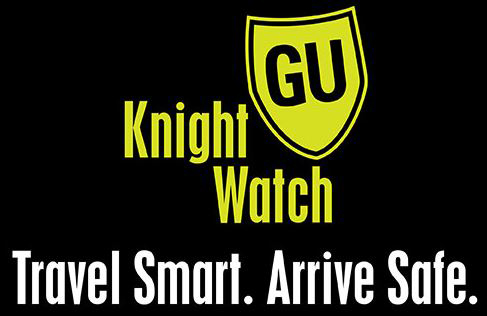 Gannon University has revamped it’s G.U.E.S.T. Program and has rebranded it as Knight Watch. The program works alongside Campus Police and Safety to get students where they need to go with a greater sense of security.
Knight Watch still offers escorts who walk with students at night when they go back to their dorms or their cars.
Escorts are available from 5 p.m. – 1 a.m. Sunday through Thursday and from 5 p.m. – 2 a.m. Friday and Saturday.
Escorts are on duty at multiple locations around campus, including Nash Library, Palumbo Academic Center, Zurn Science Center and in the Power Room in the Waldron Campus Center.
The new aspect to the program is the shuttle service. The shuttle service will operate from 6 p.m. to midnight Sunday through Thursday and from 6 p.m. – 2 a.m. Friday and Saturday.
The shuttle service will be available between French and Liberty streets and East 12th Street and the Bayfront Parkway.
Les Fetterman, the assistant director of Campus Police and Safety, said the shuttle service is a temporary service that Knight Watch will offer until the end of the semester.
The shuttle service will stay depending on how many students utilize the service for the remainder of the semester.
Fetterman said Police and Safety decided to revamp the escort service mainly because students weren’t using it as much as they wanted them to.
“We’re doing all sorts of things to attract more people to use the escorts,” Fetterman said. “[We have] new uniforms, we’re using people with outgoing personalities to approach students and ask them to walk. We just want students to use it.”
Fetterman said the more Police and Safety talked to students, the more it sounded like they weren’t comfortable asking for an escort.
Another new feature of Knight Watch is that they can now send a text message to request an escort. This will provide a quicker response in the hopes that students will actually use it.
“We’re also trying to get our Knight Watch people to be proactive and actually ask the students when they see them leaving,” Fetterman said.
Any students who are eligible for work-study positions are able to apply to be a part of Knight Watch. These students go through training before they begin the job.
Connie Kercher, the assistance vice president for recreation and wellness, and Ted Marnen, the director for Campus Police and Safety, conduct the staff training. They teach the students to be outgoing and to be proactive about their job.
Fetterman said he has hopes of the shuttle service becoming a permanent service.
“Maybe it’ll turn into something that we do during the day and it’ll run students to the ACL lab or to the train station or bus station,” Fetterman said.
“They’re not trained in mixed martial arts or anything, but they have a police radio and that’s what makes it safe.” Fetterman said. “They have instant communication if there’s a problem.”
SAMANTHA GRISWOLD
[email protected]