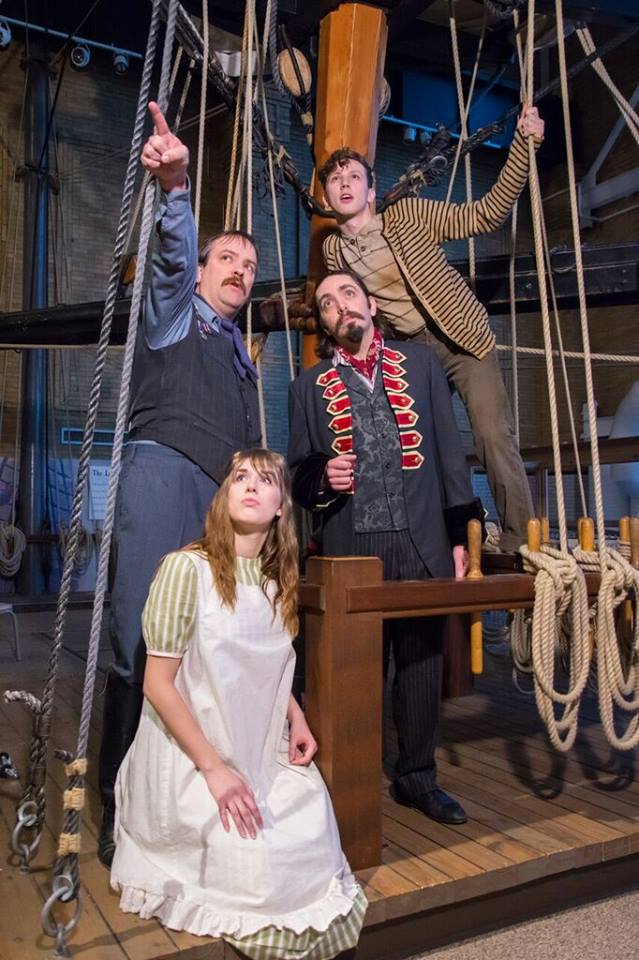 Have you ever wondered how Peter Pan became the boy who never grew up?
Instead of flying to Neverland to get those answers, the Erie Playhouse presents “Peter and the Starcatcher.”
This prequel to J.M. Barrie’s original story of “Peter and Wendy” brings a humorous backstory to our favorite lost boy of Neverland.
This creative play also includes two Gannon University students cast as the main characters of Peter and Molly.
“Peter and the Starcatcher” is based on the 2006 novel written by Dave Barry and Ridley Pearson.
The play opened on Broadway on April 15, 2012, and quickly became a hit, winning five Tony Awards and being named Broadway.com’s Audience Choice Award for Favorite Play.
In the play, we are introduced to an orphaned child, whom we know today as Peter Pan, called Boy.
He meets a young girl named Molly, the daughter of a famous Starcatcher, who has been entrusted with a chest full of magical “star stuff.”
It is her duty to hide this treasure from the evil Pirate Black Stache.
Molly and Boy sail on the Neverland ship on a voyage to keep the “star stuff” from getting into the wrong hands, and end up forming a beautiful friendship along the way.
The two main characters of Boy and Molly are played by Gannon seniors Zak Westfall and Jenna Sulecki.
“I start off as a boy without a name who is just fighting to survive,” Westfall said.
“You see him go from absolutely nothing to this magical, historical character that everyone has come to know and love.”
The character of Boy goes on a journey to become who he is known as today, Peter Pan, but could not do so without the help of his friend, Molly.
“Molly is not a name you recognize from the Peter Pan story,” Sulecki said. “You don’t really find out till the very end just how much she contributes.”
The character of Molly, in the play, helps to shape Boy into today’s Peter Pan. According to Sulecki, Molly encourages Boy to be a leader, teaches him how to fly and overall takes him on the adventure that leads to his destiny.
Westfall and Sulecki, two of the younger members of the cast, said it is exciting to perform in such a different environment with different actors.
“At Gannon,” Westfall said, “We have an inherent limitation with our black-box theater, but the proscenium stage at the Playhouse allows for distance from our audience, which is a new experience altogether.”
He continues to say how the Playhouse is a comforting, caring community that truly feels like a family.
When asked why people should see the show, Sulecki brightened up with excitement saying, “It’s truly out of a kid’s imagination. So many parts are over the top crazy,” she said.
“See it because it’s not something you’re likely to see in Erie ever again.”
Truly discover who Peter Pan was before Neverland, how Hook actually got that hook on his hand or even just to see two Gannon students perform something magical about your favorite childhood story.
The Erie Playhouse’s performance of “Peter and the Starcatcher” continues this week at 7:30 p.m. Wednesday through Saturday, and at 2 p.m. Sunday.
Tickets are $16-$25 and are available at www.erieplayhouse.org.
LAUREN SOVIKSY
[email protected]