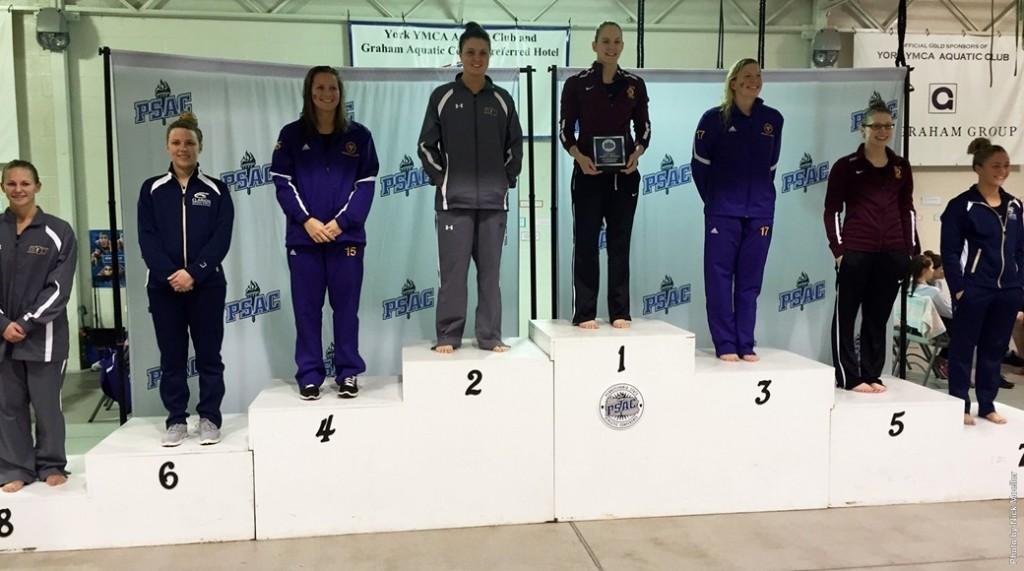 The Gannon University swimming and diving teams used record-setting performances to finish fourth in both the men’s and women’s divisions at last weekend’s PSAC Championships in York, Pa.
The women managed to capture four individual first-place finishes – the first since Gannon joined the conference prior to the 2008-2009 academic year – and one relay top finish.
The men, meanwhile, posted several top-three finishes and 13 All-PSAC efforts as well as three school records and three NCAA “B” cut times.
On the women’s side, Emily Nottingham became the first Gannon swimmer to win a PSAC title when she took the 50 freestyle in 23.63 seconds.
Nottingham also took part in the victorious 400 freestyle relay team along with Morgan Lydic, Madeline Summers and Courteney Hubert. The group posted a “B” cut time of 3:28.51.
Nottingham also took third in the 100 free with a “B” cut time of 52.2 in addition to her relay duties.
Nottingham said she is proud of her accomplishment and the team’s performance last weekend.
“PSACs was overall a wonderful way to end our season and some of us our careers,” Nottingham said. “We won five PSAC titles and a few broken records.”
Lydic, meanwhile, won the 100-yard freestyle with a time of 51.73 seconds and also teamed with Nottingham, Summers and Ruby Rodriguez to finish second in the 200 freestyle relay with a school-record and “B” cut time of 1:35.35. Lydic also placed fifth in the 50 freestyle.
Summers also was an individual winner, posting a first-place time of 2:06.63 to take the 200 butterfly in addition to her relay efforts.
Gannon’s Abby Wu was the final Knight individual champion, as she swept to a win in the 200 backstroke in 2:03.69.
Tessa Hayman finished second in the 100 butterfly in 57.80.
On the men’s side, Denys Fedorchenko placed third in the 200 butterfly with a “B” cut time of 1:51.32 and also helped three different relay groups to third-place finishes.
Fedorchenko swam with Drew Wolter, Allan Collins and Michael Weiser on the 400 free relay team that posted a time of 3:06.25.
He also joined Dionisio Carey, Mike Smith and Nils Groeppler on the 200 medley relay group, which set a school record with a mark of 1:33.31.
Fedorchenko also combined with Matt Loughner, Collins and Weiser to place third in the 200 freestyle relay in 1:24.37.
Groeppler placed fourth in the 100 butterfly with a time of 49.68 —.04 slower than the school record he set during prelims – and finished ninth in the 200 IM with a school-best mark of 1:53.86.
Fedorchenko said he is thankful for the support Gannon has offered him and hopes future athletes will continue the Knights’ recent success.
“As a senior I am proud of myself, team, coaches and staff that we are doing such a great job in college sports,” Fedorchenko said.
Gannon’s first-year coach Darren Suroviec said he was very proud of his team’s performance at the PSAC Championships, and he liked to see how the Knights came together with strong pride and momentum.
“We are on the radar now,” he said. “Many coaches congratulated us and were impressed with how far the program and team has come in a year.”
Now, Gannon swimmers who recorded “B” cut times at any time throughout the 2015-16 season will await hearing if they received invitations to the 2016 NCAA Division II National Championships March 9-12 in Indianapolis.