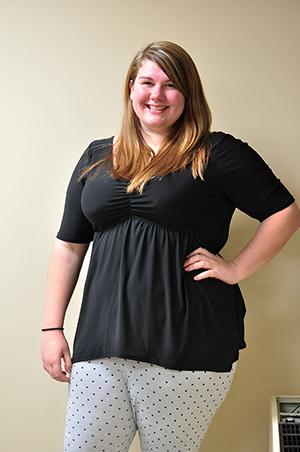 I was very shy as a freshman. I was a commuter student and I didn’t know anybody else who went to Gannon.
I remember being at the Gannon orientation events when WERG was there. When I walked by, the students running the booth asked if I’d like to sign up to be on air.
I automatically said no because that seemed like a really scary thing to do. I did not like talking in front of people, much less where thousands of people could hear me.
When I finally started my classes at Gannon, one of my first classes was Presentational Strategies. It was a speech class taught by Mary Carol Gensheimer.
One of the very first assignments she gave to us was to sign up for an air shift on WERG – I was terrified.
We were required to have a two-hour shift on WERG once a week for the entire semester and it was counted for a grade.
I had to learn all about the equipment, how to talk properly, what to talk about and how to use the equipment.
My first couple of air shifts were rough because I was so nervous. I was still very shy and sometimes I messed up the controls.
The staff at WERG was so nice and understanding about everything. They helped train me so I could become a professional on the air.
Being on the radio was the last thing I thought I would be doing in college. I didn’t like the thought of speaking to large amounts of people.
Little did I know, WERG was one of the best things I could have gotten involved in.
I love the atmosphere of the School of Communication and the Arts in general; everybody knows everybody by first name (even the teachers) and it’s like one big family.
WERG helped me fit in and become a part of the Gannon community, even though I don’t live on campus.
I ended up sticking around to become the music director my sophomore year and I loved it. Music was – and still is – my thing and it helped me learn how radio professionals handle it. I was the music director for the entirety of my sophomore year.
I came to love everybody as if we were brothers and sisters. I loved the way I was able to fit in with them, even though I didn’t live with them.
Even though I’m not a part of the management staff anymore, I’m still in the studio a lot.
I have a two-hour show each week and I also prerecord music news to air on the station.
I still keep up to date with the latest music trends and releases, even though I don’t have to – music is one of my passions.
Joining WERG was one of the best decisions I made during my college career.
Who knows? Maybe it could open up career paths I’ve never thought about before.