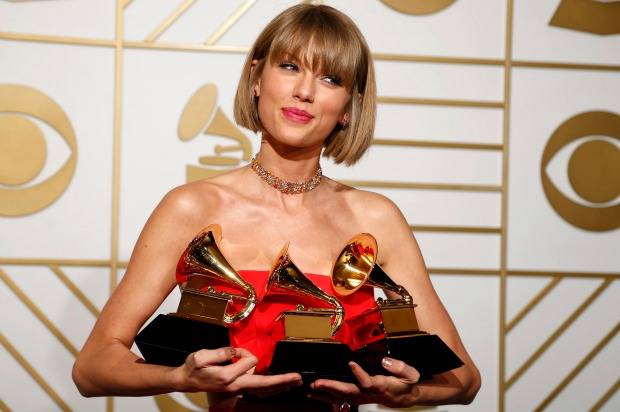 Monday night was full of red carpet couture, controversial performances and lavish honor at the Staples Center in Los Angeles.
The 58th Annual Grammy Awards were broadcast on CBS and a total of 83 awards were given out during the evening.
The program began and ended with pop superstar Taylor Swift as she performed “Out of the Woods,” a single from her newest album “1989” at the beginning of the program and ended the 3 1/2 – hour show by accepting her Grammy for Album of the Year.
The Album of the Year Award is the most prestigious Grammy award and was given to Swift in 2009 for “Fearless.” She is the first female artist to win the Album of the Year category twice.
When accepting her award Swift gave inspirational advice to all the young women like her working toward their dreams.
“There are going to be people along the way who will try to undercut your success, or take accomplishments for your success, or your fame,” she said.
“But if you just focus on the work and you don’t let those people sidetrack you, someday when you get where you’re going you’ll look around and know that it was you and the people who love you who put you there.”
Her Grammy speech was more than likely directed toward rapper Kanye West, who recently released a song with lyrics saying he was the one who brought Swift fame after the 2009 Video Music Awards (VMA) scandal in which West took the microphone from Swift during her acceptance speech.
“I think that Taylor is one of the most powerful female voices of our time,” said freshman pre-pharmacy major Lexus Frazier. “I’m a big fan of not only her music but what she stands for, and I loved her speech.”
Swift now has 10 Grammy Awards in her collection, three of which were added Monday night with Album of the Year, best Pop Vocal Album for “1989” and best Music Video for “Bad Blood” featuring Kendrick Lamar.
Lamar created quite the buzz for himself by the end of the night with his multiple awards and performance.
Lamar was nominated for 11 total Grammy Awards and won five categories: Best Music Video for “Bad Blood” with Swift, Best Rap Album for “To Pimp a Butterfly,” Best Rap Song and Best Rap Performance for “Alright” and Best Rap/Sung Collaboration for “These Walls.”
The rapper performed his song “The Blacker The Berry” while walking out as part of a chain gain locked inside jail cells. Lamar followed these striking images by performing “Alright” in front of a large bonfire.
“Alright” then shifted into a never before heard song that was accompanied by fast action camera shots that ended with an image of the word “Compton” over an outlined picture of Africa.
Sophomore marketing major Grant Kruszewski said he thinks that Lamar deserved the love he received at the Grammys on Monday night.
“His music is specifically targeting racism and social change,” he said. “He is one of the few rappers who is actually positively affecting the community and he received the key to city of Compton just recently.”
Additional performances throughout the night came from artists including Adele, Justin Bieber, Alabama Shakes, the Weeknd and more.
For the first time ever, The Grammys dual broadcast in New York City for a special live performance at the Richard Rodgers Theatre for a performance of the opening number “Alexander Hamilton” from the Broadway production, “Hamilton.”
This historical hip-hop musical showcases the life of one of our nation’s founding fathers, Alexander Hamilton.
“Hamilton” won Best Musical Theater Album to little surprise of the viewers after the performance.
Another special performance was a tribute to the late David Bowie from iconic pop diva Lady Gaga.
Gaga attributes much of her artistry to Bowie and recently got a tattoo of him in honor of his work.
Her performance included “Let’s Dance,” “Heroes,” “Space Oddity,” “Changes,” “Ziggy Stardust” and “Suffragette City” and was performed in true Bowie fashion with dazzling graphics and crazy costumes and choreography.
Besides Lamar and Swift, other big winners of the night included The Weeknd, Bruno Mars, Meghan Trainor, Alabama Shakes and Ed Sheeran.
The Weeknd won Best R&B Performance for “Earned It” and Best Urban Contemporary Album for “Beauty Behind the Madness.”
Mars won Record of the Year for “Uptown Funk” and Trainor won Best New Artist.
Alabama Shakes won best Alternative Music Album for “Sound & Color” and best Rock Performance for “Don’t Wanna Fight.”
Sheeran won Best Pop Solo Performance and Song of the Year for “Thinking Out Loud.”
For a full list of nominees and winners visit www.grammy.com.
OLIVIA BURGER
[email protected]