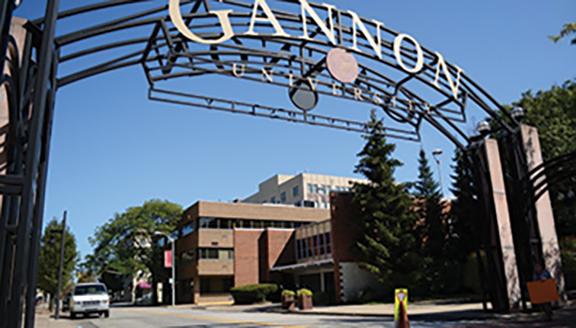 Gannon University will host high school seniors from throughout the country Sunday night through Monday for its annual Knight with Scholars program.
The Knight with Scholars program is designed to give prospective students a taste of what college life at Gannon is like.
High school seniors who have been accepted into Gannon and have been chosen to receive merit- based scholarships were invited to attend the overnight event.
Thomas Camillo, director of undergraduate admissions, said Gannon is hoping for around 90 students to attend the event, the average number of students who have attended Knight with Scholars in the past few years.
Camillo believes the Knight with Scholars program can help students make their final decisions about where they will attend in the fall.
“We believe that providing students with a small sampling of what the Gannon student experience is like can go a long way in helping students realize that this is the place for them,” Camillo said.
“It’s a chance for students and parents to really get acquainted with campus over a two-day period by asking a ton of questions to current students, professors and administrators.”
Students attending Knight with Scholars are placed with freshmen in their intended major whenever possible and spend the night in Gannon’s freshman residence halls.
Jessica Gaffney, a freshman occupational therapy major who attended the program last year, said that sleeping in the residence halls put college life into perspective for her.
“It was like a day in the life of an actual college student,” Gaffney said. “Shortly after the event, I officially made the decision to come to Gannon.”
Rachel Amorose, a freshman electrical engineering major, said that the event was different than other admissions events she had attended previously.
“I feel like I really got to see what it would be like to go here, unlike other events that Gannon had where you just saw the academic buildings,” Amorose said.
On Sunday night, prospective students will get to experience some of the activities the Recreation and Wellness Center has to offer, such as glow yoga and indoor putt-putt.
The high schoolers will also be able to test their knowledge of pop culture at The Knight Club with trivia.
On Monday, those attending Knight with Scholars will get the chance to sit in on a class in their proposed major of study, participate in a hands-on learning activity and talk to faculty and students.
Olivia Collins, a freshman physician assistant major, liked getting to experience a college class firsthand.
“I enjoyed sitting in on a medical microbiology class I would have to take in the future,” Collins said. “It was really cool because I actually understood [the class] because of an internship I had.”
To end the program, high school students will attend a lunch hosted by Gannon University President Keith Taylor, Ph.D.
Students will have the opportunity to sit with faculty members from their proposed majors to ask any questions they might have about the field or about Gannon in general.
In addition to the Knight with Scholars program, the office of admissions will host admitted students on select Fridays in March and April, Admitted Student Saturdays April 2 and 9 and “Overknight Visits” in March and April.
LYDIA FENNESSY
[email protected]