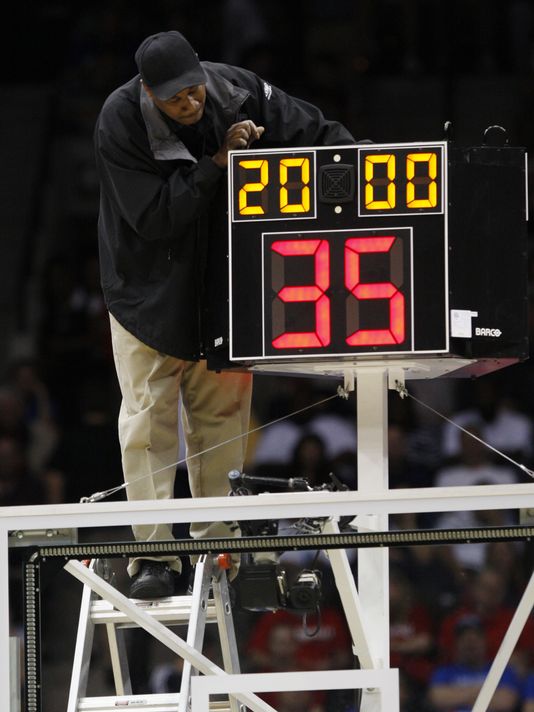 When the Gannon University men’s basketball team opens the season tonight at Clarion, new faces on the Gannon sideline won’t be the only thing different.

This year, the NCAA made numerous adjustments to men’s college basketball, in the hopes of producing a faster, more exciting  game

The biggest criticism, particularly in the last decade, has been slow play, and therefore unexciting.

Since 2000, college basketball scoring has declined year-to-year 13 out of the last 15 years. Teams shot later in the shot-clock era than ever before last season, spurring the NCAA to make drastic changes.

The majority of the rule changes pertain to speeding up the pace of play, as well as aiding the offense in an effort to boost scoring to make the college game look and feel more like the professional game.

The biggest rule change, and one that has gotten the most publicity, is shortening the shot clock to 30 from 35 seconds, the first time it’s been moved since 1993-94 when it was moved from 45 to 35 seconds.

This change moves the shot clock closer to the NBA’s 24 seconds in an effort to speed possessions up and encourage quicker offense.

In addition, in Division I the restricted-area arc has been increased from 3 to 4 feet underneath the basket, decreasing the number of block/charge fouls. The rule will be instituted into Division II and Division III in the 2016-17 season.

In terms of timeouts, each team only receives three in the second half, as opposed to four; live ball timeouts — starting when the ball is handed to the player on an inbounds — can also now only be called by players, no longer coaches.

All of these rule changes mean a faster, more efficient game of basketball without as many stoppages and micro-managing by coaches.

Another way the game should improve is less fouling, especially with the decrease in the need of block/charge calls. If it is a particularly rough game, these changes should allow officials to get their point across at the beginning of the game, allowing the rest of the contest to be more free-flowing, allowing the offense and defense to gain a rhythm.

There are a few other rule changes likely not to be noticed by the casual fan. One in particular is the flat 10-second count to get the ball across half court.

Before, if the ball was knocked out of bounds by the opposing team, the 10-second count would reset. Now, if a team has the ball knocked away with 23 seconds left on the shot clock, it means it only has three seconds to get the ball across half court.

This is another rule that is modeled after the NBA, with the exception that the NBA backcourt maximum time allowed is eight seconds.

This rule will particularly affect defenses pressing, and may see a bump in that scheme, therefore creating more turnovers. This is another way in which the NCAA is attempting to make the game more appealing to the casual viewer.

One other rule change that will slow the game down some but improve its accuracy of officiating is being able to stop the game to review shot-clock violations.

These are rules that will apply and affect officials more than players or coaches, but will help improve the accuracy of the game being officiated and also help separate technical fouls better than before.

Many coaches and players are downplaying the changes, but all have only seen the rules on paper, and not executed them in late-game situations, on the road, in crunch time.

The biggest adjustments will certainly have to come from fourth- and fifth-year players, seniors who are leading their team and are relied on most in those situations.

Coaches are used to the NCAA making adjustments every three to five years, and underclassmen are still building their foundation they rely on in college basketball.

Mistakes are bound to happen early in the season, and it won’t be long until a high-profile upperclassman player forgets the backcourt count rule change or doesn’t spot the shot clock in time in crunch time, and the clip gets replayed on SportsCenter for the next two days.

Senior Cory Bailey, a captain on the Golden Knights’ basketball team, said there will be an adjustment period to the rules.

“They are something that has to be stressed throughout this preseason and by the time we start playing games we’ll hopefully be used to them,” Bailey said.

Bailey said despite the many changes, it’s still no excuse to have mental lapses on the court – and he expects that coach John T. Reilly and his staff will see that those lapses don’t occur.

“It’s important that we don’t let them take away from how we play, and I believe that coach (John) Reilly and the assistants will do a good job of making that point,” Bailey said.

Despite the timeout and backcourt changes likely taking a while to sink in with players, coaches and referees alike, the other rules should lead to a more free-flowing game with less stoppages and interruptions to the gameplay. It’s what fans pay to see and why coaches coach and players play, for the love of the game.

“It should help to make our defense even more disruptive, and our offense will have to play faster, which is never a bad thing,” Reilly said.

Many of these rule changes have been a long time coming, with women’s college basketball having a 30-second shot clock for a few decades, and the NBA and FIBA (Federation of International Basketball Association)  both holding 24-second shot clocks for half a century.

“I think the college game has lost some fans in the last 10 years or so, especially with the ‘one and done’ rule,” McCaslan said. “But hopefully the shorter shot clock will increase scoring and bring some people back,”  said avid men’s college basketball fan and Gannon University freshman Dan McCaslan.