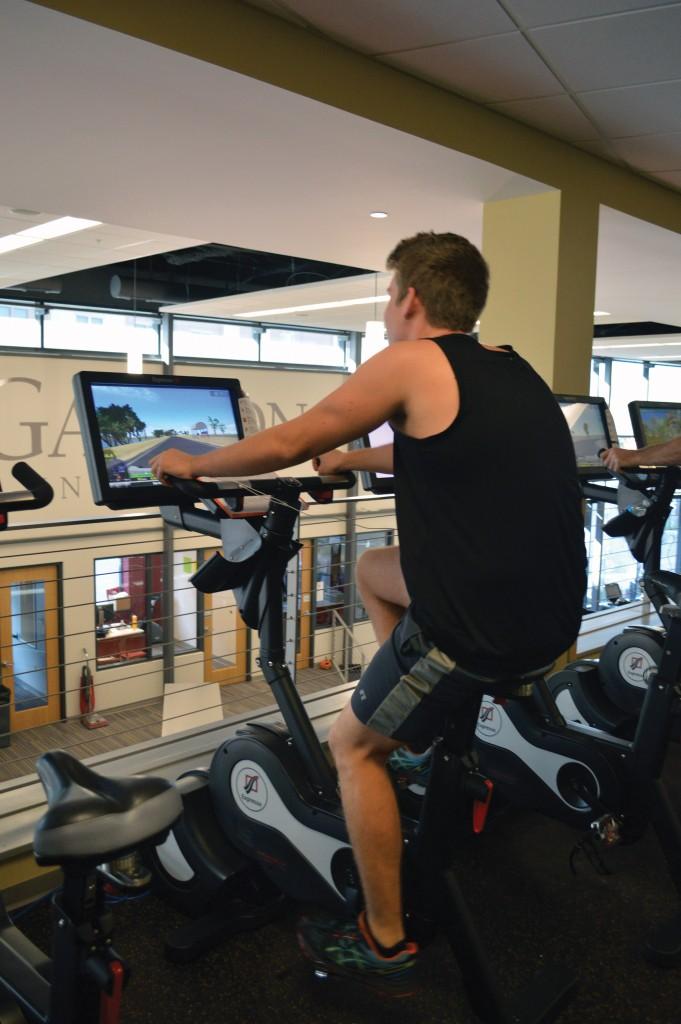 Gannon University hopes to come out on top this year as it competes in the Fall Frenzy Fitness Bike Challenge.

The challenge is sponsored by Expresso, the company that manufactures and sells the stationary fitness bikes found on the second level of Gannon’s Recreation and Wellness Center.

The interactive fitness bikes are equipped with screens that show virtual courses and records the miles of each rider who logs onto their Expresso Bike account directly from the bike’s screen.

Last year, Gannon beat out 128 schools before falling in the final round of the competition to Schoolcraft College of Michigan.

The preliminary round of the competition, which began on Oct. 6, featured 154 colleges and universities across the nation who competed for the top 16 spots in the next round.

Abby Quinn, a sophomore nursing and psychology major who placed first among women in the competition last year, said that Gannon’s strategy for the first round was to place high in the rankings.

After the two-day preliminary round finished, each of the top 16 teams were ranked and put into a bracket, modeled after the NCAA March Madness tournament.

“We knew we weren’t going to win the first round because Schoolcraft Community College has more bikes and bikers,” Quinn said.

“We just needed to place second or third to get on the opposite side of the bracket as them. Now all we need to do is keep up our miles to face them in the finals.”

Gannon took the third seed, beating out much larger schools like Penn State University and the University of Georgia.

In the first official round of the competition, which is called the “Super Sixteen,” Gannon competed against SUNY-Oswego and seeded 14th in the bracket.

Gannon easily overtook its competitor, outperforming SUNY-Oswego 819.6 miles to 326.5 miles to advance to the “Electric Eight.”

Gannon hopes to keep up the momentum against the University of Iowa in the next round of the competition, which began at midnight on Tuesday and will run for 48 consecutive hours.

In addition to the Fall Frenzy competition between schools, Expresso also recognizes the top 25 individual riders in the competition by giving them tournament honors.

Last year, the Knights took four of the top 10 positions, more than any other school in the competition.

At this time, Gannon currently has three riders in the top 25. Among them is Don Henry, head coach of the men’s wrestling team.

Henry has logged more than 150 miles in the first two rounds of the competition and is ranked 23rd.

Despite his impressive individual ranking, Henry said that his personal success is not important to him in this competition.

“I am not concerned about winning, just competing and adding miles for Gannon to win and make it to the next round,” Henry said.

If Gannon is able to bike more miles than the University of Iowa this week, it will advance to the “Fearsome Four,” which takes place beginning at midnight  Wednesday.