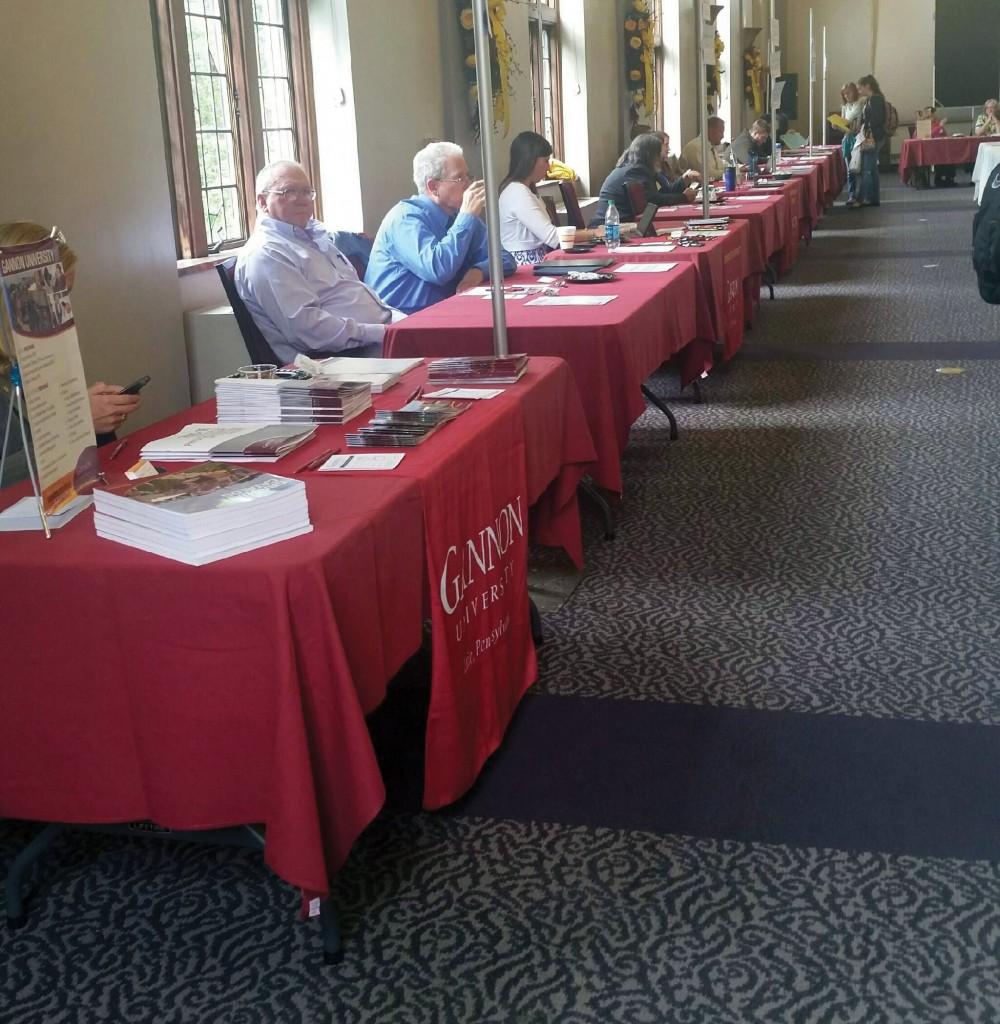 Representatives from Kaplan Test Prep were also invited to the event to help students gain acceptance to the graduate or professional school of their choice. The representatives offered information and guidance about admissions tests such as the MCAT and LSAT.

According to Puzar, previous years typically attracted over 200 students, mostly Gannon juniors and seniors, but she continuously encourages freshmen and sophomores to attend.

Puzar said the five $100 drawing winners and the winners of a competition in which clubs and organizations are awarded cash prizes for having the most members register and participate as well as the number of students who attended will be announced Wednesday morning.

Puzar also said that each year, Gannon extends the fair to students of Penn State Behrend, Mercyhurst University, Edinboro University and other schools and people of the community.

Law schools were situated on one side of the room, health programs were grouped in another area and the rest were organized alphabetically. Upon entering, students were handed an approximate representation of the floor plan.

Representatives from all over western Pennsylvania such as Clarion University, the University of Pittsburgh, Duquesne University and Slippery Rock University made their way to Gannon to present their graduate programs to the students.

Distant colleges and international graduate programs were represented as well. Across the Pond offered information about graduate schools in the United Kingdom.

Thomas Morrow, senior associate director of admissions at the University of Medicine and Health Sciences (UMHS), discussed the curriculum and admission requirements for UMHS, which is located on the Caribbean island, St. Kitts.

Graduate schools here and abroad were not the only options represented at the event. Sara Nesbitt, program coordinator for Gannon’s Center for Social Concerns, was at the fair introducing another possibility for students.

Nesbitt suggested that students volunteer after completing their undergraduate degree.

She came equipped with handouts providing information about a variety of service opportunities with AmeriCorps, City Year, Peace Corps, World Teach and many more.

Nesbitt also discussed the opportunity to be awarded scholarships.

For volunteering with AmeriCorps, a student could be awarded the AmeriCorps Segal Education Award. Over 100 graduate schools across the country will match the amount if you choose to complete one of their programs.

“The fair had programs that I was interested in,” McGarvie said.

She said she received helpful information about Gannon’s Master of Science (Concentration in Anesthesia).

A list providing the websites of all the graduate schools that attended the fair, Kaplan Test Prep and Across the Pond can be found at www.gannon.edu/gradfair.