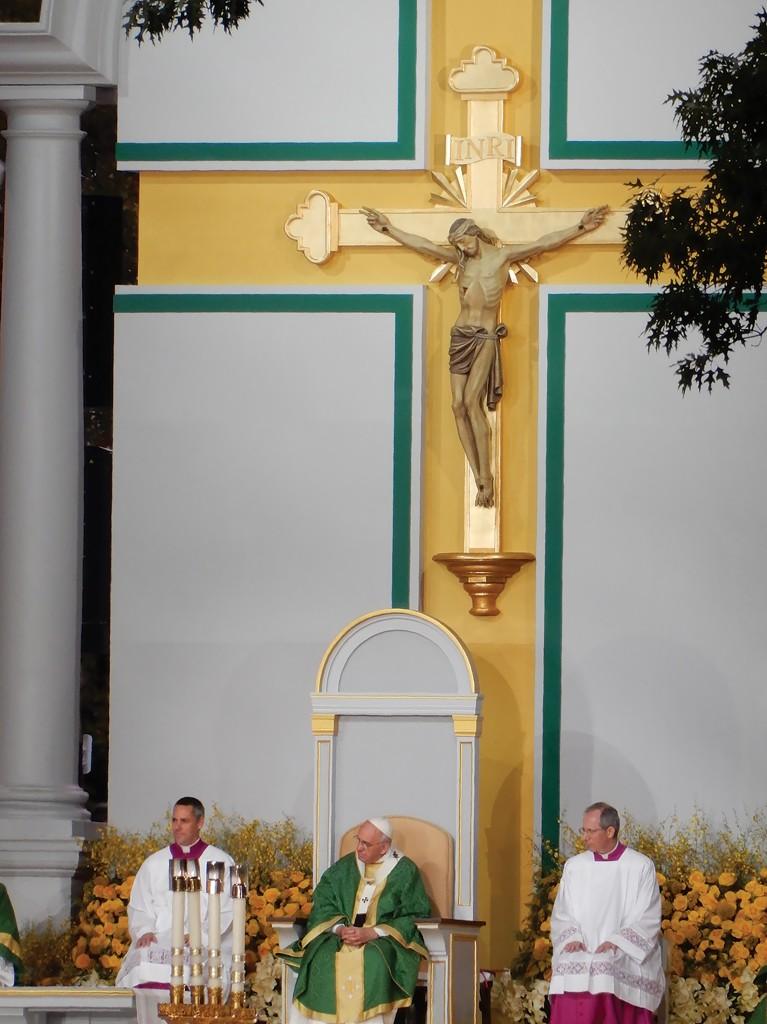 Lay people and religious kept busy with prayer, confession opportunities, visiting vendors and meeting each other on the dusty grounds of Benjamin Franklin Parkway until the papal Mass began Sunday.

These people were part of the crowd nearly the size of Philadelphia’s 1.5 million population gathered for the World Meeting of Families.

Pope Francis processed through the parkway and blessed babies carried over by secret servicemen as people cheered “vive el papa.”

Anna Lacy, a freshman occupational therapy major, said the best part of the papal trip was going to Mass.

“Even if you can’t talk to him, you’re publicly seeing the face of the church,” Fuga said.

Mass was held in the grass to accommodate the masses of people as they chanted Latin prayers and the Our Father with the papal group at the altar.

Francis delivered a homily in his native language on the importance of acceptance and the institution of family. He said it is dangerous to think God’s spirit cannot work in people different from us.

The pope said that the Holy Spirit shows up in small gestures like the warm supper people look forward to or a hug when they return home.

“Love is shown by little things, by attention to small daily signs which make us feel at home,” Francis said.

He said that faith grows when it is lived and shaped by love, and that is why families are true domestic churches.

Because faith starts at home, Francis stressed the importance of keeping family units strong. He said the common house can no longer tolerate sterile divisions.

“The urgent challenge of protecting our home includes the effort to bring the entire human family together in the pursuit of a sustainable and integral development, for we know that things can change,” Francis said.

Francis said faithful families need the help of the Holy Spirit to serve as good role models and acknowledged the families who attended the festival as miraculous.

The pope said any family who wishes to raise children to fight against the sway of evil is appreciated by the Church, no matter what religion they practice.

The Mass moved on with Communion rites in Latin. A line of about 100 priests walked into the crowd to distribute communion accompanied by ministers holding yellow and white umbrellas and the World Celebration of Families logo.

The crowd migrated to the umbrellas in a motion both fluid and jumbled in order to receive Communion.

“For me, Communion was a beautiful moment,” Chris Beran, the director of the Bishop Trautman House, said. “Seeing the desire to receive, you realize the people that got pictures and left had a hunger that wasn’t satisfied.

“It’s more than seeing Pope Francis. The world’s hungry out there and experiences like this helps satisfy that hunger.”

Bethany Lewis, a senior English major, said she found some of the negativity at Mass was harmful.

“People were pushing you and distracting from the experience,” Lewis said. “We’re here to celebrate peace and there was unneeded grumbling.”

Nathan Demarest, a junior education major, said he did not notice the negativity as Lewis did.

“I can’t think of anything to complain about because we got Communion and saw the pope a couple times,” Demarest said.