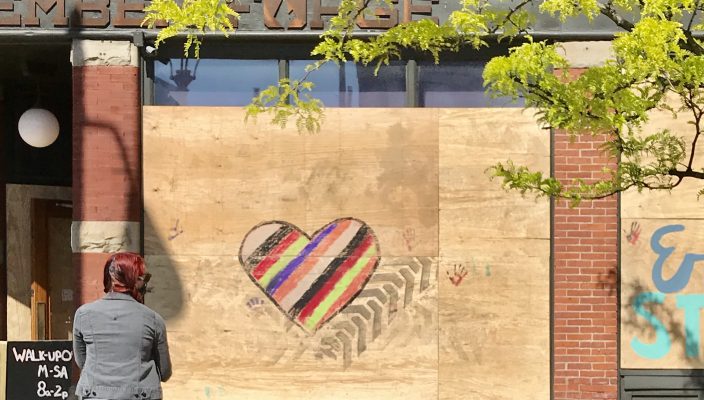 Student reacts to riot near campus

I’m really confused and not sure what to think. On Saturday, a peaceful protest took place in Perry Square and the streets of downtown Erie in response to the police brutality toward George Floyd and the other black lives lost. Those who took part called the protest empowering and positive. They were met with lots of support and solidarity from community members.

As the sun set, however, a new group of people swarmed the familiar streets that surround Gannon’s campus and a crowd gathered at the Erie County Courthouse. Rioters vandalized the courthouse, breaking a window and spray painting the exterior. Members of the crowd threw items including water bottles and fireworks at the police officers when asked to disperse.

As the situation escalated, all off-duty officers were called in, the Erie Police SWAT Team, Millcreek Police and Pennsylvania State Police all lined up on lower State Street. Fireworks and tear gas were released into the crowd and the sound of ambulances could be heard as someone was shot in the leg. Certain rioters set ablaze local businesses such as the Erie Otters office, while local businesses Ember + Forge, Tap House and multiple other places had their storefront windows broken. By midnight, Mayor Joe Schember issued a state of emergency.

My heart is torn because through these actions I can see the pain and the desperation for justice that the black community deserves. Some have been angered and are fed up; some have grown tired and weary from fighting but still go on. The way the black community expresses their feelings is not something that I have the right to judge. I am not here to tell people how they are allowed to mourn.

I also woke up Sunday morning to see the pictures in daylight of business owners sweeping up glass on the sidewalk, picking up the pieces that used to be their storefront. My heart breaks for these businesses where I can recall sitting in for coffee between classes, having dinner with friends or discussing the future of the city in the Cashier’s House with members of the Erie Downtown Development Corporation. These business owners did nothing and were still targeted in this riot. It seems as though it won’t fix anything and it’s unfair to those business owners. At the same time, I know peaceful protest did not work and the riots are bringing attention to the action that should be taken. I’ve heard the arguments that these businesses were built on stolen land and the backs of the enslaved. This injustice is longer than the past few years since Trayvon Martin.

I know I’m still largely uninformed. In school I was taught that racism doesn’t exist anymore, although I know that is not the case. Sure, there aren’t as many hate crimes or racial slurs, but victim blaming, cultural appropriation, colorblindness and claiming reverse racism are all forms of racism that take place often, and I was not taught about them.

I don’t mean to generalize the riots at all. There are some riots where the police act poorly and use unnecessary force. In some cases, there are white supremacists who are sneaking in and escalating the matters to make it look like the black community is being more violent. What I’m focused on right now is my own city. The place I grew up and always thought of as safe, I am now hesitant of. Yet this is the same feeling that people of color feel when they see a police officer or walk down the street.

I’m ignorant when it comes to the matter. This cannot be compared to the past because this is our impending future and it must be taken seriously. I will never understand what this community has been through, and there is no way for me to understand, but I do stand for those who need my help. The problem is, I don’t always know how to help. I hear the guttural, pained scream that overtakes your every action. I see the senseless violence that killed innocent people. Your peaceful protests are extinguished at the same time that it lights a new match. The fire physically manifests your struggles in an attempt to silence the daily animosity.

My heart is broken for my city, but I am here to listen to you. No matter how your speech is displayed, I want to learn from these experiences.