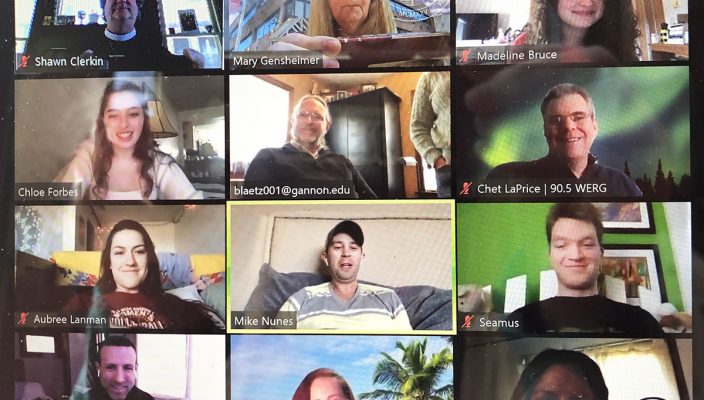 Mike Nunes fondly recalls his time at Gannon University as a communication arts major, saying Gannon gave him a large-scale education with a variety of different skills that helped him gain an understanding of what he did and didn’t want to do.

Torn between education and communications, Nunes said he credits his decision to MC Gensheimer, the co-chair of the School of Communications and the Arts. Genshiemer remembered recruiting him, saying, “I knew Mike was smart and funny from the moment I met him. He had a puckish grin, a twinkle in his eyes, and an uncanny ability to ask good questions. He had all the symptoms of ‘COMART-itis.’ We were glad he joined the team.” Reminiscing, Nunes chuckled as he remembered how he use to splice by hand reel to reel with former program director AJ Miceli.

“I spent four great years at Gannon and got my degree and realized I didn’t want to go into local news, which was at that time sort of the biggest opportunity before social media and computers took over,” said Nunes, who graduated in 2001.

Instead, Nunes took the nonconventional route of attending Syracuse University for a graduate program in TV, radio and film. There, he said his education was more segmented, and he learned skills in production and building a set, skills that would be beneficial in a career in New York or California. That’s just what he did.

Upon graduating from the one-year program, Nunes took the leap to Los Angeles where he slept on the couch of a Syracuse alumnus for a couple of weeks while he secured an internship at Toll and Robins. Toll and Robins was a younger teen space, producing TV shows like “The Amanda Show,” “Smallville” and “One Tree Hill,” among many others. From there, he moved up the ranks to office personal assistant and eventually became an assistant to an executive. Nunes said that the best learning opportunities there came from a specific real-life experience.

“The best way to learn is to be on phone calls,” Nunes said. “Whatever you learn in a textbook in never going to teach you a situation. We’re in the people person business.”

Nunes transitioned to NBC in 2004, where he is now the senior vice president of current programming. His position deals with the creativity side of production and connecting people with resources to make sure everything runs smoothly.

“On an elemental level, every TV show that’s on the air, whether it’s a scripted television show or whether it’s an alternative show or reality show, has a current executive assigned to it, which is the liaison essentially between company and writer(s), producer(s) and talent on a day-to-day basis,” Nunes said.

He explained that any issues or questions usually go to the creative department first to discuss and better understand where the story is going, and his position allows him to be the temperature reader who gauges how a situation is handled.

Nunes has worked on seven shows, which is a heavier workload, but some of the biggest shows are “This is Us,” “Brooklyn Nine-Nine,” “Superstore” and “Council of Dads.”

Working in the creative department, Nunes said controversial topics certainly do arise sometimes. Speaking on behalf of one of his shows, “This is Us,” he said the showrunners, including producer Dan Fogelman, pitch the whole season and give the major touching points. While things can change, the team hears everything from the beginning.

“This is Us” covers topics of obesity, mental health and alcoholism. Fogelman had a strong connection with the topic of obesity, as it has affected someone in his family, and Nunes said mental health became an issue that touched a lot of people in the writers room. To avoid picking any one side of the topic, like any show they produce, experts were brought in to review the show and give presentations on the accuracy of these issues in real life.

Nunes said the experts “sort of work as a backstop to make sure the representation that we’re doing on air is as real and authentic and to the truth as it can be.”

In these group settings, Nunes explained that there has to be a mutual understanding of each other and how decisions impact other people. Each person has his/her own problems, and in a collaborative setting, Nunes’ team is very open about discussing those problems and putting together a presentation on how to solve it. Nunes emphasized that they have a “no-a—— environment,” in which they remain cognizant of how their decisions impact each other as well as those not at the table, who have jobs that depend on the outcomes of those situations.

The largest problem to come occurred this year, as the global pandemic took hold of the industry and abruptly stopped production.

Fortunately, “This is Us” was done filming, but “Superstore” was not yet finished. It was one episode short of the season finale, but based on the script and some editing techniques, Nunes said the last episode is able to act as the finale.

In the entertainment world, a lot of writers rooms are still meeting virtually, and creatives are able to outline scripts from home and do notes over the phone. They are also looking at self-taping capabilities for talent now that devices like the iPhone have the filming capability to be broadcast on TV.

Nunes said it’s crucial to always be open to where ideas can come from in this trying yet transformative time.

As a piece of advice for Gannon students, Nunes said to never be afraid to reach out to other people.

“Once you’re getting close to crossing a line, people will tell you,” he said. “Ultimately, no one is going to push that rock up the hill for you except for yourself.”