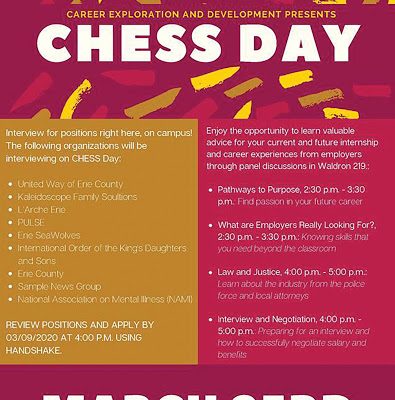 Due to the COVID-19 pandemic, campus closure and switch to remote learning, Gannon University’s inaugural CHESS Day was canceled, but that didn’t stop the event’s planners from creating opportunities for students to learn about possibilities in the humanities.

Staff in the Office of Career Exploration and Development worked hard to create a virtual CHESS Day for students to utilize. Stacy Ress and Erin Hart successfully switched the March 23 event to function online so students could connect with employers and gain advice for future careers.

All of the panels were conducted as planned and recorded for students to watch on Handshake, and Ress said she hopes these virtual panels will be just as helpful to students as the in-person version would have been.

“We hope the information covered resonates with students and hits on the things that they have the most questions about,” said Ress, assistant director for career preparation.

The panels give students the opportunity to learn about interviewing skills, negotiation skills and pathways to follow after graduation, said Hart, the office’s associate director of employer relations.

Interviews were also conducted virtually, and students who signed up for interviews with selected employers prior to the campus closure were able to either have Zoom or phone interviews. Ress said 24 interviews were successfully conducted last week, and Hart said a few students already received summer internships from their virtual interviews. Interviews are still occurring remotely.

The goal of CHESS Day from the beginning was to expose students to opportunities during their time at Gannon and after graduation. That goal was still met, even amid COVID-19 chaos.

“One of the goals of CHESS Day was to connect students and employers to foster career development and exploration,” Hart said. “Staying connected during this time is also extremely important for our well-being.”

Opportunities like this are also important specifically for CHESS students, whose career paths are nonlinear, Ress said. Events like CHESS Day are even more important for this reason.

“Being able to gain exposure to potential employers and industry insight can help make navigating that nonlinear path less intimidating,” she said.

While the event was not conducted as planned and students could not interact with panels and future employers in person, there are some positives to the situation. For one, Ress said students are able to see beyond the classroom and begin thinking about their lives beyond Gannon. Second, it helps with digital proficiency.

“This will help students build their competency with digital technology and communication,” she said. “We have seen the trend of employers moving to virtual interviews growing, and this pandemic is going to accelerate that trend.

“Being able to help these students navigate this new reliance on virtual connections will help them adapt to and thrive in this new virtual world.”

Despite the sudden change in plans for the event, students and faculty reacted well to the virtual version of CHESS Day. Ress said those who were interviewed said they went smoothly, and the panels were well-received by students who watched them.

Medina Klino, a junior accounting major, had virtual interviews with two organizations: a not-for-profit and a governmental organization. While the interviews were virtual, Klino said she had three interviewers for each organization, and while it was still intimidating, the virtual version helped to calm her nerves a bit.

“I think that interviewing virtually was much less nerve-wracking than it would have been if the interview was face-to-face,” she said. “I was at home, in an environment that I was comfortable in. Essentially all I had to do was talk.”

Klino also said that having this opportunity was crucial to her future career pursuits. Even though it was virtual, the experience still helped her prepare for job hunting, something she said will come sooner, rather than later.

“I personally feel grateful that CHESS Day was not canceled merely because of the opportunity it presented to students,” she said.

While the event may not have gone as planned this year, the Office for Career Exploration and Development fully intends to bring CHESS Day back and in person in 2021. Additionally, the office is operating as normal, just in a virtual manner.

Staff is available to help students through virtual appointments with resumes, cover letters, graduate school applications and much more. Schedule an appointment by reaching out to a career team member or email career@gannon.edu.